Bigger is Not Always Better

I've always been attracted to the smaller less grandiose art pieces on the playa at Burning Man. 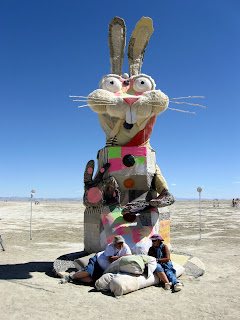 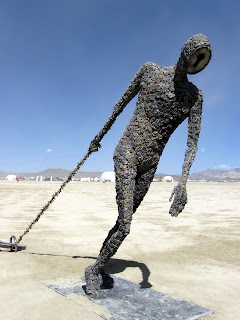 This man is about 10 or 12 feet tall made completely out of padlocks and keys by one person. 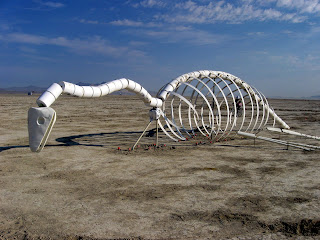 The dinosaur was made from 5 gallon white buckets for the spine. I think the ribs were bands of white plastic material. The flippers were plastic folded over. From a distance this looked so real. 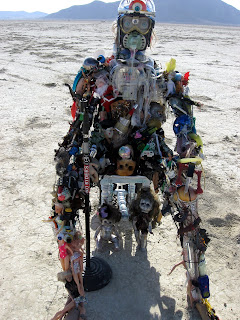 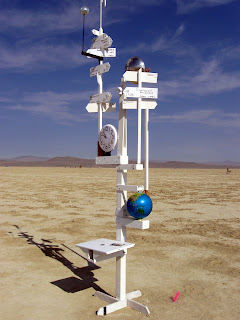 Then you see a speck far away and ride towards it. When you arrive there is a man sitting on a chair made entirely out of little toys and dolls. The next speck on the playa turns out to be a sort of sign post with distances to various parts of the worlds equipped with meaningless gadgets that really do nothing but look like they belong. 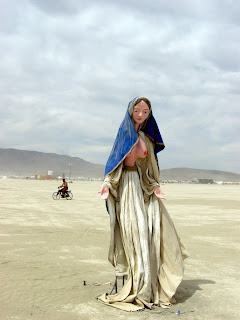 Sometimes you come up on an art piece quite unexpectedly as I did with this lady Madonna. 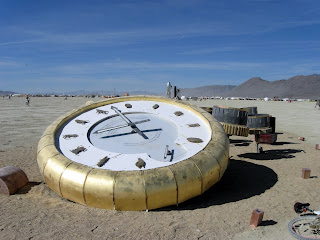 In case you wanted to know what time it was...
note bike wheel in order to get an idea how large the pocket watch was.

This though I was really fascinated with and I can't explain why. Maybe because the artist (the woman with the white cap) was so enthusiastic, especially when you saw and understood what she was making. She called it something like The Plague of the Mormons [Crickets]. Each cricket she hand made. The little ones had just hatched from theirr green egg mass with the two large parents herding them along. She had a tape playing a loop of cricket chirping sounds and at night they were lit up. I would never have found this had I not done my usual ride along the perimeter fence 2 and a half miles out from the City. That too impressed me for she was out here all by herself creating her little art piece that you couldn't see from a 100 yards away. 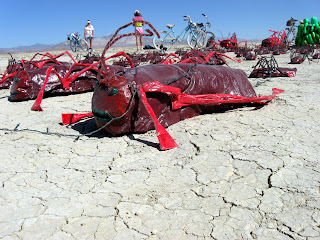 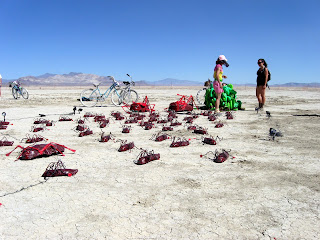 A lot of the art is interactive. You can climb on it or do something with it and be part of it. Any place other than Black Rock City you wouldn't be able to do whatever without first signing a waiver acknowledging that your participation may result in serious injury or your death. Or perhaps the device wouldn't exist at all due to insurance companies and legal ramifications. This one I just had to do. I don't think  you could really hurt yourself on it but losing a layer of skin or two to astro turf burn was a definite possibility. The Astro Turf Slide of Death. 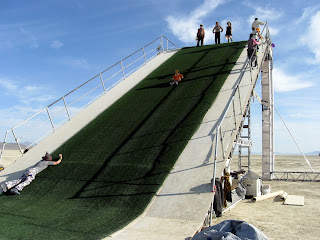 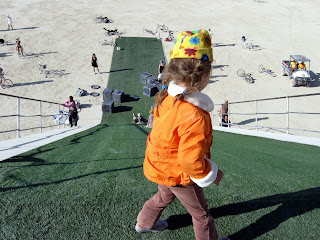 Okay the truth of the matter is when I saw this little girl doing it, then I had to. There was no turning back.

Here is another piece to climb on. It doesn't look like much to do but when you get to the top, and it is moving, it gives you something to think about. Now if you remember being a teenager, you'd never give it a thought. Nowadays I think a lot. Each year there is always something high and perilous to climb. 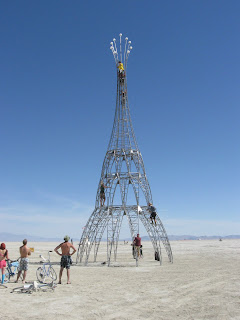 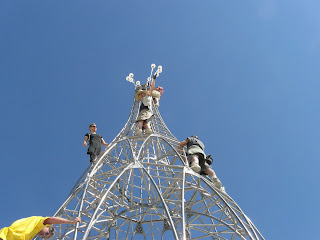 Yep that's me and that is all the higher I went.
Posted by John @ Beans and I on the Loose at 3:14 PM