I shamelessly lifted the following from another blog. I don't do Facebook, refuse to join the cult and see no real value in it. Maybe someone can educate me.
Facebook users:

If there was no Facebook, what would you be doing with your time?


What is it that Facebook gives you that real life is not?


Are your connections to Facebook friends more real than your physically present friends?


Where do all the things you put on Facebook end up?


Do you wonder how many servers it takes to house all the stuff on Facebook?


Do you consider how much electricity it takes to run those server arrays and storage devices?


Do you think the cost of that energy expense should be added to your personal carbon footprint?


What did you do with your time and your life before Facebook, Twitter, Blogspot and the trend of over sharing on the Internet?


Not judging, Just wondering and guilty of having blogs too.

I'll take that last question a bit further in asking myself what I did with all that time before computers.

Among the blogs I follow, one is by a woman traveling around the country in her RV. She recently made a post about how she would get frustrated by a poor Internet signal. She would become agitated, increasingly uncomfortable and start to realize that her compulsive interaction with her phone and Internet was worsening her mood. She shut her laptop down, made a cup of tea, sat outside and enjoyed watching the sun set over the lake. She didn't turn her computer on for an entire week and thus, the followers of her blog, heard nothing from her for the same period of time.

I sat back and thought about what I had just read. I came to the conclusion that she was right. All the time I have been on the road, the only aggravating and frustrating moments I ever had was while trying to download e-mails, responding to those e-mails and making a post to my blog. When I was finished, which included several stop and go's at motels, coffee shops and any other likely prospects in attempting to find a strong Internet signal, I had blew off a couple of hours. Precious hours that could have been used enjoying the scenery or reading my book in camp.

I thought back to when I was a kid and then when I had my family, how pure and simple a family vacation was with no electronic devices except for a transistor radio that you brought along and never used for all that you could get on it was static. 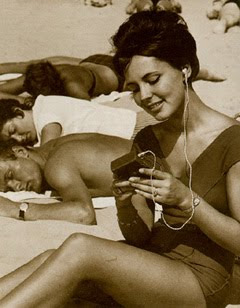 Oh by the way, I just spent over an hour composing this post for my blog. Wonderful.