Something I Haven't Done in a Long Time

This was on Day One of the trip to Bonneville.

Over the years, for a road trip out Highway 50 (The Loneliest Highway in America) in Nevada I have found a very convenient camp area at Lahontan Reservoir south of Fernly Nevada. This is about 6 hours from home and when I wake in the morning I feel well on into my adventure having put California behind me. Usually no one is there in the camp areas along the shore. When I arrive I am ready to stop and have a cup of tea, relax and look out over the lake and watch the sun set. This time was no different except someone was parked in my usual spot beneath a large Cottonwood. No problem I thought, as I drove on down to the next pull-off. Here I spotted another large Cottonwood for shade and wheeled in down the slope, turned to lined the RV up to back in and...I was going nowhere. Stuck.

Other than times in the Land Rover when fellow Land Rover owners were with me and we would be doing silly things just to see if we could without getting stuck, which we usually did, I've only got stuck one other time. That was over 40 years ago in my Chevy Van at Pismo Beach. Either we got a tow truck or someone helped us out, I don't recall. Now here I was, front wheels buried to the rim in soft sand that I did not know existed and miles away from any help. Gee, and I so much wanted to do nothing but sit down with a cup of tea.

Twenty minutes later after several tries and a fair amount of digging and sand removal I was able to back the View up the mere 5 feet needed to be on firmer ground. Once there I did not stop. I threw it into drive and powered back up the slope, walked back down to retrieve my shovel, and with a huge sigh of relief moved on to the next pull-off. Here I checked the ground out very carefully, pulled beneath another Cottonwood Tree and exchanged the tea idea for a cold beer. 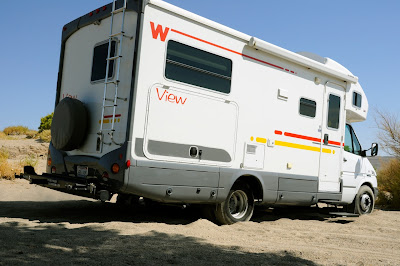 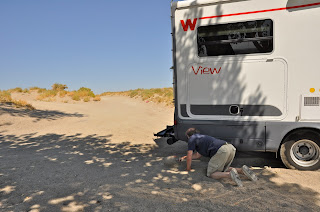 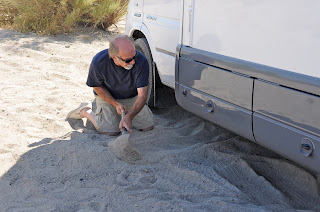 Not an activity I want to take part in ever again at this stage of my life.
Posted by John @ Beans and I on the Loose at 5:56 PM