I rode a new trail in the park yesterday, one I have not been on before. I had been putting off doing Marsh Trail thinking it would be a long relentless climb on a narrow rock strewn track. Plus, once at it's end you are miles well into the park and if I am hurting by that point, it may not be all that pleasurable coming back out. I also planned to pack a lunch and see how it would go carrying a sandwich and shorty soft drink in a fanny pack. Last week I went to the store trying to find a small backpack to wear as I see other mountain bikers doing. I don't care to wear backpacks for my back gets real sweaty and thankfully, I couldn't find anything to fit my needs so this forced me into the fanny pack trial. Lastly, I planned to take it easy and do the ride at a slower pace than usual. Hopefully I wouldn't peter out as soon and could ride further.


Four and a half miles into the ride I turned onto Marsh Trail. It proved to be a gentle grade with no get-off sections and I was liking it. Midway I could hear a bike coming up behind me as I was sweating and puffing along. I pointed to the track beside me to let him know I knew he was there and to pass me on that side. As he passed he said "How you doing?" I replied "Not bad for an old man" whereupon without hesitation he came back with "You're up here." As he rode away uphill I thought about that thinking he was right. I am up here and I rarely see anyone else of my age riding mountain bikes in Annadel. I wish I could always think like others do about what I do. 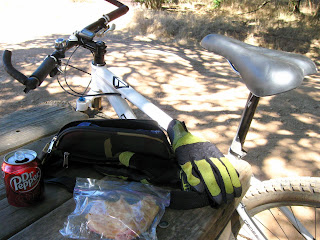 By the trails end I was really enjoying it. Marsh Trail gets my vote for the best in the park. I met the same guy at the picnic table and we visited for awhile. I thanked Brian for his remark and found out he was 10 years younger than I. He told me if I liked Marsh so well I will even more so for Bay Ridge. It is the last remaining trail I've not been on as it is even further out and I didn't know what I would be getting into but based on what Brian had to say about it, I am now looking forward to the Bay Ridge trail. My lunch on the fanny pack worked out real well as I hardly knew it was back there. Best of all the sandwich wasn't smashed.
I had planned on returning by South Burma Trail as I've been on it before and is good for going down on. But this Marsh trail looked like it would be even more fun for a return trip so I doubled back on it and was not disappointed. A good ride, taking my time and having lunch along the way. Although Brian was riding much further than I did, he too said just taking your time, stopping often and enjoying the view is what he does. Yep, that's the ticket and I need to practice that more often. 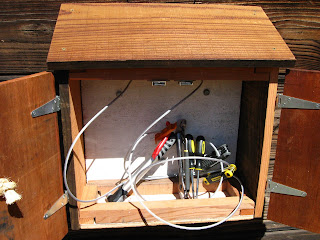 I've noticed these boxes being put into place on the pit toilets around the park this summer. I don't know who is responsible - local bike shops, bike clubs or just some individuals but it's a nice thing. Threaded onto the very long cable (so that nothing disappears) are all the tools one would need to make a repair or fix a flat tire on their bicycle. Included is a tire pump, tire removing levers, pliers, phillips and straight blade screwdriver, adjustable wrench and two sets of allen wrenches. Pretty cool.
Posted by John @ Beans and I on the Loose at 2:45 PM