The Cellphone and the Gift Cards

I have a cellphone. The only person I ever call is my wife. Then usually it is only if I am in the grocery store for example. "Hi. I'm in Safeway. What kind of flour am I suppose to get? There's quite a few different types here." The only person who ever calls me is my wife. Most of the time I never hear the phone ring since I am riding my motorcycle or bicycle, have the music too loud in the car or forget to turn the thing on which I hear about when I get back home. "Why have a phone if you never turn it on?" The last two times she called me she had to leave a message. "But I had it on" I pleaded in my defense. I tested it at home and sure enough the phone went to the message saving part instead of ringing. After fiddling with it for way too long, I went to the phone store. As I walked in carrying the phone in my hand, the sales guy's eyebrows went up. I explained what was going on and he immediately said that my phone was so old they had phased out the frequency or whatever it was operating on. They gave me a new updated model which contained a camera. That in itself is a whole other story but I eventually got the hang of using the camera part.

As I wrote in a previous post our family has this drawing names thing for Christmas gift giving. I feel sorry for the poor soul who draws my name. Therein  lies another whole story or post. I tried to make it easy by suggesting a gift card at a book store. Come Christmas day I got a package full of little items from that unlucky one. He did good. Part was a Barnes & Noble gift card plus another one for Peets Coffee. For those of you not living here on the left coast of the U.S., think Starbucks but only better. So on this rainy cold day I went downtown to cash in on my book card, walked across the street for a coffee drink and sat outside watching life go by as I sipped my mocha. It wasn't until I was wondering what time it was I remembered my phone would tell me, and then thought of the camera feature. "I could have been taking pictures!" 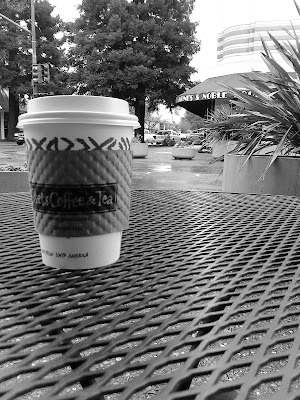 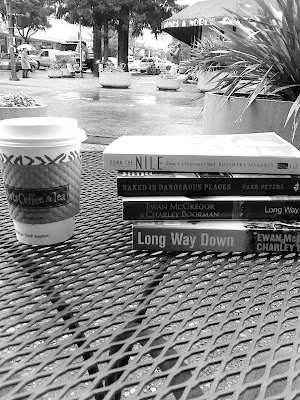 I don't think this is too bad at all for a cellphone camera. I set it for black & white since I feel urban pictures look better that way. 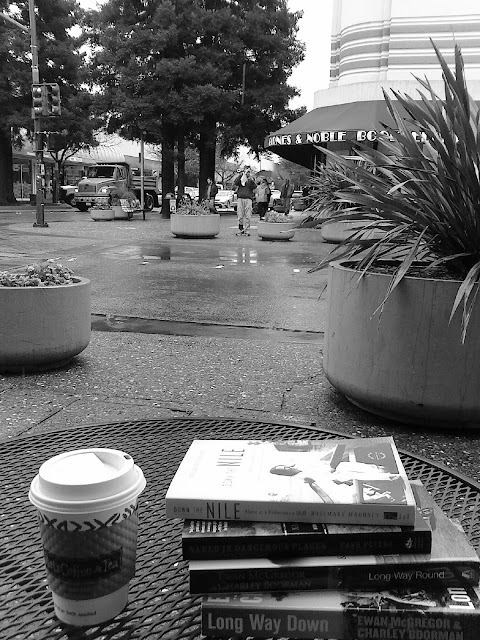 Notice the guy on the corner playing the horn. He'd switch from it to a sax, then flute and back pretty much playing the same rambling slow tune which I think he was making up as he went along. Ocassionally he would march in place trying to keep the circulation going in his feet.
Posted by John @ Beans and I on the Loose at 2:49 PM