A short story I was reading lately went like this: Three young men in two separate vehicles were travelling in the deep dirt back roads of Baja California. As dusk approached one of the four wheel drive cars began to overheat. They stopped, checked out the problem and saw that the radiator was dry. After adding more water they started the engine and water gushed out along the seam of the outlet port of the radiator. With no means to make a repair and many miles from the nearest road their situation appeared bleak as darkness settled in. Soon they heard a dog bark and out of the light mountain mist ahead appeared a man carrying a rifle with a dog trotting alongside. One of the young men spoke a little Spanish and learned that the scruffy dirty looking little man’s name was Manuel. He lived alone nearby in an abandoned rancho. He told the gringos that he thought he could fix their radiator for them but it was too dark to do so now and invited them to spend the night at his little adobe.


Manuel’s home was a thatched roof, dirt floor, one room shack. He held his hand over his heart and said “I have very little, but I give with all my heart”. With that he went outside to collect some eggs to prepare a meal for his guests apologizing for not having any tortillas. One of the men pulled a large bottle of wine from his coat and Manuel’s face lit up. After a very unique and unusual meal (which is what this post is about) they decided some whisky was in order and so retrieved a bottle from the vehicles. As they drank each had stories to tell, one topping the other. But it was Manuel’s stories that intrigued the men most. He told about lost mines he knew where there was gold and showed them a small lump of quartz he had tucked away in a pouch. The guys were unable to discern any gold in the small stone, but what did they know about gold prospecting. Manuel said how he would soon be rich and have many women. The whisky bottle made another round. Quickly Manuel asked if they knew of Pancho Villa. Then men nodded. Pointing to a beaten old pile of leather he said “Pancho Villa rode in that saddle. He was a great general and was from Sonora. I am from Sonora.” The men listened with amusement and more whisky was consumed. Manuel grabbed his rifle leaning in the corner. “This rifle was in the Mexican revolution. It has killed many men. Many men.” The whisky taking its effect he dizzily sat down pulling a handful bullets from his pocket. The boys nervously raised their glasses and said “To Pancho Villa, the great general, and the revolution!” Manuel then asked “Do you know why I now live in Baja California and not Sonora?” Trying to smooth the atmosphere one of the young men hoisted his glass and said “Let’s drink to Sonora”. They suggested because of the gold he was here in Baja. Manuel proudly drank to Sonora, put the bullets back into his pocket then went on.

“Yes I am here because of gold but also because I killed a man in Sonora. He was cheating at cards. I didn’t have my rifle then so I killed him with my knife. He was a big man but I am fast. My knife was big. I don’t have the knife anymore. I left it in the Indian. Damn Indian. I had to run from the Indians so I went to Sinola. And what do you think? I killed another Indian, this time over a woman. So now the police were after me and I run away to Baja.” By now his head was hanging low to the table and he murmured his last words for the evening, “And now I am going to get rich and find gold.” They boys laid him in his lumpy bed and covered him with his filthy blankets snickering about fanciful tales of lost gold, Pancho Villa, a revolutionary rifle and two dead Indians. Never had a bottle of whisky talked so much.

The next morning they repaired the radiator and left a hung over Manuel in his bed to sleep it off, leaving a big lock-back knife on his table as a thank you gift. A week later in Bahia de Los Angeles by chance they met the man who owned the land Manuel lived on. “Was he kind to you?” the land owner asked. With a chuckle they told him how he was very hospitable, he fed them and they gave him whisky. With deep concern he replied “Oh senores, you should be very careful with who you drink whisky with around here. Manuel can be very violent when he is drunk. He’s already killed two men that we know of.”

The writer concluded, “So okay, Manuel is, indeed, a murderer and there probably is some truth the stories he told.” He added that it was his little culinary offering that impressed him the most and to this day he makes it often whenever he has guests. It is always a hit. He included the recipe at the end of his story and I just had to try it.

6oz. can of tomato sauce

Sauté the vegetables in manteca over medium heat until soft. Add tomato sauce, salt and pepper. A dash of Worcester is good, too. Cook five minutes over low heat. Stir in pasta and cilantro. Push the pasta outward from the center, making a space for the eggs. Break the eggs into the pan, and cover them with the sauce, being careful not to rupture the yolks. Cover the pan, reduce heat to very low, and let the eggs poach for three minutes or to desired doneness.

As I assumed his measurement for the macaroni was for already cooked and as I was making it for two I adjusted macaroni measurement, which proved to be a bit much. Next time I will treat that measurement as a dry one and one cup on the light side will be enough for the two of us. I doubled everything else except for the onion and the chili pod. The onion was a bit large to begin with. The chili pod was mild and I would have been safe with two. Also Manuel had included a fried egg on the side along with the two poached. I didn't try that again thinking too much. 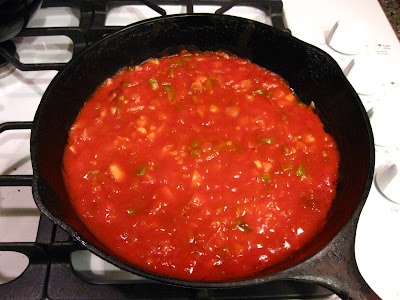 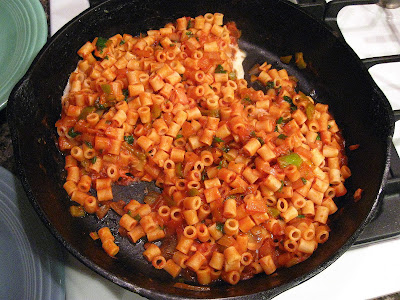 With eggs added and covered.
As I was doing two servings at once, I made a little dividing ridge of macaroni and sauce down the middle of the pan along with a ring around the outside. In the two open spaces I placed the eggs and then gently covered them. This worked out good. Next time I will add another minute to the poaching time as there was a little bit of uncooked whites which grosses out my wife. 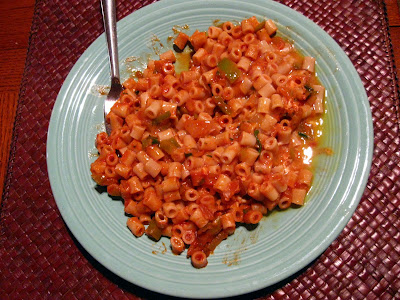