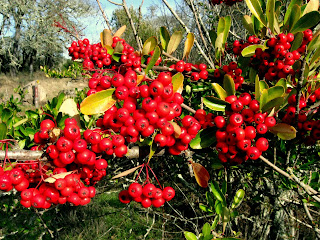 That is the name we knew these by when we were kids. Pyracantha is the real name for this plant, sometimes commonly known as firethorn. But for us kids they were poisonous and you would die if you ate them, at least which is what my mother would tell me. “Don’t eat those things. You’ll get sick and die”, as if she had noted in the past that I had a proclivity to eat things I saw growing on a bush. The only thing I ever ate right from the source was plums and apricots that my grandmothers grew in their backyards, both of which were never that tasty. That is because I usually tried them before they were ripe. Once ripe the birds got to them before I did and I had a problem eating anything with bird beak holes in it. Some kids were under the belief that by merely touching never-wake-up berries, the poison would seep through the pores of your skin and you would die a gut wrenching death before you could get home and wash your hands. Imagine the mothers they had. Me, I was always one to question what was told to me. I reasoned if these berries were so deadly, how come there were so many of the plants in the neighborhood? Most every house had at least one. Once I cut a berry open with my pocket knife. Inside it was yellow and mealy looking. I touched it to my tongue and tasted nothing but bland. Why would I even consider eating anything that was not sugary sweet? What was my mother thinking anyway? Considering my inclination to always put to test what I was told, it’s a good thing no one told me about Oleander or that no Hemlock trees grew in our neighborhood. 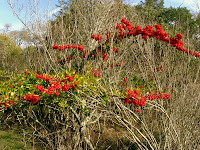 Well the point of all this is that this one particular bush along my usual hiking trail is so brilliant (although my picture does not show it as such) it stands out from across the lake like the burning bush God spoke to Moses from. No wonder some call it firethorn. I felt it was worthy of a post on the blog but hadn’t counted on it stirring up childhood memories in doing so. Its a good thing you never knew all the things I did while in your care Mom. That that did not kill me, made me stronger and I am better for it today.
Posted by John @ Beans and I on the Loose at 8:02 AM