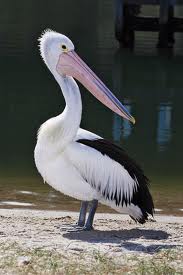 Last night I was reading a short piece. Two women, long distance swimmers, were on a training swim in the open ocean off the California coast. They planned to swim from the Malibu pier to the Santa Monica pier, a distance of 15 miles (I can’t imagine). Midway through the swim they noticed a pelican acting oddly. As they got nearer to the bird he began paddling towards them. When the three met they could see the pelican was tangled in fish line. The women tried to climb out on some nearby rocks but the swell was too great and the rocks were covered with sharp barnacles. Wanting to help the bird they had no choice but to swim for shore. The pelican following them. By now I am thinking that this sounds all too familiar. I had read this before someplace else? As I read on it came to me – I had my own pelican encounter long ago. 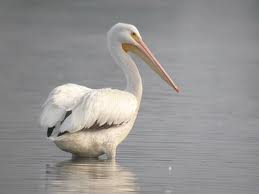 We were camped at a large lake inland from Santa Barbara. I went exploring along the upper banks surrounding the lake. Around the first point I noticed a pelican acting strangely down below near a submerged dead tree. I clambered down the slope noticing the bird never moved away although he was aware of me. I figured he must be tangled in fish line. Reaching the muddy shoreline I took three steps in and sunk down to my knees in the gooey muck. Pulling my foot out my flip-flop remained buried. I reached into the slop up to my shoulder and pulled the shoe out. Myself now coated with black smelly mud I tossed both shoes back up onto dry land. With thoughts of buried broken bottles and quicksand I carefully pressed on, barefoot, and hoped for the best. As I neared the water the ground grew firmer beneath my feet. I waded in and washed the nasty stuff from my arm. By the time I reached the snag, the water was up to my chest and I really did not want to venture out any further. The pelican was still ten feet away and doing his best staying as far from me as he could. I reached beneath the water and was able to locate the fish line. Slowly I reeled in the bird. Once he was within reach he lounged at me and nipped my face with his beak. This won’t do and I gave him some slack so I could re-think the situation. I slowly pulled him in again, then held one arm up high out of the water to divert his attention. He struck out for it, I grabbed his beak and he then settled down.

The two women had a cooperating bird. They also got some help from a resident who brought pliers so as to cut the line and in no time their bird was free. They carried him to the water’s edge and set him down. He lifted his wings as to test them then lifted off the beach and flew out over the water. My bird was not working with me on this and I wished desperately to have had a knife with me. What took the women a matter of minutes of careful untangling with many helping hands (and a cooperating bird); I worked at it for over twenty minutes with one hand, slowly sinking in mud with the water now up to my arm pits. The most difficult area was at his left shoulder where the fishing line cut tightly into joint. The bloody wound did not look too serious but then it didn’t smell too fresh either. I tried to bite the line with my teeth but could not. I figured he could have been in this predicament for a couple of days by the odor. Whereas the ladies’ pelican had a gash on its leg they figured the salt water would help heal it. My bird may not be as fortunate in the fresh lake water. Finally I was able to work this last bit of line loose, released my grip on his beak and sent him on his way. He paddled off never looking back. I got myself out of the lake by a longer but less messy route. As I walked back along the way I had come I could watch my pelican work his way across the lake, rejoin his friends and soon lost track of him in the crowd.
The two women continued on with their swim. Later as they neared the Santa Monica pier a pelican splashed into the water nearby and paddled over to them. They could see by the gash on its leg, that it was the same pelican. He paddled alongside them to the pier then lifted off the water to join a flock of pelicans flying north. It was his way of thanking them. 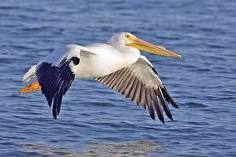 I know my pelican was grateful. He just didn't know how to express it.
(note: none of the above pictures are of my own so don't give me undue credit for them.)
Posted by John @ Beans and I on the Loose at 2:48 PM