(This is not my bicycle nor my garage. Just another part of the visit with my friend.) 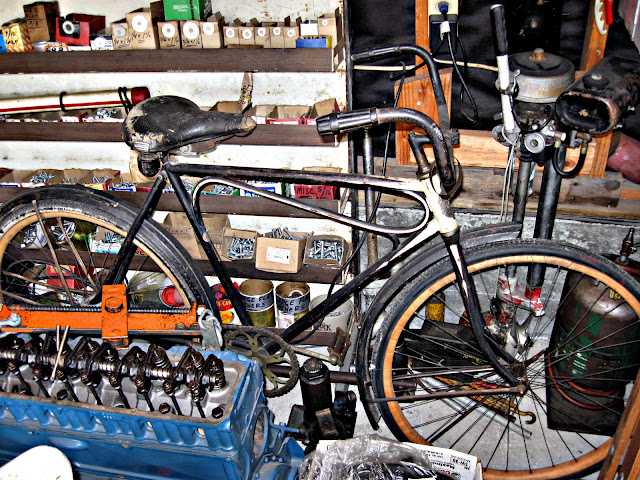 So you may wonder just how old this bicycle is. The rims are made of wood, that is how old it is. He didn't know much about the bicycle. The nameplate badge on the headpiece was not correct for the bicycle. I did some research and found out it is a Crown bicycle. The company was in LaPorte, Indiana, and this model dates to the late teens or early 20's.  I think the seat is a later type from the 1940's. Notice the metal tab on the side edge of the seat. This was to protect the seat when it was leaned against a wall or lying on the ground. Back in this time period, to purchase a bicycle cost comparably to one purchasing a motorcycle today. I thought the frame design alone was so elegant.

Also notice the boat motor in the upper right corner of the photo. It is of the Seagull brand. He had about four or five of these motors, only this one was mounted for display. The others were lying down near the boat motors on the previous post and he plans to mount them on the wall next to them. All of them were similar, just bare bones functionality of a motor for a boat. All of his motors dated back to the 1930's. He had a small cardboard box filled with spare parts for these motors. The box was labeled 'Seagull Shit'. Seemed appropriate. Seagull discontinued production in 1996.
Posted by John @ Beans and I on the Loose at 7:27 AM