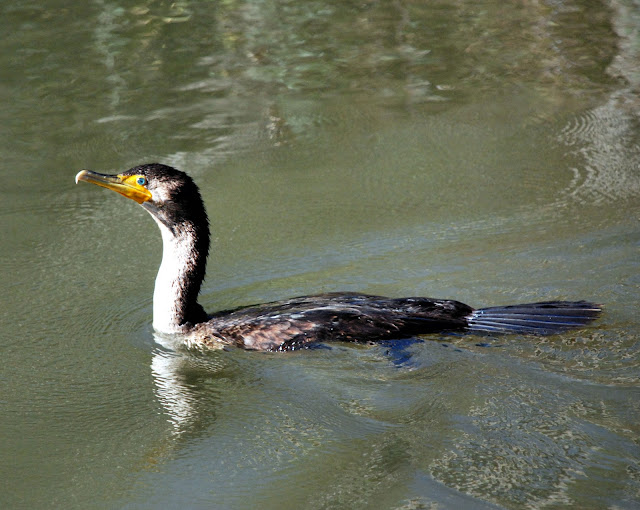 I was watching this guy for some time diving under the water then wondering where he would surface. Each time it was far from where I expected. This one time though, he was successful in catching a fish. He came up right in front of me and gulped the fish down. I wasn't ready and only pushed the shutter release after the big gulp. So imagine, there is a small fish in that neck right now.
Back to the 1500's...
The floor of most homes were of dirt. Only the wealthy had something other than dirt, hence the saying "dirt poor".
The wealthy had slate floors that would get slippery in the winter so they spread thresh on the floor to help keep their footing. As the winter wore on they kept adding more thresh until when you opened the door it would all start slipping outside. A piece of wood was placed in the entryway, hence a "threshold".
They cooked in the kitchen with a big kettle that always hung over the fire. They mostly ate vegetables and did not get much meat. They would eat the stew for dinner leaving the leftovers in the pot to get cold overnight then start over the next day. Sometimes the stew had food in it that had been in there for quite awhile, hence the rhyme "peas porridge hot, peas porridge cold, peas porridge in the pot nine days old".
Sometimes they could obtain pork which made them feel quite special. When visitors came over, they would hang up their bacon to show off. It was a sign of wealth that the man "could bring home the bacon". They would cut off a little to share with guests and would all sit around and "chew the fat".