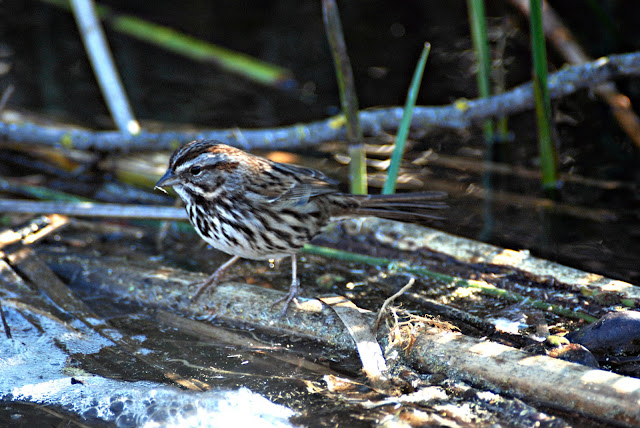 I feel sparrows are the under appreciated of the bird world. Seems you never see pictures of a sparrow.
This little fellow was flitting around the water picking out little crawlies to eat. I got his photo only because the weather turned back into January weather, the wind was blowing, the air was cold, I wimped out on my planned hike and ended up sitting on a bench in the sun by the county park lake for an hour.
I was tossing out some papers when I came across one I have had for a long time and forgot about. I like this sort of stuff. Maybe you might also.


Facts about the 1500's
Most people got married in June because they took their yearly bath in May and were still smelling fairly good by June. However, they were starting to smell, so brides carried a bouquet of flowers to hide the body odor.
Baths consisted of a big tub filled with hot water. The man of the house had the privilege of the nice clean water, then the other men and sons, then the women and finally the children. Last of all the babies. By then the water was so dirty you could actually lose someone in it, hence the saying "Don't throw the baby out in the bath water".
Houses had thatched roofs (thick straw), piled high with no wood underneath. It was the only place for animals to get warm, so all the pets (and bugs) lived in the roof. When it rained the straw became slippery and sometimes the animals would slip and fall off the roof, hence the saying "It's raining cats and dogs".
There was nothing to stop things from falling into the house. This posed a real problem in the bedroom where bugs and other droppings could really mess up your nice clean bed. So a bed with big posts and a sheet hung over the top afforded some protection. That is how canopy beds came into existence.