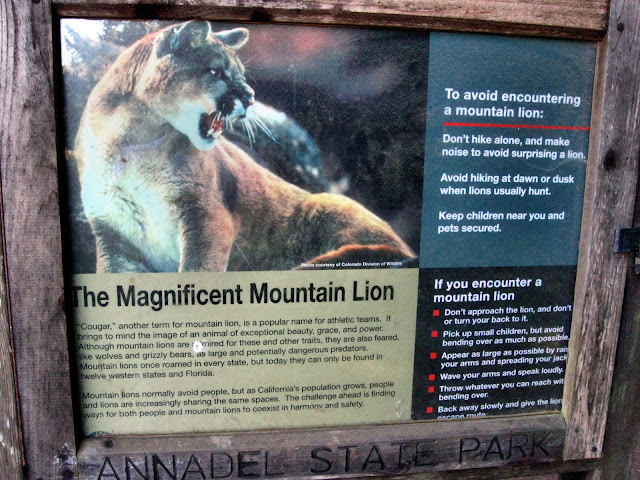 Yesterday I was jogging along a trail in my personal playground (Annadel) when I came up behind a woman hiking. Plodding along as I was, I thought she would hear me but it wasn't till I got close to her did she suddenly turn around. I apologized for startling her and she said it was okay. "As long as you weren't a mountain lion". I went on for a few steps further then stopped to ask if she knew if there were in fact some here in the park. "I see these signs at each trailhead leading into the park and always wondered." She went on to tell me that just last week she was talking to a Park Ranger.
"He told me there is one known to be in the North Burma trail area (which was where we were at the moment). I've seen the scat myself." She went on the describe it to me after I mentioned the scat I had seen. This lady knew her scat. "No it is much larger than that. More like a really really big dog." So I figure like Sinbad's poop but on a much larger scale. "The Ranger also said a lioness with two cubs were recently spotted over on the east side of the park."
So that is really cool to know that they are here. I doubt I will ever see one. They lay low during the day and really do not want anything to do with us humans. The park has a healthy deer population plus an over abundance of turkey, so they are not deprived of a food source. To be honest, I am more concerned about an encounter with a deer while riding my mountain bike. Already I have had a couple close calls with them darting across in front of me while zipping along at speed. You know what kind of damage a deer can do to a car. The worst encounter so far was a buck with a three point rack just a few feet from me as I rounded a turn. There was no stopping and all I could do was hope he'd stay put. He did.
I would be thrilled with a bobcat sighting. A photo of one, I cannot imagine. Anyway, that might happen long before I ever see a mountain lion. I just want to see it before it sees me, that's all.