I had read about the mystery lights of Marfa Texas long ago. It instantly became one of those places I had to see and a main reason for taking this route into Texas. I was amazed when we rolled through the little town of Marfa that no promoting of the famous lights was present. No billboards, visitor center, nothing. I drove on wondering why that town didn't capitalize on the only thing that would draw tourists to it. Why, I didn't even know where to stop and look for the lights. Then about 10 miles out of town I saw this, and pulled in. 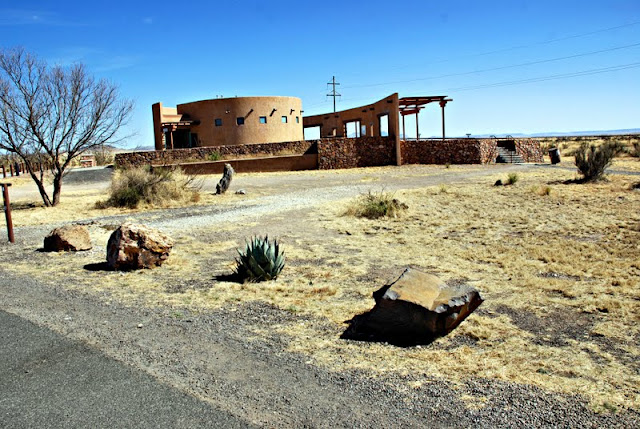 It is a viewing platform center for the lights. Now we're talking. The land and funds for the center were from private donations, none of which from the town of Marfa. The center consisted of two very nice, clean and spacious restrooms, a bronze plaque and telescopes that didn't require quarters to use (a rare item these days) and nothing else. 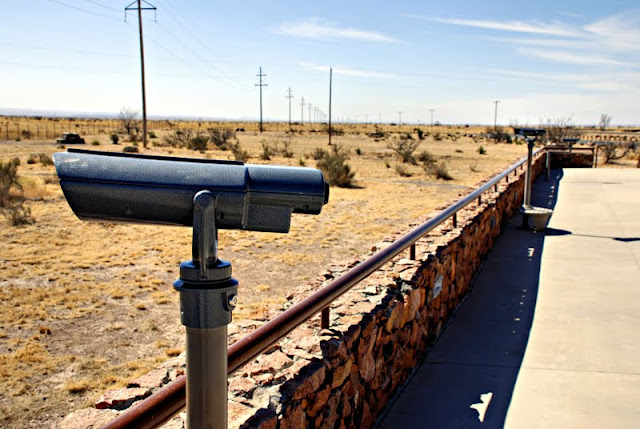 No one else was around. It was early in the afternoon. What to do? To hang around half a day waiting for nighttime, then seeing nothing or if I did see something..."That's it?" Well I decided to move on. I came. I saw Marfa. I was content. Yet during the following week I couldn't get Marfa out of my mind. I had to be there at night and at least give it a shot.

So a week later on the way back I timed it to arrive at the viewing station just when it got dark. I was blown away. Not by any lights, but the sheer numbers of cars, RV's and the hoard of people. It was as if a huge festival was taking place. I got about the last space available in the 100 yard stretch parking area. The air was full of excitement with people milling around, eating, drinking, talking about the lights, their thoughts, theories, past experiences. Up on the viewing platform it was like a tourist lookout over the Grand Canyon. The only thing missing was someone selling t-shirts. And I thought I would be here all by myself. Silly me.

People were carrying on. "Is that it? I think I see something moving. There, those red lights." "I see some white lights over this way." Good grief people, they're cars. Also off in the far distance lights could be seen flickering from ranch houses. People were constanly making something out of nothing.

I was listening to a young man though who was talking about the last time he was here with his family. They did see some lights. "They were yellowish white and would move along the horizon real slow, then speed up, back up, flicker and be gone. Then you would have to wait 15 minutes or so and they would reappear." A car would not be able to do that. He said that the best time to have any luck in seeing them was between 2 and 4 in the morning. I went to bed.

Needless to say, I saw nothing but then I really didn't expect to either. It is not like you just drive up, see the lights, then move on. You have to put in the time, make several trips and catch it when conditions are just right. But is there anything to it? Well the fact that the lights were noticed long before cars and the electric light bulb, there must be something going on out there. 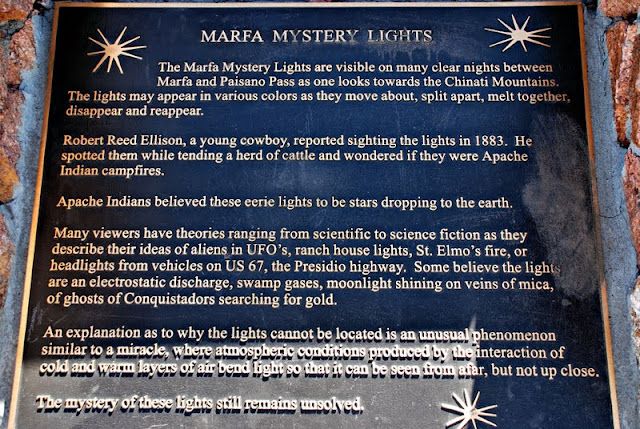 This gentleman had this trash can size telescope set up viewing the moon. I swear I could see the moon rover parked in that crater. What a view! 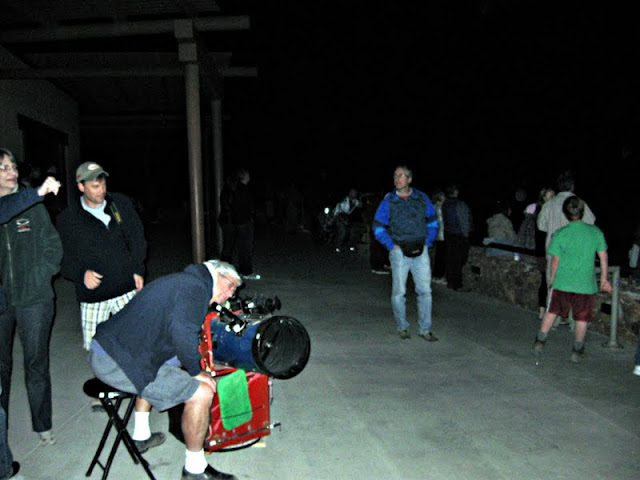 The next morning I got up and the place had cleared out except for one RV. If for nothing else, I had found a great place to camp over night. But Sinbad didn't care for it and had a rough night. Trains roared by throughout the night on the tracks across the highway. They shook the ground and made enough noise to disturb him each time in thinking...well, who knows what a cat thinks.

You can read more about the Mystery Lights of Marfa at http://en.wikipedia.org/wiki/Marfa_lights
Posted by John @ Beans and I on the Loose at 7:25 AM