I was catching up on blogs last night when I read on Andrew's Rambles With a Camera about the night having a quarter moon, which last happened in 1935 and will not happen again until 2088. Well, being not so sure where I'll be 76 years from now I thought best to step outside for a looksee. Sure enough, just like Andrew said, there it was. I went back in and got the Kodak to preserve the moment in case I forget when 2088 rolls around. You should click on and read Andrew's post. It's touching. Thanks for showing it to me too Andrew. 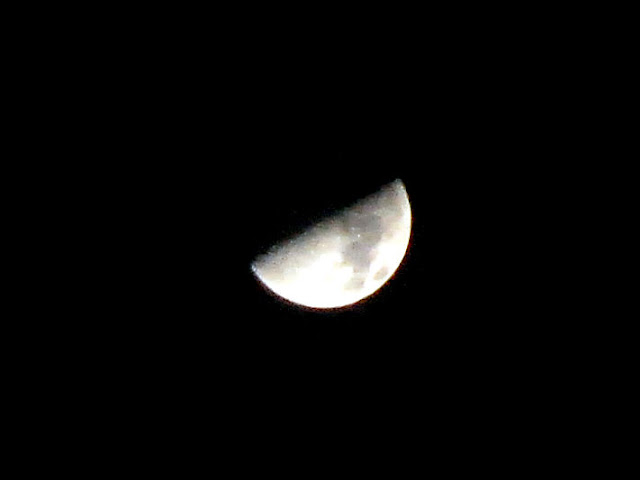 I may get asked as to how I got this photo so, first off, I was too lazy to go get my 70-300mm lens. I used the 18-135mm that was on the camera at the time, zoomed out to 135mm. I used my tripod. The ISO was still set at 800 from this morning's nighttime outing. I took several shots underexposing more after each shot. This one, the final shot, was done so at f 5.6, at 1/25th sec., underexposed 5 stops. With my photo program I clarified and unmasked sharpened it, then went to the histogram levels and used a preset contrast adjustment. Finally I cropped it twice at the 3 x 4" setting. I attempted a noise reduction but that eliminated the features of the moon's surface so I undid that. This was a quick and dirty way to get a picture of the moon.
Posted by John @ Beans and I on the Loose at 1:33 AM