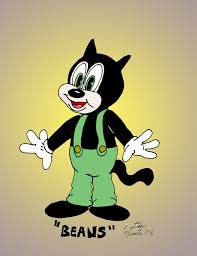 Beans the Cat was the third cartoon character introduced in the Warner Bros. Looney Tunes series in 1935.  Unfortunately for Beans he was created at the same time as was Porky the Pig.  Theater goers were more taken by the stuttering porker and in 1936 poor Beans was eventually dropped.


More recently in 2011 Paramount pictures released a film called Rango which won an Oscar as the best animated feature film of the year.  One of the main characters was Beans "La Vaca" Sanchez an intelligent, tough, and quick-witted female desert iguana.  She was just Beans in the movie. 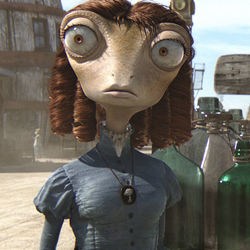 That name stuck with me but I never thought of using it for any reason as Sinbad was still with me. Jump ahead a few years and I found myself adopting new cat.  Her name was Rainbow Dash. That had to go! The memory of Beans from the movie came up from nowhere in my mind and that's the story as how my Beans got her name.  Rainbow Dash?  Good grief!!!


Sleeping update:  Beans sleeps in bed with me now, right smack dab in the middle!
"I'll take this spot.  You can have the all the rest of the bed.  I don't see a problem with that, do you?"