I had seen on a couple of my friend's YouTube videos their being at Padre Island and camping right on the beach.  Although they commented in their videos about it being windy and chilly I thought I'd be brave and go there.  A few years back when Sinbad and I passed through Corpus Christi, Texas we stayed at Mustang Island just to the north of Padre Island.  Padre Island is a 70 mile long narrow barrier island, the world's largest undeveloped barrier island, just offshore from the Texas mainland.

When we arrived I went to the North Beach on the advice of the park ranger.  I drove down the dune, off the pavement, onto the sand and was astounded to find the water right there!  There was barely enough room between the dune and the ebb tide to drive.  I could see people scurrying to move their gear up from the encroaching water.  I talked with the first campers I came to.  They said it was high tide (really another hour to go before high tide) and with the recent storm plus it being a full moon, yes the water was up further than normal.  Well I wasn't up to this type of adventure and backed on out of there.  We'll try South Beach, Beans.

South Beach was no better.  In fact what little sand that was left to drive on was wet and the water would be lapping at the tires.  Good grief!  Even if I did press on after the tide receded, it'd only be back up 12 hours later like at 4 o'clock in the morning.  Oh yeah, I want to experience that!  A guy I talked to while he was gathering up his camp from the water said to try Bird Island Basin, and so there we went.  It was on the other side of the barrier island facing the calm Laguna Madre waters away from the tidal surge on the Gulf of Mexico.  Here is our camp.  Looks idyllic doesn't it?  Truth of the matter is each one of those green bump posts lying on the sand is a numbered camp site. 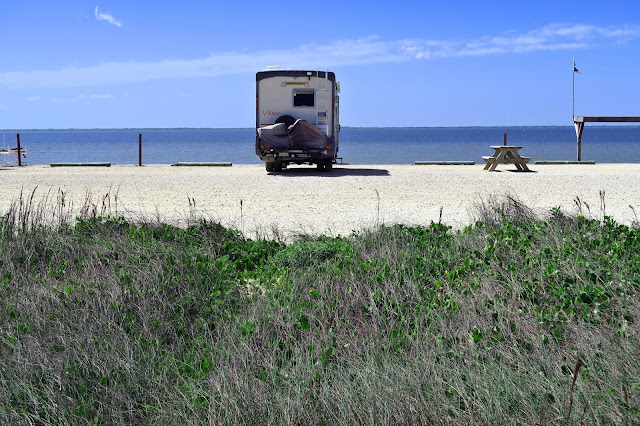 The reality of camping at Bird Island Basin.
Door handle to door handle camping.  Yep, you could hear your neighbor snore. 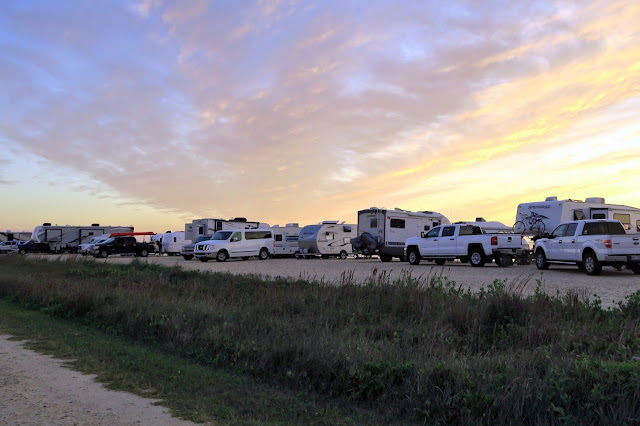 We lucked out.  No one moved in to our left.  To our right were folks from Quebec, Canada.  While relaxing reading my book the four Canadians socialized speaking French.  I discovered that I can read while people nearby are talking when it is in a foreign language.  You don't understand what is being said so you don't end up focusing on the conversation.  That's nice.  I'll look for travelers from Quebec to camp next to from now on when in tight quarters.  In fact, most of the Canadians I have seen on the road once entering Texas have been from Quebec. 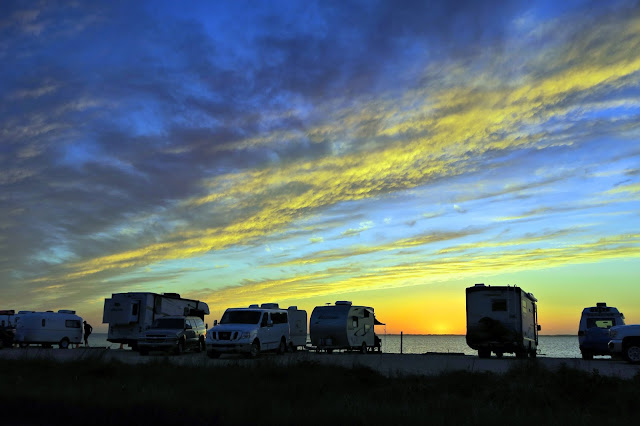 The Texas mainland is barely visible on the horizon.
The lagoon is extremely salty, one of only six hypersaline lagoons in the world. 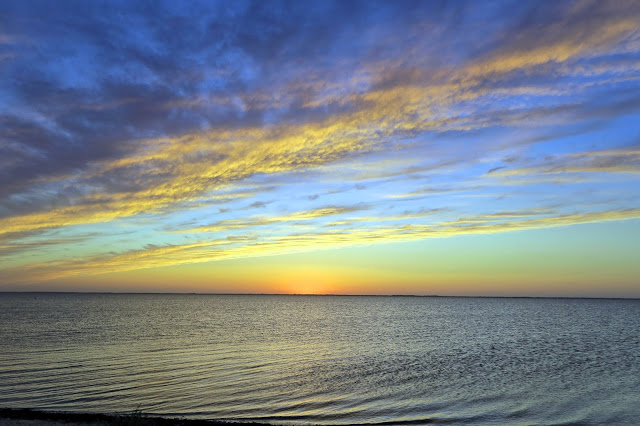 The next morning (this photo is evening, not morning) everything was damp and sticky like being along the coast always is.  I didn't try the beaches again what with the the constant wind, nippy cold  and questionable high tides so we moved on back inland.  Another video got posted the next day and she was dealing with fog.  She couldn't see more than 50 feet away and was concerned about someone driving into her.  Sounded lovely. 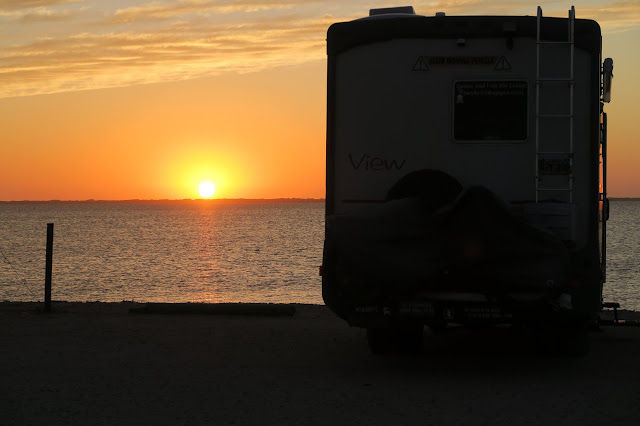