Our situation became desperate. We were down to the last can of cat food!  So we had to say good-bye to the Grand Canyon and do some shopping.  We went north to Page, Arizona where the Glen Canyon Dam is that forms huge Lake Powell.  We stayed at the Walmart on the outskirts of town.  There were at least twenty other RV's that stayed that night.  That is probably the most I have ever seen at a Walmart parking lot.  The next morning I went back into the store to fill water jugs at the water machine.  When I returned to the motor home two women were standing outside. One said "Here he comes."  The other lady walked over to me holding this adorable tuxedo kitten.  I soon learned that she had found it wandering around in the parking lot and both women knew I had a cat and thought it was Beans who had got out.  This is something I had hoped to have happened to me that first trip road trip after Sinbad passed away - find a cat somewhere on the road as if it was meant to be.  But as you know, that didn't happen.  This kitty was about a year old and the woman said it was a female.  She couldn't keep it as she was visiting from Australia.  The other lady could take it for she was already traveling with two cats.  You can imagine how hard it was for me to not take it.  The Australian lady in the photo said she would take it to the shelter in town.  I hope someone adopts "Page" (see, I've already given her a name) and gives her a good home. 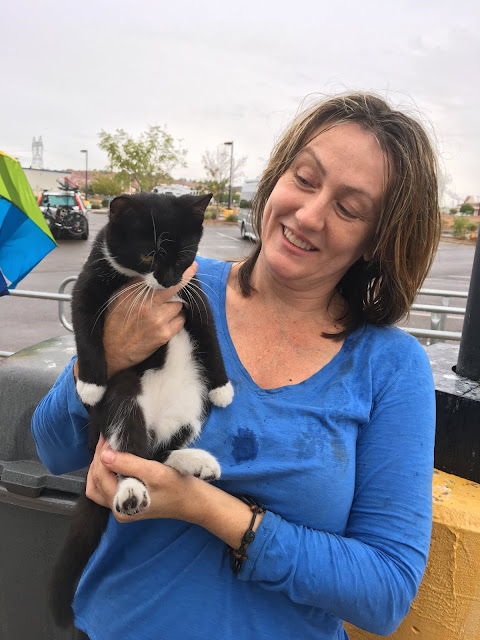