One day I went to visit the "flea market" on the main drag through town.  Not your typical flea market for some of these sellers have been here for as long as I can remember, live on their space all year round (and they look it) and have so much JUNK its not possible to move.  But for the most part the remaining sellers are only here for the tourist season (4 to 6 months).  I got to talking to this lady (blue top big straw hat) for I overheard her telling a couple ladies that she had only been on the road for a year now.  She was cute, very nice and would be turning 70 next month she said.  She had been trying to find places to stay for free yet still be able to set up and sell her stuff which for the most part were nick-nacks, some jewelry and whatever. I didn't look that closely.  A lady stopped by to look and picked up a bowl.  In mid-conversion with me she said "That bowl is ten dollars".  She said she pays $230 a month for the spot she's in.  Other sellers I saw had hook-ups (water, electricity and sewer dump) and I hope she did for that price.  Her truck was in need of some repair work.  Transmission I think she said.  She had two dogs but were unable to keep them outside.  They would become aggressive if another dog came by which would run off potential customers. That white box is her trailer.  I felt so bad for her that I didn't ask about the trailer.  Its embarrassing.  I'm paying $180 for seven months.  True, I don't have hook-ups and she couldn't set up her store on BLM land.  But I couldn't help but think of the money she could save.  No way can she be selling enough to make even a dent in her $230 a month fee.  She must have additional income some way.  Has to.  I wished her well and had to walk away before I started giving her unsolicited advice on how to live cheaply. 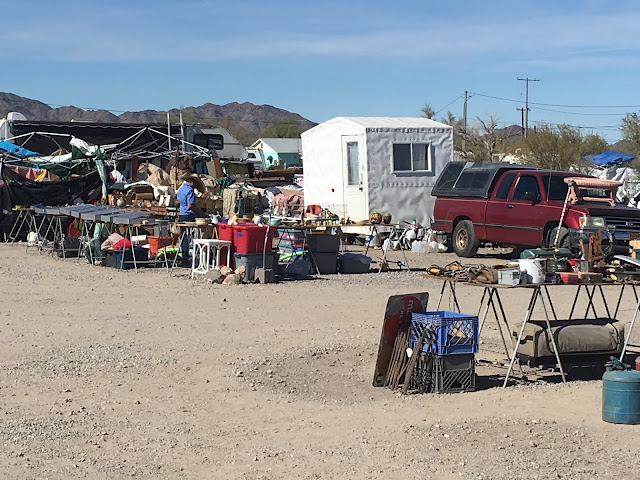 Another seller, one of those lifers on site, had these gas pumps among some other "antique" items.
The red gas pump had a tag on it $1500.  The white one in the back $1000.
The price tags were so faded I could barely make them out. How many years of exposure to the sun?
And wouldn't you know I left camp without my check book. 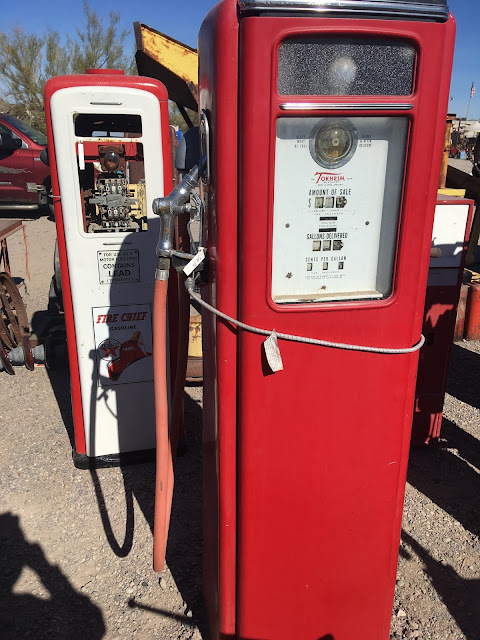