This post was created a couple weeks ago and had to be updated several times
I came back from my morning walk one day and saw this parked out by the road that separates us from our neighbor across the way.  This is his main truck that he used to get here in when he arrived late last year.  Look in the background and you can see a van with windows.  That showed up a few days earlier.  That is the second van he has had, having sold the other in a previous post.  Well I guess he plans to tow his main trailer with the new van now. 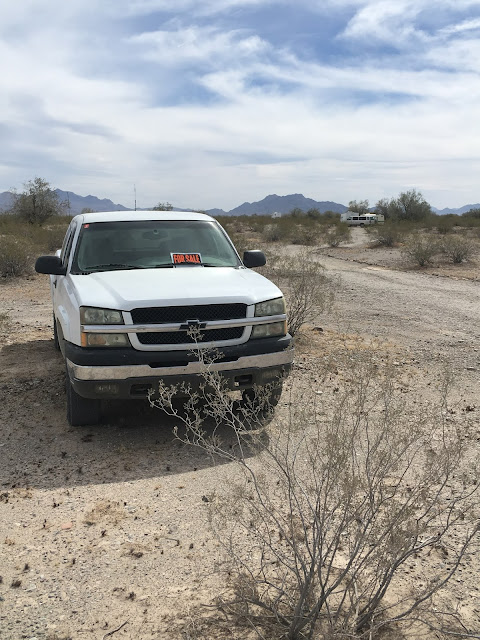 Well, this all lasted one day.
He must have changed his mind as he started using his truck again.
Nope.  Still not asking.  I’m staying clear of him.
Update - a few days later.   The van gone.
Update - a couple more days has passed.  The van is back.
Update - a few more have days passed.  I see him pull out in the van.  I look beyond to his camp.  The truck is now gone and so is his main trailer he was living in!  When did that happen?
Update - after a few more days I am certain he has moved into trailer number two.  The smaller trailer number three is still there.  The truck and his original trailer he arrived in are history.
I still refuse to go over there.
My friend who is camped with me said maybe one day she’ll get drunk, go over there
and chat him up and see what he is doing just for me.  Now that is a sign of a true friend.
As the saying goes “A friend will help you move, but a really great friend will help you move a body.”
Posted by John @ Beans and I on the Loose at 12:00 AM