Martin and the Swiss Miss 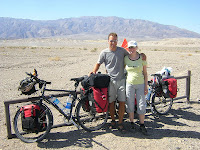 We left camp at Texas Spring above the Furnace Creek complex this morning and continued our leisurely pace to the north end of the Death Valley. The first point of interest was the Salt Creek turn-off. I hesitated at first since I’ve seen it several times but turned anyway just to kill some time and see how the desert pupfish were doing. Two bicyclists were parked at the beginning of the dirt road and the guy asked me if they could get a ride in. They were not too keen having autos kick up a lot of dirt on them as they whizzed by on the mile and half long washboard track. I said sure, get in and Sinbad ducked under the covers in back.
They were Martin and Franziska (Fran-chess-ka) from Switzerland. Both spoke English well enough but conversed back and forth in German as we drove in and walked the boardwalk. Martin earlier said if I wanted to hurry along that they could find a ride out with someone else, but I assured him I had nowhere to go and all day to get there.
They had flown in to Los Angeles and hired a taxi to take them out of the city. I thought that quite smart and now wish I had asked where the taxi dropped them off at. Their goal is to hit as many National Parks as they can in 5 ½ months on a route that loops down south then north up to the Yukon. I asked why the Yukon but I think pretty much was because it is there. Franziska was looking forward to seeing Las Vegas after Death Valley. That will be an overwhelming experience for her. From there they will go down to Zion, Bryce Canyon, Yellowstone, Glacier/Jasper and I’m sure others she didn’t mention, including the Grand Canyon no doubt. They average around 50 miles a day. Martin who was 32 (Franziska a few years younger) had been to the states before with friends in a rented RV, but it was Franziska’s first time.
I asked about preparation for this along with how Europeans are able to get so much time off to travel as they do, whereas Americans can’t seem to get it together. In their case they quit their jobs for this trip. Martin explained that Europeans for the most part work and save for things like this. They, especially the Swiss, Germans and Dutch, save their money to care for family, to be prepared for any unexpected financial needs and to travel. “Europeans love to travel and see the world. I think Americans spend all their money as soon as they get it and don’t plan.” He nailed that pretty well I thought.
They planned for a year for this trip. Most of the information they needed to know as to expenses, best places to go and stay and the best way to go about accomplishing thier goal was available from books and guides (and the Internet of course) written by other Europeans who had bicycled in the U.S. Other than the flight over here and shipping of their bicycles and gear, the only expenses they really face are camp fees and food which Franziska was quick to add “ lots of pasta, bananas and water”. I offered them some sodas at the end but they declined.
As we walked the boardwalk they both had camera bags with them but only Martin pulled his out. I asked if he would like me to take a photo of them together with his camera and he said okay while gingerly handing over his expensive Canon with a large zoom lens to me. Damn, that thing weighed over twice as much as my SLR and I wondered about him lugging this thing around on a bicycle. I took one shot and then went to take another at a different angle when he quickly stopped me. “It’s not a digital! It has film in it and I don’t have that many shots available.” Well, I could appreciate someone wanting to shoot slides but on a trip like this, riding a bicycle, that seemed hardly appropriate. With the small 10-mega pixel cameras the size of a pack of cigarettes they make now, he could take thousands of pictures of equal quality which would leave lots of r 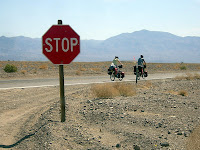 oom for more pasta and bananas.
They were a very nice and friendly couple. With more time I could have found out more, like what Franziska’s early impressions of America was, and what their thoughts of Americans in general were, but I didn't want to grill them too hard. I bid them a safe trip and sent them on their way south while we continued on to Mesquite Campground near Scotty’s castle and Sinbad crawled out from beneath the covers.
Posted by John @ Beans and I on the Loose at 11:30 AM

Do you wish you could of joined them?

Hey John,
Looks like fun and the flowers in the desert have to be just spectacular. You do know that the flower that was not in your cactus flower book was a lupine, right? They are all over the place here.
We are looking forward to some pictures and adventure stories when you return.
XOXO
C&W

Yep, those are definite Lupine flowers.