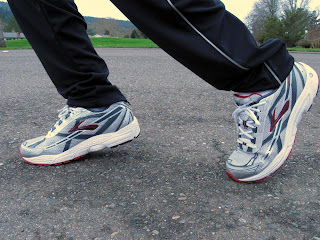 For my 30th birthday I gave myself the present of getting into shape. I was the heaviest in my life and most any effort would put me into oxygen debt. The jogging craze was just beginning and I got onboard. Each evening after work I would go over to the high school track and stumble around. Over time I improved being able to not only actually run, but do so for some distance. After about 6 months I entered a foot race and was hooked from then on. For the next ten years I raced most every weekend. I got faster and faster, set personal records for myself and usually placed in my age group. But those ten years took their toll on my knees. My last race was a half marathon (my favorite distance) in San Francisco just before my 40th birthday. I quit running hoping to heal up but was never able to run again and knew I never would again.
When I retired I began walking a couple miles at a time a few days a week, but never got out of it what I did running 6 to 10 miles a day. After we moved, our new neighborhood proved to be much more enjoyable to walk in. I began walking with more enthusiasm and dedication. Soon followed hikes in Annadel at longer distances. I was slowly getting more into shape and my knees held up by using supports. The thought began to germinate in my little mind “Maybe I could at least jog some.” For my 61st birthday present to myself, I had my orthotics reconditioned, bought some new running shoes and penciled out a training plan for myself with the most important part being to not over-do it. Taking it slow and easy, even more so than when I first began 31 years ago, has been the hardest part for me to do.

Now here I am three months into this and at a point I would never had dreamed was possible for me again. I can jog for 3 miles with relative ease and the knees are doing well. My pace is a couple minutes a mile slower than my normal training pace was long ago but I can live with that. In fact I am better off this way and will not attempt to increase it any. I’d only be asking for trouble. Once believing of running a race was out of the question, I am slowly re-thinking that and making it a dream to strive for. I don’t need to run in the front anymore. It will be just as much fun if not more so, to run with the crowd. I look forward to it and believe I can do it…some day.
Posted by John @ Beans and I on the Loose at 1:47 PM