This is My Office 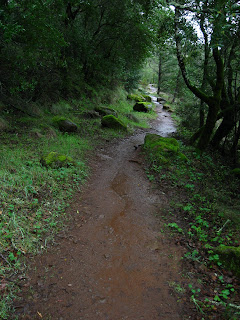 Finally a break in the weather today which I took advantage of. It would be much too sloppy for a mountain bike ride so I elected for a hike in the park. A mile into the trail I was met by a short Mexican fellow wearing a bright yellow raincoat, dark rain pants and rubber boots. His name was Vicente, probably in his 50’s and he worked for the park service. He was returning from Lake Ilsanjo after checking its water level. “We don’t want to let happen what did last year when it got too low. Someone left the valve open.” When I asked about driving the truck I saw parked at the trail head on the fire road to the lake he said “We don’t drive on the road during the rains. Too much damage.” I told him how nice it was to have a job where he can go for a 4 mile hike and get paid for it. He rattled off a long list of parks he had worked at around the Bay Area and in Marin and Sonoma Counties saying he felt Annadel was the best of them all. “I’ll stay here.” I inquired to if he had been affected by the cut-backs by the State. “We took a 14% pay cut, have more work assigned to do and must take furlough days each month.” After awhile we parted ways and I said to him “Well, have a nice day in the office.” He paused, realized what I meant, looked around and said with a smile, “This is my office”. 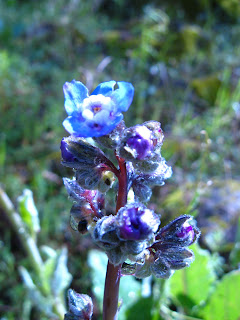 First of the wildflowers.
Posted by John @ Beans and I on the Loose at 2:49 PM