The sleeping bag worked good but I felt it was a bit warmer last night anyway. I got up at 6:30, ate breakfast and went for a scooter ride. The wind was howling and the little Honda worked hard beating into it. The plan was to ride over to the railroad tracks and follow them south towards Gerlach. At the tracks I saw the fencing down in spots and a road on the other side so I went for it. Instantly I was in muck and mire and barely got out without bogging down to a stop.

(insert picture here of deep tire tracks in mud, had I taken one)

Nevertheless I had that awful thick playa paste kicked up and plastered onto the bike. I retreated back over onto the Playa and continued on south kicking away at the clods stuck to various parts of the trail bike. This didn’t last long for soon the Playa itself began to get soft. I figured as much for the southern end is the low end drainage for the Playa. I then crossed over to the other side of the not-so-dry lake to work up the opposite “shoreline”. This was easy going with the wind at my back. I continued on up to the 8 mile entrance which is where the Burning Man circus attendees enter from.

(insert picture here or where nearly 50,000 people come to live for one week each year, had I taken one)

From there I proceeded out onto the Playa to the approximate spot of Black Rock City. No streets were visible and I found very little moop (matter out of place). Time to head back to camp. This was a long hard ten miles straight into the teeth of the wind. The wind sound was deafening and at one point I stopped, switched into low range and motored on in 4th gear barely hitting 20 mph. By the time I got back to camp I had had enough but the little Honda 90 probably could have done even more. I could sense a weather front rolling in and the skies looked gloomy to the west. I loaded the Honda onto the rack, put all the gear away and broke camp. It is difficult to get a good night’s sleep when you are thinking about possible rain. 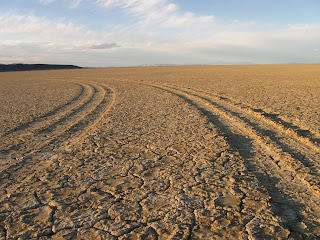 Not the gloomy skies, just tire tracks as I pulled away.
It was nice to just putz along Highway 34 with the wind behind me. No other cars on the road so I was able to go at my own pace. I went as far as Fly Geyser just because it has been years since I was last there. The geyser was spewing away water and steam. Too bad one cannot drive in to it anymore but it has been gated off for over 20 years now. If people would all respect things and places leaving them better than they found them, maybe spots like this would last longer for all to enjoy before being gated off. So now one has to enjoy the geyser from a half a mile away looking through binoculars.

(insert picture here of Fly Geyser far off in the distance on the other side a fence, had I taken one) 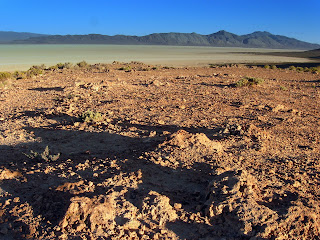 I drove back to Soldier’s Meadows road and made camp on the lookout point about a mile in. This spot provides a nice panoramic view of the Playa down below, where I could watch the winds whip up the alkali dust. I fixed a sandwich (a half!) and decided to go for a little hike up the hills behind me. The little hike evolved into a rock gathering expedition.

(insert picture here of rocky slope, if I had...oh hell, here's a picture of Sinbad instead) 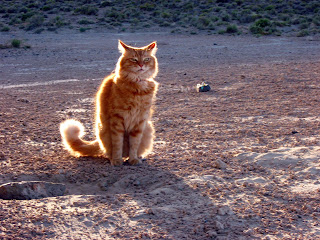 One of the things to do on this trip was bring home more shale to edge the cactus garden with. I know places out here to get it but one cannot get there in a motorhome. This exposed igneous rock would have to do.

I carried a few flat pieces of the dark reddish brown volcanic basalt down and returned with my backpack. Thin pieces like the shale I have at home were hard to find as most were in slabs 2 inches or more in thickness. After some time searching I would load my backpack add a few pieces in my shoulder bag and stagger under the load back down the slope of loose jumbled stone. I climbed up and stumbled back down twice. I figured I had enough (the rocks and packing them down) and quit. I was going to quit anyway, enough or not. Then it was a matter of how to pack all this rock away in the View for the trip home. Of course during all of this I saw a very nice Collared Lizard who posed for the longest time and I had no camera with me! So here's another picture of my little buddy... 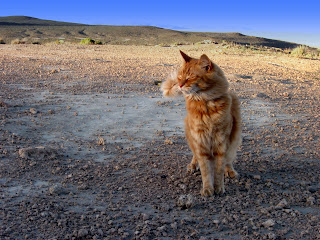 The rest of the afternoon was spent doing very little – no surprise there. I read, gazed down upon the Playa, stayed inside out of the wind, ate a light dinner, read some more and turned out the light at 9.
Posted by John @ Beans and I on the Loose at 8:08 AM