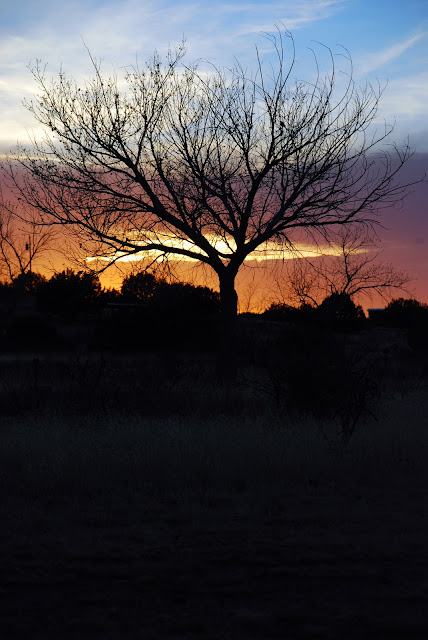 Last night I was sitting inside updating my journal and looked out to see this. I was trying to eliminate buildings and power line poles so I zoomed in a bit and the result was I don't think they would have been visible anyway. But I liked how the shot came out, which happens to be straight out of the camera. The sunsets the past week in Texas haven't been so spectacular as they were in Arizona. You need those clouds I suppose to make them dramatic.
This poor area we've been in for the past week is really hurting for some rain. In Big Bend they said the last rainfall was in July. The Prickly Pear cacti were dry and shriveled up like the skin of an old man. Here in New Mexico I've stayed at State Parks along reservoirs that are extremely low in water. I observed one pond where the Great Blue Heron needed to stand in one spot and repeatedly pick fish out one by one as they were concentrated to a small area. Now I am in Santa Rosa, N.M. and it bares no resemblance to my hometown of Santa Rosa, Ca. Here the vegetation is a dry yellow brown while home everything is green and drenched in a daily rain.
Think we'll stay on the road.

Wow. We so easily equate spring with rains and greenery. I guess some places are in big-time need for those April showers...

Great shot, but hope they will have some rain soon. Nature needs it from time to time.
Drive safe:)
Greetings,
Berit.

What a wonderful sunset. Great work!

Sounds like texas and New Mexico are having a terrible drought.
Beautiful sunset photo.

This is a stunning photo!!! I love sunrises and sunsets. Happy Trails to you...

Great fun following you and your dirty cat on your adventure...

I know what you mean about the drought in NM. it's been going on for some time now. I stay at a place just outside of Abiquiu and it's along the Chama river which is nice, because water is definitely in short supply there. that's one of the factors that makes me hesitant to move there one day - lack of water. I currently live next to a great lake and we have 4 seasons here with plentiful water supplies and I think it would take some getting used to - living w/ little water. especially when it comes to growing food. I do love that desert there though....and the views of Pedernal. what a great sunset photo. makes me long for NM even more.

What a beautiful sunset!