More TTWP (through the windshield photography). Okay, I know, but there are a lot of miles in Texas and I had to do something for entertainment.

I came upon these two cyclists on a training riding with their support vehicle. Fine, Texas is flat so it is easy riding, unless you are beating into a head wind. But why here in the middle of nowhere? Seems a pretty boring area to ride a bicycle. The vehicle had California plates too. 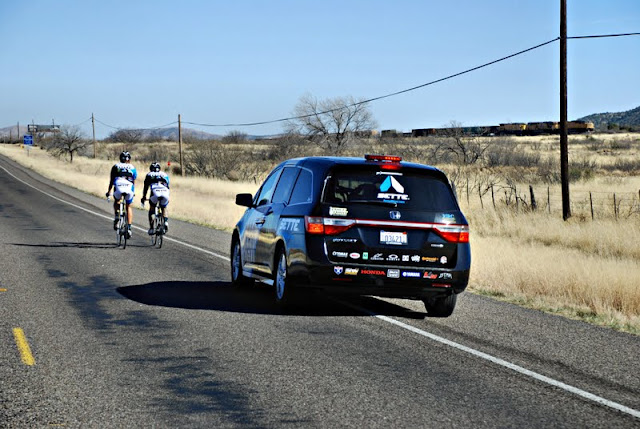 These two had just filled up in Marathon Texas. I ride motorcycles. I cannot imagine doing so with two huge flags flapping around behind me though. I know the guy is trying to make a statement for the stars and stripes, POW's and MIA's and that is all well and good, but gee...maybe he could tone it down a little. 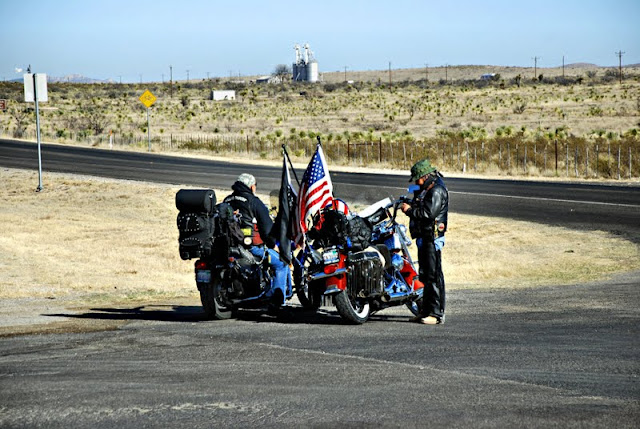 I had passed through beautiful Alpine Texas opting to fill up in Marathon 30 miles further. This way I'd have more fuel with me to tool around in Big Bend with for it is a really big park. My AAA map showed Marathon to be a sizable town (it had 2 red circles marking it on the map, instead of just one circle) so I thought no problem. As the end of 30 miles neared, all I could see in the far distance was a few weathered wind blown buildings - no big town. I began to get nervous. If there were no gas stations there, I had enough fuel to go back to Alpine but surely did not want to do that and waste an hour of valuable time. It turned out to have two stations and only the second one, on the very far edge of town had diesel. Whew! Yeah, I paid a premium price for it too. I thought I had learned my lesson on this experience, but later on in the trip it backfired on me.

Entering Big Bend National Park, I pulled up to the kiosk booth and read the sign as I waited for the car in front of me to clear out. "$20 entry fee for 7 days." Further down I read something about "Senior Pass (62 and older)"
I pulled up and Ranger Cindy greeted me. "Welcome to Big Bend."
I said "You only have to be 62 to get a senior pass? I thought it was 62 and a half."
Cindy said "No just 62. The government wouldn't make it that difficult." Having worked for the Federal Government I beg to differ.
"Well I will have to get one of those" I replied.
"Show me your ID and $10 and I can give you one right now." Really? She went on explaining the benefits of my new Federal Parks Senior Pass as I marveled at it in my hands. I guess I wasn't really paying that much attention. I mean I was a bit rummy having been driving all day long. I was all excited to finally be at Big Bend and now I was getting a Senior Pass? I told Cindy this was about the best birthday gift I've got in a long time and it isn't even my birthday. 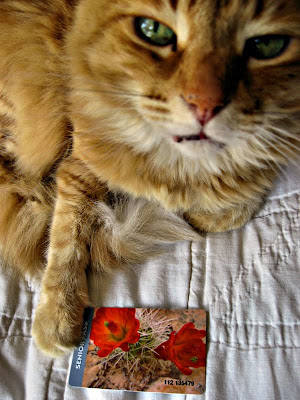 It was weeks later when I was entering Arches National park and I handed my new Senior Pass and a 10 dollar bill to the ranger lady that I learned that the $10 I paid at Big Bend wasn't a discount to get in, but the one time fee for the lifetime pass that gets me into national parks, monuments and more for FREE!  Was I a happy camper? At least I had already been using the card for half off camping fees.

Cindy also suggested a better campground than what I had in mind. She said I should arrive there right at sunset and handed me a paper she made up with sunset pictures she had taken and where to go to take them yourself. So you can well imagine that I was just plain giddy driving along enjoying the beautiful scenery with my new Senior Pass sitting by my side. Right away I noticed a change in the plant life, especially the prickly pear cacti. What I am use to in California has much shorter spines and I've never seen it with this purplish cast to it. 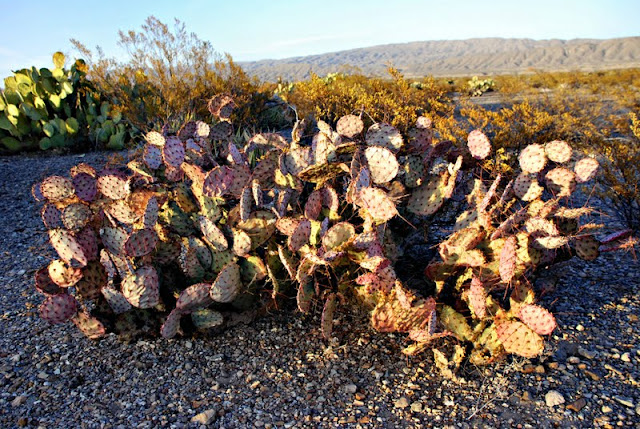 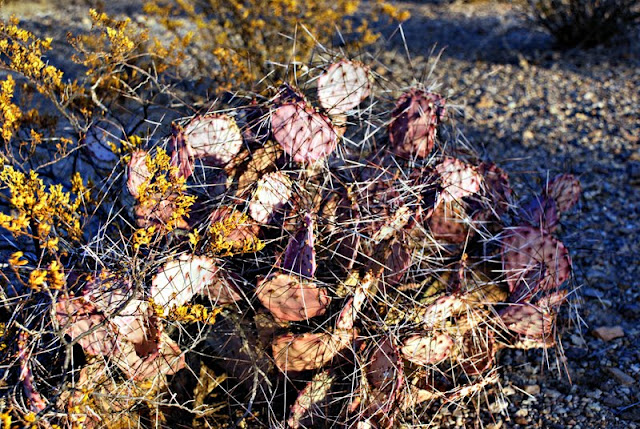 The campground was great. We got a nice spot off by ourselves much to Sinbad's delight. And who should be the first to greet us? 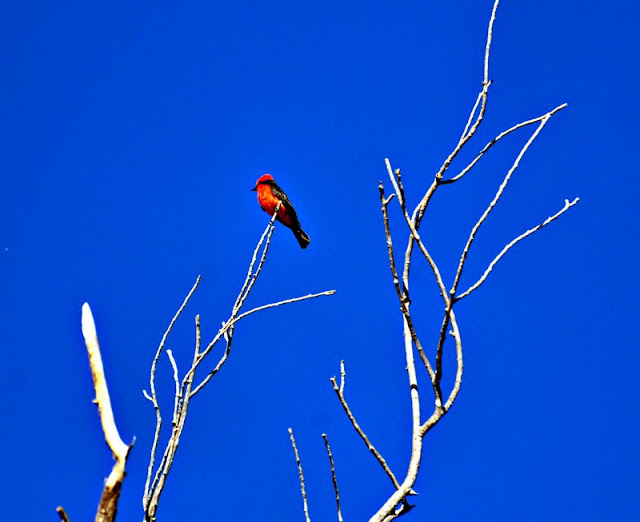