After the cemetery I walked back into town and figured I had pretty much seen it all, a stable, an outhouse and the locked up home. But there was still one more building - the school house. The school house was built in 1920 and was used up into the late 40's. Children attended first through seventh grade there, then attended eight grade in nearby Tombstone. Currently the building is in a preserved condition complete with school desks, chairs, the blackboard, books, creaky old wooden floor and a collection of photos and artifacts from the old days of Fairbank. Part of the classroom is used as a gift shop with a nice selection of books about the old west and pioneers. The volunteer docent was sitting at the school marm's desk and I got to chatting with him for some time. Now notice something missing? There are no pictures of the school house! It wasn't till that evening when I downloaded my pictures into the laptop did I realize I FORGOT TO TAKE PICTURES OF THE INSIDE OF THE SCHOOL! Too much yakking.

I left the school house and discovered still more, the Fairbank Commercial building as it was called. This was at one time their general store, post office (which was in operation from 1883 to the early 70's) and you can see later on it must of had gasoline pumps. The BLM had re-roofed the building and replaced entire walls to preserve the building. But why? 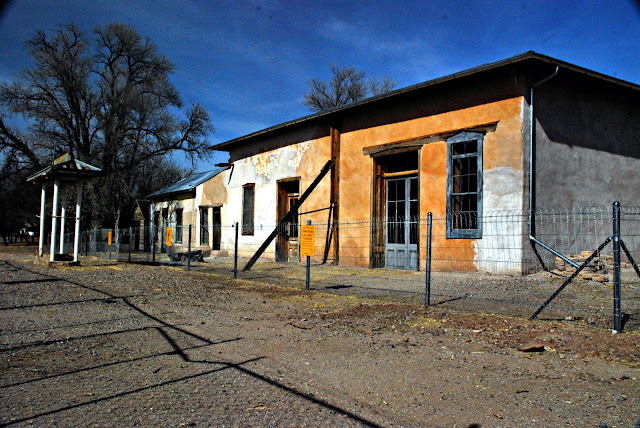 You can see the low fence in the picture but notice the shadow of the much higher fence. I was on the other side of that fence taking this photo through a camera sized hole someone had cut into the chain link at the far end. As if the low fence was not enough, the BLM had pressed the public back yet another 25 feet with an 8 foot high chain link fence. The only thing missing was the uncoiled razor wire along the top. Too bad, for some of those old doors and window casings would have made for nice photos in a building that the BLM had went to great effort and expense to restore only to keep the tourist and photographer far away from.


We moved on to Tombstone where this sunset picture was taken.

Tomorrow, the town of Tombstone.