It was lunchtime with no place to pull over. I saw on my map a little green triangle denoting a rest stop 20 miles further on. I can wait. When the 20 miles were behind me, I missed the rest stop. I was gawking out the driver's side window at the Texas Rangers who had pulled over someone on the opposite side of the road. Out of the corner of my eye I saw the rest stop whizz by. Damn! Well I certainly couldn't do a U-turn or back up a 100 yards with the Rangers there. A few miles further a rest stop appeared on the opposite side of the road and here I whipped a U-turn. I turned off the motor, stepped out and relished the absolute silence and the feeling of being in the middle of nowhere on the vast west Texas plains. 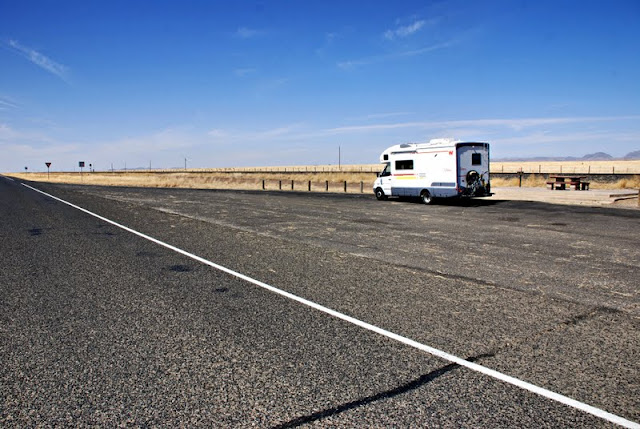 I went back inside and made a sandwich. Just as I stepped out of the Little House on the Highway and was walking to the table, an Amtrak Train roared by. The engineer tooted his horn. I waved my sandwich at him and then stood there. I looked at the passengers in the cars. Most had their heads leaning against the windows, bored after hours of viewing flat Texas prairie rush by with no interruptions. A few people were still conscious, gazing out the window. I wondered what image I presented to them. A sudden glimpse of a motorhome, parked at a cement table, nothing else around, and this man just standing there with a sandwich in one hand and a soda can in the other. "He is having his lunch. Maybe he's going to El Paso like we are. Well, we'll be there long before he will."

Not really. I'm going the other way. I just missed my stop a few miles back, that's all. 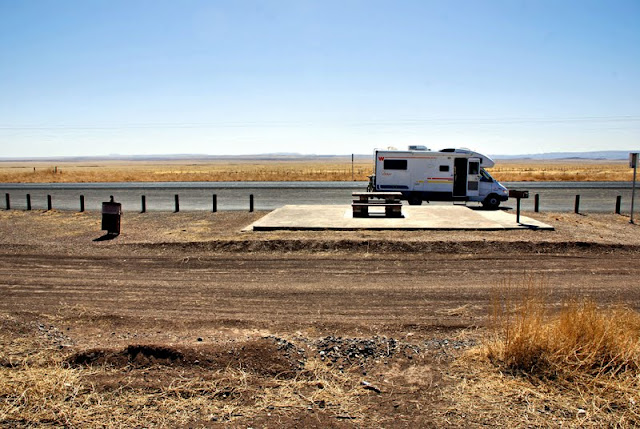 After lunch I walked around a bit and realized that the dirt road had been dragged by the Border Patrol so they could see footprints of people crossing. I walked back and forth a bunch of times up and down the road.    :))
Posted by John @ Beans and I on the Loose at 6:08 AM