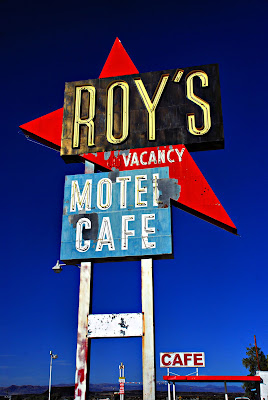 I just like this place. I showed it on my blog two years back, and cannot help doing so again. Below is taken from Wikipedia who tells the story of Roys Diner better than I.

Roy's Motel and Cafe was the only gasoline, food and lodging stop for miles around that part of the eastern Mojave and was well known for both its Googie "retro-future" architecture added to one of the original buildings and even more famous sign, a 1959 addition. Both Roy's and the surrounding town were once owned by Buster Burris, one of Route 66's most famous characters who purchased Roy's from his father-in-law Roy Crowl, the man for whom the property is named, in 1938 and ran the town until 1995.
In 1938 Roy Crowl opened "Roy's" as a service station on Route 66 in Amboy. Roy, together with his wife Velma, owned the town. In the 1940s Roy teamed up with Herman "Buster" Burris who married his daughter Betty. Together they expanded the business, keeping it open 24 hours a day and adding the motel to the service station and cafe. Business boomed in the deluge of motor tourists after World War II.

The routing of the old National Trails Highway (1914) and its better-traveled successor, Route 66 through Amboy saw a steady growth of business, especially at Roy's. The complex was so busy during summer vacation that Burris placed classified ads in other states to bring in employees. 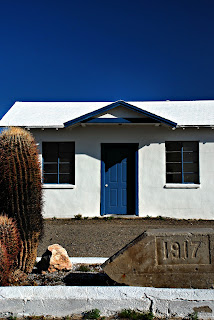 Buster sold the town in 1995, and moved to Twentynine Palms where he died in 2000. The town was owned by investors Walt Wilson and Tim White who mainly used for photo shots and to host movie companys. After the two lost it in foreclosure, it was repossessed by Bessie Burris, Buster's widow. Bessie sold the property in February 2005 to Albert Okura, owner of the Juan Pollo restaurant chain, who offered $425,000 in cash and promised to preserve the town and reopen Roy's. On April 28, 2008, Roy's reopened. The renovations and repairs cost $100,000. Albert Okura also has plans to open a cafe and mini-mart at the same location. 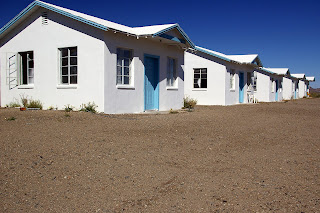 by only 20 cents per gallon in those two years since I was here last. That is a lower rate of inflation than anywhere else. Maybe I should move there.