There was a side trail about a half mile in. Not many people took this trail and I found myself alone all of the way. There wasn't anything special about Partition Arch itself but the view through it was. 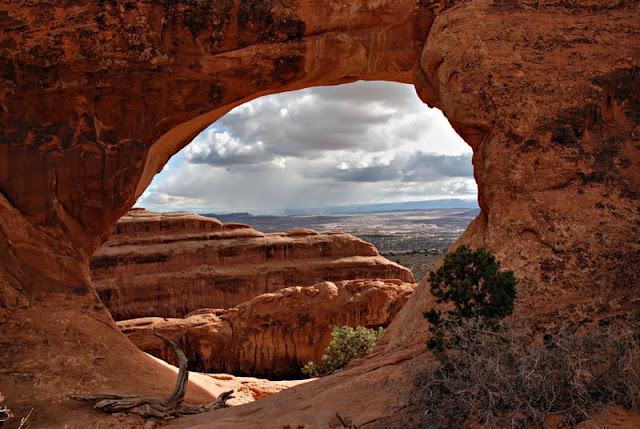 After I arrived at the arch, a woman showed up soon after. She looked fit wearing running tights, a tanktop over a long sleeve t-shirt, baseball cap with her ponytail pulled through the back and carrying a Camelbak water container on her back. She seemed in a hurry, quickly snapping a couple of photos and trying to get one of herself with the arch behind her. I offered to take the picture for her which she appreciated. So I asked why the hurry. She explained that someone was waiting for her back on the main trail and then rushed off. I later caught up with them. That someone turned out to be her husband. He absolutely looked like he was not enjoying any aspect of being out in nature or on the hike. I am sure he would be a lot more happier back home, sitting in his lazy-boy recliner, eating pizza, drinking beer, working on his ever increasing waistline and watching the game. I felt sorry for the woman.
Interesting formations along the rock wall. 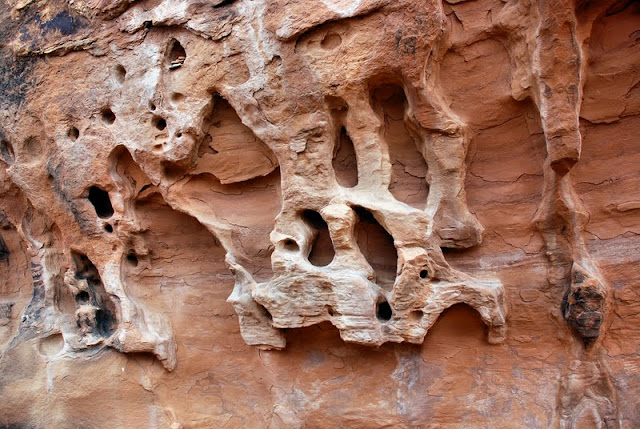 Next was Navajo Arch. Again, just another arch which I found what was beneath it more interesting.
Looks like one of those miniature dioramas in the museum doesn't it? 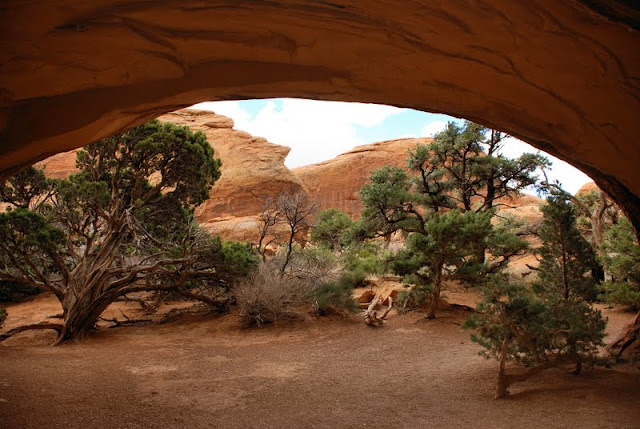 Back to the main trail which led on further to Double O Arch. 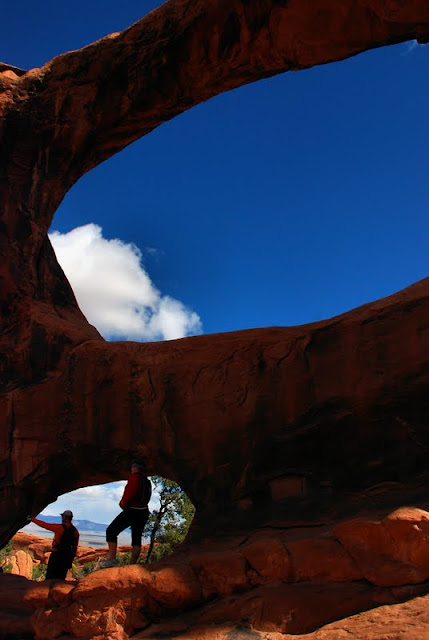 Beyond that was the Dark Angel (where do they come up with these names?) I had already hiked 5 miles and could see the Angel from this vantage point. That is it on the left about another mile away. After that, you turn around and go back the way you came. This here was far enough for me.
(Oops, I see I used this shot the other day. Well, here it is in color) 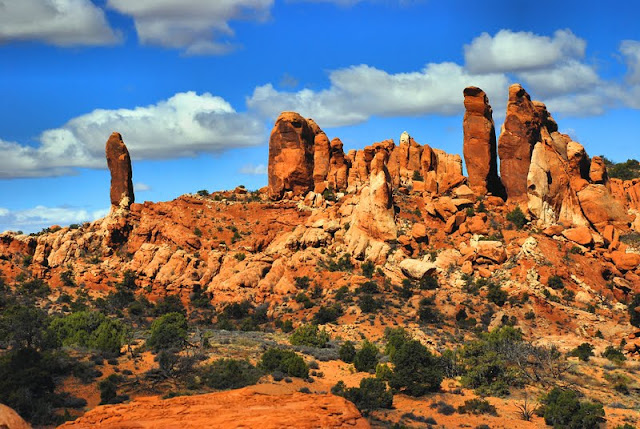 those arch views are incredible!

(i too feel sorry for that woman - what a terrible marriage if you can't enjoy similar things - or at least give free rein to one who does enjoy it!)

These are great first image is superb.

Great series!!!
The first shot is so cool, congrats!
Have a nice weekend. ;-)

I love the first photo. And I agree, the view through the arch is often at least as impressive as the arch itself.

Beautiful pictures. Maybe when I retire, my husband and I can have an adventure to the West. Just beautiful.

Your story of the woman reminds me of my recent trip to a pitcher plant bog. Met a wonderful woman who rushed upon us, chatted quickly, pointed out some pretty little orchids, and rushed to take a "quick look" at the river so she could get back to her angry boyfriend waiting under a cover area with a picnic table. She couldn't enjoy the view or the company because he dictated what she could do--. How is life an adventure when you can't soak it in.

Hope you and Sinbad have a wonderful weekend.

Yes, I see this sort of thing out there on trails fairly often, be it a married couple or better off a boy friend or girl friend like Laura mentioned. At least then one can dump the other. On the other hand, the couple in the previous post - the chipmunk and crawler, the woman was so kind and supportive of her husband, encouraging him all along. I thought it was sweet.

does it surprise you that the woman was kind, loving, and supportive and the men were jerks? :) there was a huge opening for that one.
I have a new favorite of your photos - the third one. what a magical place. you were so fortunate to be able to see all of this beauty and have a blast doing it. and to have a traveling companion such as Sinbad - you've got it made.

These are just breathtaking!