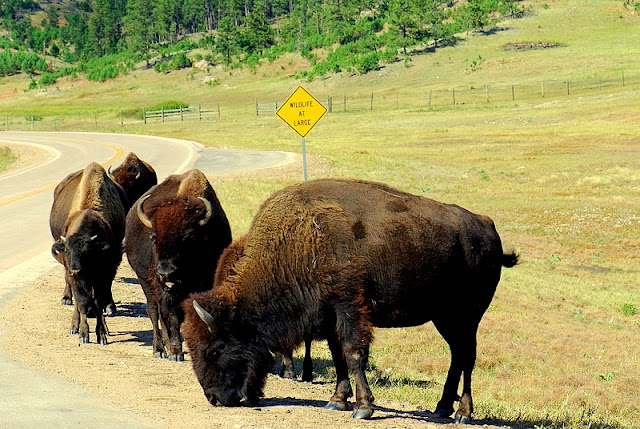 We really didn't care. We just wanted to see them.
We were getting a bit concerned though for it wasn't until we were halfway through Custer State Park that we saw our first buffalo.  Actually the correct term is bison. Early explorers called them buffalo for the closest animal they knew of that looked like what they were seeing were the buffalo of Africa and Asia. But if you refer to them as American Buffalo, that is acceptable.
We came up to the tail-end of a herd that had just crossed the road and settled into the nearby valley to graze. At first we had to be content with some long distance shots. Then after most of the cars that stopped pulled away (we are always the last to leave) some stragglers came by and we were able to get some closer shots. Between the two of us we must have shot a couple hundred times, I am talking camera shots. 150 years ago it would have been gunshots but I'll not get into that, nor what we would have seen at that time right now.  We were quite happy to say the least.
A few miles further down the road we came up upon another group which was even closer. By now we felt very comfortable being around them and was able to get some better pictures having to ditch the zoom telephoto lenses for our normal lens as they were so close.
They really are gentle creatures no more different than being around dairy cows. By the end of the day and the following day as we were driving along we found ourselves saying "Oh, it's just some more Bison."
But we stopped anyway.
We are in Nebraska now, learning about corn.
Posted by John @ Beans and I on the Loose at 5:46 PM

how awesome for you! and calves too! they're beautiful!

Wonderful animals to see.... I really do love seeing them ( my local zoo had a small herd a few years ago) thanks for your image they must have been fantastic to in their thousands...not really all that long ago.

that must have been exciting to see the herd of them. I recently went on a "mini-vision quest", led by a Native American, and the very first thing we did as a group was gather into a tight circle, seated around his spread-out buffalo hide. that was when I realized how large an animal they truly are - the thing was huge! I've never eaten bison meat, but I've seen it on the menu in more than one restaurant. I think their horns are really cool. did Sinbad get up on his hind haunches and check them out through the window? happy day to you all, and be safe!

I guess you've never seen a bison take on a car in Custer. What a show!

This weekend is the annual Buffalo Round-up. Tomorrow morning they will drive the herd on horseback and in trucks down to the corrals. The park can only support 1000 head over the winter so some will be auctioned in Nov to ranchers or anyone who wants meat. Last year we were there and it is an incredible sight!

Bison do seem very gentle, but I've heard tales of them charging people in Yellowstone. Not a good idea to get too familiar, at least not on foot! Glad you were able to get close enough for some good shots.