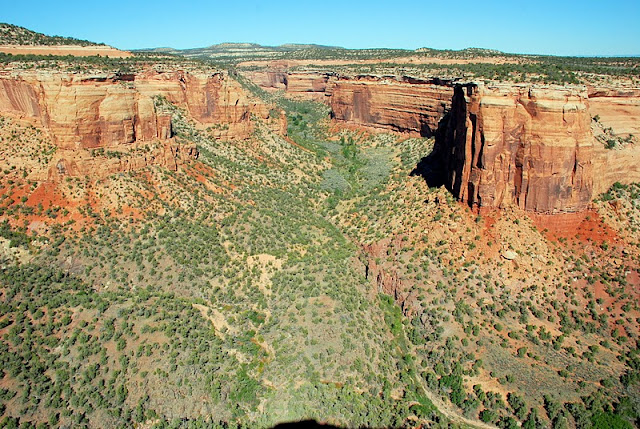 We left Grand Junction Colorado and toured nearby Colorado National Monument 6 days ago. It has been that long since being able to get online. This is a place we must return to.
It was across the border into Utah where we stayed the night in Green River State Park. The plan was to go to Great Basin National Park just over the Nevada border and spend a couple days there. When we arrived, like at Glacier National Park, we learned we were up against a size restriction for travelling the road past the lower campground. Sadly there was no hiking among the Bristlecone Pines for me and we left the next day.
Now we were ahead of ourselves so I planned a stop at Hickison Petroglyphs Camp midway across Nevada on Hwy 50, the "Loneliest Highway in America". I have stayed there several times in the past. It is pretty, quiet, sometimes having the entire campground of 11 free sites all to myself, and the night skies are just spectacular. We arrived around noon and tried to enjoy the rest of the day in the shade. For some reason though the flies and other pesky flying bugs were particularly bothersome. My wife tried to stay inside until the heat forced her out, where she then tried to endure the irritating insects as long as she could. Meanwhile I couldn't help thinking we should have kept on driving. As the afternoon crawled by, the flies continued their relentless quest and I began to beat myself up for stopping so early in the day. Now it seemed too late to drive with it being hours to nowhere.
A couple cars came up the dirt road to view the petroglyphs and moved on. Two campers drove in, one an RV like ours and the other a couple in a VW bus, but oddly they did not stay. It was now past 4 pm and I am really upset with myself. My wife, the trooper that she is, perseveres without a complaint and I became more disgusted with my poor decision. I decided to take a walk and use the pit toilet bathroom. The one near our camp was littered with rodent droppings on the cement porch. Inside it was just as bad. Even I drew the line on peeing in there so I walked on up to the next pit toilet. This one was even worse. The cement was barely visible but for the covering of rat turds. The flies were thick, escaping in a cloud when I opened the door. I moved on up to the main restroom at the parking area for the petroglyph trail. This was the cleanest of the lot, and at that, it was still dirty but I used it anyway as I didn't have to stand on rat crap to do so.
Just then, the one and only other camper staying there returned having been away all the while we'd been here. The camp was a trailer and tent set-up which had all the appearances of someone "living" here. The driver looked to be one of the highway workers and he came barrelling down the road in cloud of dust with Karen Carpenter singing as loud as the 8-track in his beat-up old Ford truck could manage. He slid to a stop at his camp, plopped down in a camp chair, beer in hand, filthy dirty and Karen was still carrying on with both truck doors wide open.
I returned to our camp, opened the screen door and my wife gazed at me with a numb look about herself. I described what I just experienced with the restrooms and concluded this is why all the flies and why the other campers did not stay. As Karen broke in to a new song "We've only just begun..." I said to my wife, "That's it! Let's get out of here.I don't care how long I drive." Her face lit up like a death row prisoner who had just been granted a pardon.
We drove on at 70 miles an hour (I usually putt along at 57) into the setting Nevada sun for over an hour when I nearly blew by a brand new (to me) camp opportunity. 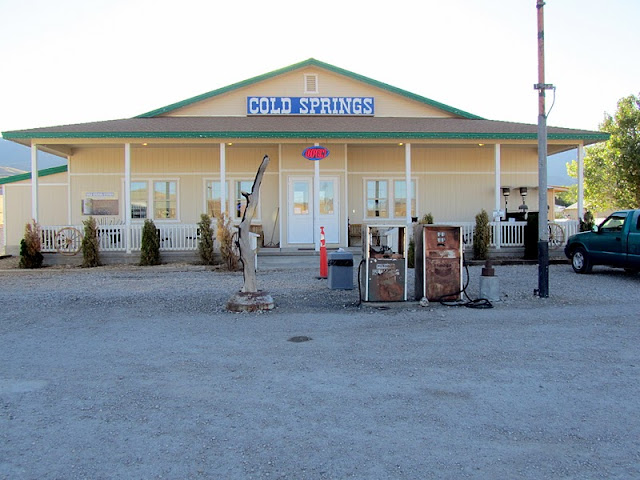 They had camping in the back and here we stayed as evening set in. I didn't recognize it as this day just happened to be their one year anniversary of being open after having burned down a few years back. It was all new, very nice and we had smiles on our faces once again. 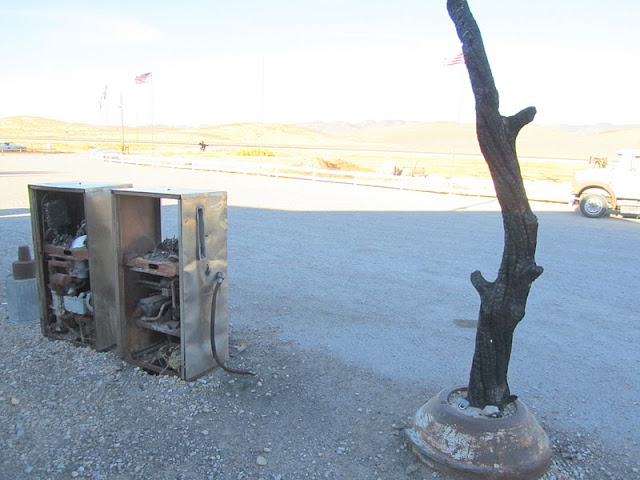 Leaving the burned gas pumps and charred tree stump was a nice touch.
They have no interest in selling gas again. 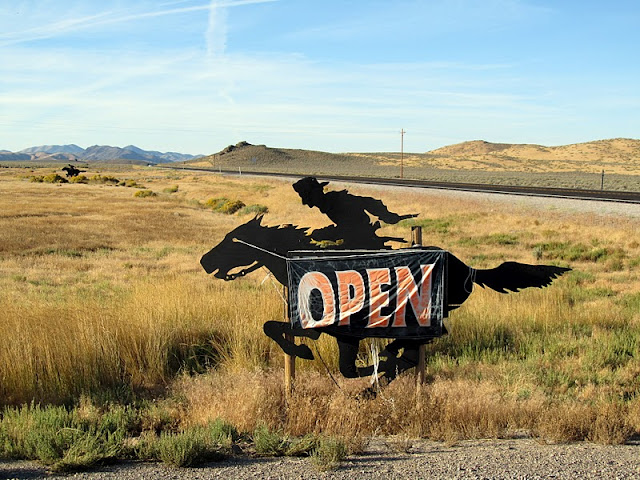 This was the only thing familiar to me, the pony express riders out front as this was a stop on the old Pony Express Route of 1860. Before, Cold Springs was just a bar where you could get something to eat and fill up with gas. Now they have several little cottages to stay in plus RV/trailer camping. Inside the bar, restaurant and gift shop was all bright, new and wonderful. This is a great place to stop and stay the night if you are in the middle of nowhere Nevada on Highway 50, the "Loneliest Highway in America" even if you are not running from flies and Karen Carpenter.*
We arrived home the next day after visiting 10 states and travelling 4353 miles doing so.
We now are cleaning up the Little House on the Highway and have hundreds (thousands for my wife) of photos to organize.

*We both like Karen Carpenter but this wasn't the appropriate time. My apologies. Sorry Karen.
Posted by John @ Beans and I on the Loose at 7:53 AM

what amazing Photo! GREAT!
This nature is beautiful!
I wished - there I would be at this place

from now on, every time i hear a karen carpenter song, it will forever be associated with rat turds and flies... ha!!!

glad you're back home again!

If I'm ever traveling across Nevada, I'll definitely avoid Camp Despicable. Sounds like your second choice was a good one!

Oh my ... such a yucky experience! fortunately only one blight in an otherwise beautiful area!

That first shot makes me long for a road trip. I will have to put it on my must see list.

A wonderful adventure... I've really enjoyed following you on it.
I'm pleased you decided to move on from Camp D.

4500 miles that's some trip...
I'm looking forward to seeing more of your images..

Really enjoyed this post... you are a wonderful storyteller! Vivid images of road trips and camping. Thanks!

Indeed we were crossing your tracks. We were at Great Basin NP on Thursday.