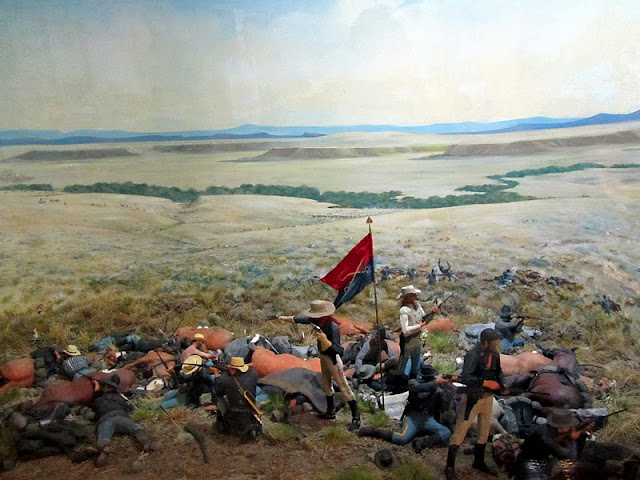 Here is one of those places we all know about and for me, never really thought of making a point of going to see, unlike Billy the Kid's grave (if you've been following my blog during the Texas trip you know what I mean). In fact, it wasn't even thought of before the trip. But I found ourselves in the neighborhood, saw it on the map, and took advantage of the opportunity.
Pretty cool! Try as I might, standing there looking all around the golden grass covered hills, it was really difficult to visualize what took place here 135 years ago. 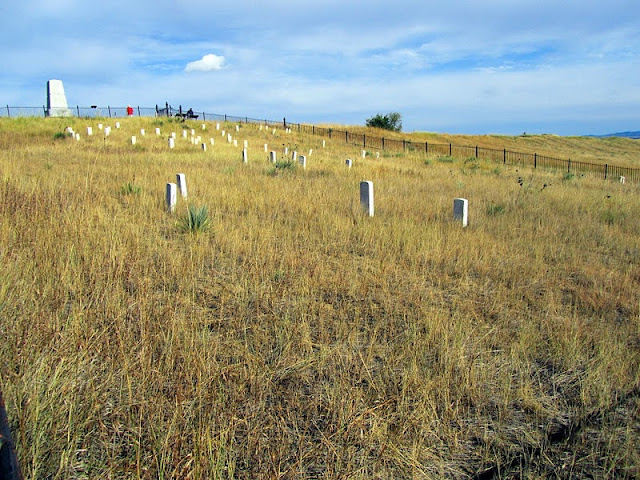 The visitor center was excellent filled with a lot of artifacts found at the site, a wealth of information about participants on both sides of the battle and a ton-load of books to choose from to buy. Way too many for me to consider so I just walked away with the brochure the Park Service handed out. 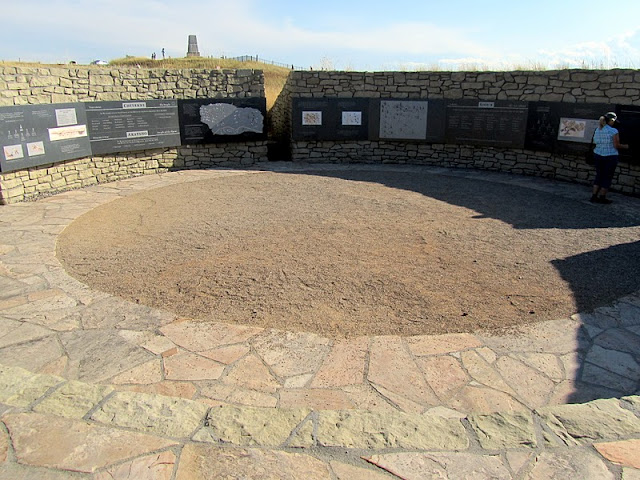 It was nice to see a memorial for the Indians who lost their lives in the battle. In fact, there even was one for the horses also, just to the left of the pillar on the hill where most of them are buried. The site was formerly called Custer Battlefield National Monument and was changed in 1991 to it's present name of Little Bighorn Battlefield so as to give the Indians equal representation. Red granite markers of known Cheyenne and Lakota warrior causality sites are throughout the battlefield. These markers would have the warrior's name, "Died here on June 25, 1876 defending his homeland and the Sioux way of life".
I left feeling bad for the Indians. Although they won this battle, they lost the war, their homeland and their way of life as the markers noted. I too felt bad for the soldiers for they didn't want to be there, they were just following orders. This goes too for the officers, just following orders.
Tomorrow we will be in Wyoming and will see where the road takes us.
Posted by John @ Beans and I on the Loose at 8:30 PM

Wow! It's good to see such a historic site is so well looked after... enjoy the rest of your trip.

i am glad to see equal representation for both sides of this battle. like you said, white men/armies were the invaders. and yes, so many just followed orders (as in any war).

it's been several years since I was at this site - we hit it when we moved back to the Midwest from Oregon. your middle photo is excellent for jarring my memory. My husband and I spent a good long time walking around and getting a feel for the place - he was heavily into Native American history. I love that they have a memorial for the horses, and I thought that the area was very beautiful. your photos do it justice, that's for sure. I keep wandering back to your previous post - Sinbad's photo. what a treasure. I think that one has become my current favorite Sinbad photo. what a dear. be safe.

That is something to be experienced. Love your photos.

I'm glad to visit this site through you. I've always thought it would be an interesting place to visit. Such a sad time in our history, for the soldiers and Native Americans both.