The Harleyfest in Prineville did not live up to it's expectations. I woke up sometime in the middle of the night and it was as quiet as a graveyard. These bikers don't know how to party.  We went  through the John Day Fossil Beds National Monument, one of those places I have always wanted to go see for way too many years but was never in the neighborhood. The terrain wasn't as I suspected it to be - bleak and desolate high Oregon desert. Instead imagine the Painted Desert with forest all around and that pretty much describes most of it. The Tom Condon Paleontology and Visitor Center was worth the price of admission alone (everything was free) and a must see if you do nothing else at the the fossil beds. That night we stayed in one of Oregon's outstanding State Park campgrounds, Clyde Holliday.
The next night was at Washington's Lewis and Clark Trail State Park. It was not as glamorous as the name implies. In fact I think Lewis and Clark had a much better campsite. This place was run-down. Each site was a dusty spot along the road surrounded by a dense overgrown jungle that rivaled the Darien Gap of Panama. One would thought the two boys and their Discovery Corps had built the restrooms had it not been for the plumbing which wasn't around in 1805. Okay, so these are hard times and as the campground host told us, Washington is in a bad way financially, just like California I guess. Plus we were a bit spoiled by this point. But we paid $22 to camp in both Oregon and Washington State Parks and there is a world of difference. Oh, the shower stories of each my wife could tell. Like night and day. Oregon is doing something right.
From there we headed east on Highway 12 which so happens to be the route Lewis and Clark took on their eastward trek home after leaving the mouth of the Columbia River. Being surrounded with all the Lewis and Clark history I am realizing as I drive along "This is one facet of U.S. History I've not read much about". We camped at a U.S. Forest Service camp (light years ahead of that Washington park) midway along the Lewis and Clark Highway a Wild Scenic River Corridor. That night I thought to myself "I need to buy a book about the Lewis and Clark expedition.

It went on like this for 123 miles. Did we ever get bored? 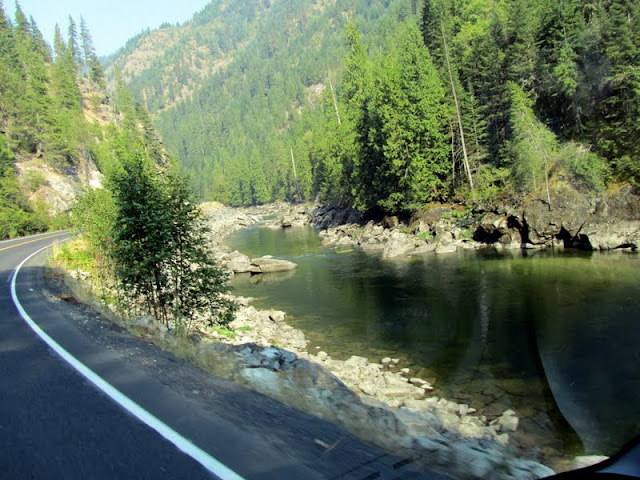 Nope.
This morning we continued on and pulled off at the top of Lolo Pass for no other reason than I had to pee. There was a huge parking area and the newly constructed visitor center. In fact, workers were still painting preservative on the logs of the building and moving boulders about along the entry into the center. Inside I immediately saw a wall full of books, and no bathroom. I'm sure there was a bathroom somewhere but I was too excited. Off I went back to the RV for my money, go pee, then back inside the visitor center where I got my book. Meanwhile my wife had found the FREE hot chocolate machine. We were two happy campers.
Tonight we are at a private campground just outside of Glacier National Park. There is lots more to tell but sorry, I have a book to read.

great score on the book! you should 'ask' for things more often. like a nice, clean restroom facility at each of your planned campgrounds! :)

Sorry the Harleyfest was a dud but you got to see some beautiful scenery. Can't wait to see the next shots.

Nothing like a road trip. Driving 80 in the midwest the highway follows the Lewis and Clark Trail for many, many miles. Always a thrill to be associated with the Corps of Discovery. So I understand that shiver of thrill you got being on the Oregon portion of their trek. Enjoy your book; you'll be in awe of the Corp's bravery.

several of your absolute favorite things ever!
a good book
miles and miles of scenic "blue highways"
and
anything FREE, whether it is admission or cocoa.

Enjoy. I am looking forward to the photos of the private campground, and of course Glacier. Be sure to watch for white-tailed ptarmigan at Logan Pass! Highly coveted bird, one of the "holy grails" and tough to get.

ooh, sorry about the Harleyfest being a dud. buy hey, at least you weren't kept awake all night! my sister could tell you some stories of how bad off Oregon is. She just retired as a librarian at the elementary, middle, and high schools in the town where she's lived for 30 some years. she said they can run down those libraries if they choose but it won't be on her watch. the state has been in a horrible economic situation for years and keeps cutting school funding (not the sports programs, mind you, but the libraries first!). sorry you didn't find John Day wilderness area beautiful. I drove through there years ago when I moved to Oregon and thought it was one of the most beautiful places on earth, but I love high desert. I look forward to reading your stories, and I'm happy that no one has peed their pants so far! give Sinbad a kiss on the top of his head for me. be safe.

I remember my third grade teacher, Miss Hoskinson, read a book about Sacagawea to us. Ever since then I have been a fan of hers and always interested in Lewis and Clark. It would be fun to follow their trail.

The Lewis and Clark adventure is a fascinating bit of history. No doubt you will enjoy your book as you travel their path.

Many thanks for a very entertaining read.. looks and sounds like a beautiful place to visit... I will leave you to enjoy your book...enjoy.