We left Lava Beds National Monument after a two night stay-over. When we arrived on Wednesday, only a few campers were there and we selected a campsite way off by itself. As it turned out this happened to be the primo camp spot of the campground. Someone even moved in while were were away, pulling our tag from the clip. He was evicted by the ranger. The morning we left we were approached by a man interested in the spot. I told him we were leaving in a hour but he better hurry as the claim jumper up the road had his eye on it. Meanwhile, two really old ladies came by and got into a discussion with the newcomer. By this time the newcomer had already paid for "our" spot and had begun moving in tent, chair, cooler while we sat there eating our breakfast. The two old women didn't let him come by it very easily but eventually sauntered off for easier prey. I later thought I should have auctioned off the site.

North we traveled through Bend, Oregon then veered northeast. It appeared we would be in the vast high desert lands of Oregon with no place to stay so I elected to do an early stop at the last town which would provide a place for us to clean up, charge up and wire up. That town was Prineville in Crook County that is, this weekend, hosting the Run to the Cascades motorcycle rally. Yippee! The one and only place to stay is the Crook County RV Park which is right smack dab next to the Crook County Fairgrounds where the event is taking place. I mean, we are like 200 yards away from the sound stage where rock bands play non-stop, 24 hours long, for the entire three day weekend. The good thing is the 9 foot tall stacked sound systems are pointed away from us and bikers do not go for Rap. Also, as the guard at the gate mentioned to me "This is Friday and the bands may take a break for a few hours tonight for there is a 'Brawl in the Barn' Ultimate Cage Fight being held in the Event Center tonight." Now there is a date-night opportunity to take the wife out on this evening.

So we are surrounded by bikers of only one sort - 99.9% of these people are on Harley Davidsons. Young, old, working, unemployed, retired, clean-cut, grungy, born-agains, you name it, all on Harley Davidson motorcycles. I like motorcycles. I've have had them most all my life. Still do. But I have never had a Harley. Not because I don't like them, but because EVERYONE has one! Where are these people's sense of individuality? "Ooh wow, my gas tank and fenders are red while yours are black." "Yeah, but I have more rivets and brads on my saddle bags and mud flaps than you do." I just don't get it.


Here is one of the .1%'ers who has some sense of individuality. He is two spaces down from us. Although I admire his creativity I wouldn't want it unless I could sell it.
I'm looking forward to him firing it up at 0'dark thirty tonight while I try to sleep. 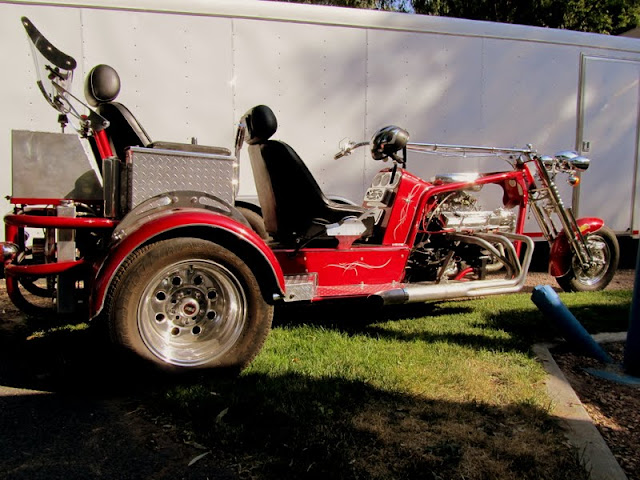 Okay, so I am poking fun at these guys and gals, but this is their thing and good for them. They're having fun and enjoying each other's company. All seem to be nice folk. We're not talking outlaw biker gangs like the Hells Angles or Devil's Disciples here. This year's event is dedicated to all the brave men and women of our country who give of themselves and their families to serve in the military, police, fire and first responders on this the 10th anniversary of the 9/11 attacks. Sunday will have several Memorial Rides to chose from, a tribute to our veterans of foreign wars and those who lost their lives on 9/11.
Ride on!
Posted by John @ Beans and I on the Loose at 6:15 PM

who knew you'd almost have to referee a property dispute over a camping spot!? :)

the weekend next to the bike rally sounds like it will afford a lot of people-watching (and listening) opportunities. like your idea of date-night with the wife! ha!

A wonderful post to read...
Sounds like you are having a lovely trip.
Enjoy the rest of your weekend.

That's funny about the camping spot! Sounds like you are having fun! Enjoy!

I love this - "claim jumpers". you are so funny. and you manage to inject into your writing all the drama that just took place right then and there. great writing and you had me laughing out loud. about Harleys. I agree with you about conformity. This is Milwaukee, the home/headquarters of Harley Davidson, and I tell you in no uncertain terms that THIS is the spot where owners take their bikes very seriously. I don't like the noise, and most of them are deliberately made to be loud. when Harley Davidson was threatening to move its headquarters to a (supposedly) less expensive right-to-work state last year, oh man did it freak people out. Union concessions were made with few disagreements! and little do people know, but Harleys actually come in different colors and designs too! but yes, black is the go-to color. hope you all were able to get some sleep during that Prineville stay. Did you drive through the John Day Wilderness/Fossil Beds? that place is so magnificent, it is unequaled in its beauty and I recommend checking it out. happy day to you all. I hope you're having the time of your lives. be safe.

I am sosososo jealous of you all. I would five anything to be out there right now. And that one motorcycle is the coolest thing I have ever seen. How I would love to have it. It actually reminds me of the old MG one of my boyfriends drove back in the 50’s. So nostalgic. Have a wonderful time. Bud is home safe and sound and I still have to put together the final post to put some closure on that part of his and my life. Be safe and have a wonderful rest of your trip. Genie and Buddy

Looks and sounds like you've been having some fun. Keep it up.