Saturday morning's lunar eclipse. I used my 70-300mm VR lens set at 300mm.
And I'll get it out of the way right now, it was too cold to my liking or in other words
t-shirt weather to those of you in the middle states, the east coast, Canada, the UK, etc. 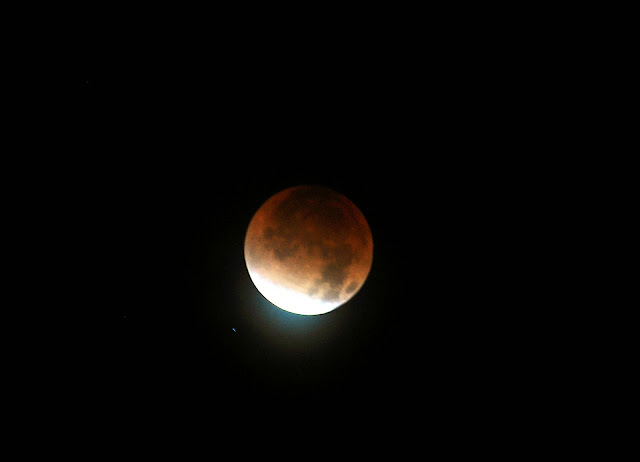 I tried my best to have it in focus doing so automatically (the camera got confused) then manually. 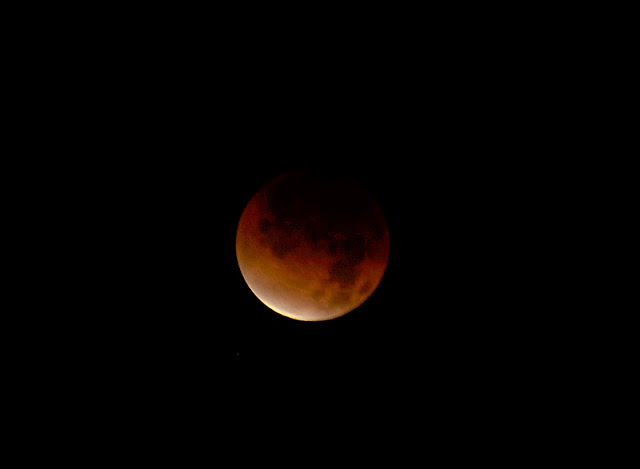 But they didn't come out that sharp and I was disappointed. It was so cold focusing with the glove off one hand yet I really thought I had the lens in focus. 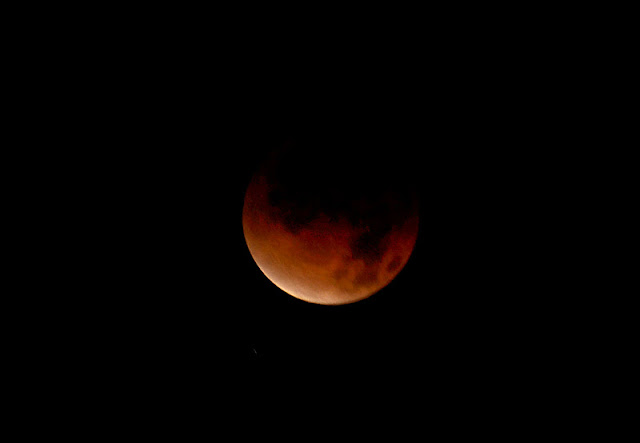 Then I noticed the little star at about 7 o'clock. See how it is a dash instead of a point? 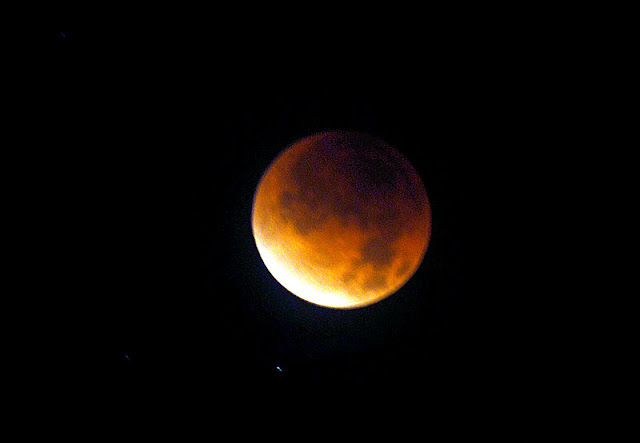 I did have it in focus after all. It was the long exposure time and the rotation of the earth that affected the sharpness. 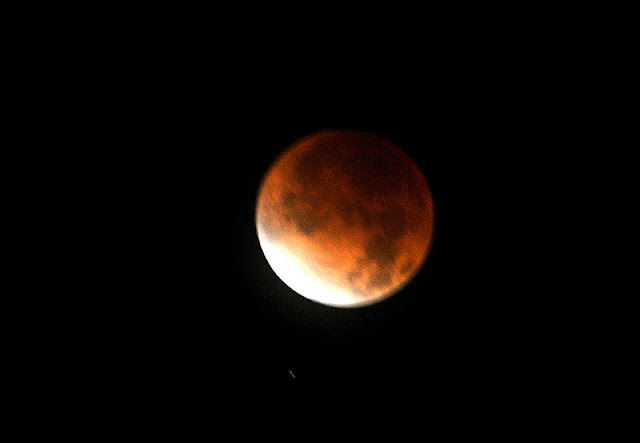 Of the 50 exposures I made during the eclipse over nearly an hour of shivering I picked these five images which are at 3, 4, 4, 5 and 6 seconds.
Early on in the eclipse I stopped the aperture down to f16 & f22 based on information I got off the Internet. The camera couldn't meter the small amount of incoming light and would leave the shutter open. I opened the aperture up to f5.6 and was in business but only to the degree shown here.
Any faster of a shutter speed and I was not getting any detail of the moon in full, only the bright crescent.
This shot below is at 2 seconds. Notice the little star is still not a pinpoint. 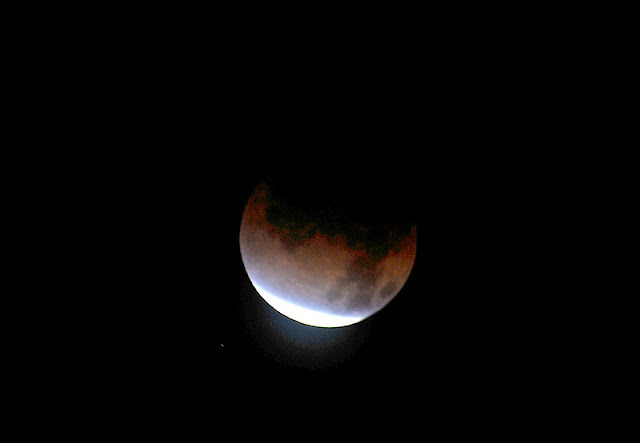 Now as I think back my biggest mistake was following the advice on the Internet. I only checked one source and should have consulted more. This one, who was using a 300mm lens, said to set the ISO at 100. I should have ratcheted it up as high as 800, kept the shutter speed under 1 second and tried some apertures in the mid-range of the lens once the moon was in totality.

An added bonus for the morning was observing just about the biggest and best meteor streak "shooting star" I have ever seen, just below the moon. It would not had been in the field of view had I pressed the shutter in time, but it made being in the cold all worthwhile. Really awesome with a long fiery tail.
Next time in 3 years, I can try again. That is unless I see some really good eclipse shots from my fellow bloggers then maybe I'll just stay in my warm bed 3 years from now.

A good effort John and at least you got to witness the event...

HI John... I say not bad, you have record shots of the event !!
Really fancinating how bright...like you can see right through it..pretty cool!!
I see that star...I think you did good ; }
Don't always go by the first..go for second advise : }!!
Grace

Your shots are quite nice and I really enjoyed seeing the star. I also enjoyed your "Lead Sled" - now there's a vehicle. Will come back to your site to browse. Found you via Genie. Thanks

I had the same struggles you did, but I didn't get to see the shooting star. When I got back in my car to come home the thermometer read 20 degrees, because it was starting to warm up, earlier it had been 18.

Don't be disappointed John, some things are not so easy to photograph.
Now I have an idea how the eclipse was. Thanks for sharing.
Practice makes it perfect! ;-)

which for beautiful photos of the moon!! I am enthusiastic!!!

WOW!
I missed it all because I didn't want to be cold.
Mark my words, next time I will be out there!
Your photos are amazing, boy did I miss an event!

not bad, though! thanks for braving the cold so i didn't have to!

i witnessed one of those glorious meteors a few weeks ago. totally unexpected and could hardly believe i had seen what i had seen. such a long, bright streak!

Great shots of the eclipse. I think the clouds added to the beauty of it. sorry it was so could though.
Betty and Joe
joeandbetty.blogspot.com

We were clouded over so I missed it. Oh, well!

I haven't played with night photography in several years. I don't know how I managed to miss the fact that there was an eclipse. Maybe in three years.

well this story begs the question - just how cold was it? I think the photos are amazing. I wouldn't even attempt anything such as this with a camera - it would be enough just to witness it and have the memory. My luck at night photography sucks so bad -I've learned to watch and let others do all the work. my favorites out of all are the first two. I forgot about the eclipse so I was sleeping away in my warm bed! happy week to you John.

I think the photos are great.
Lunar shots are a challenge, especially when you're freezing . I know the cold temperatures kept me inside so I didn't even attempt. Maybe I'll be tougher in 3 years...but it's doubtful.

I think they came out pretty good. I appreciate all the detail of your various shots. I've been playing around with night photography with limited success, and always trying to figure out best camera settings. Still a work in progress for me.

Thanks for these shots.My son has been obsessed by the planets ,eclipses and moon phases for the last 12 months.Sadly,here in Melbourne,drought capital of Australia, it rained for 24 hours straight, so he was pretty impressed by your images.