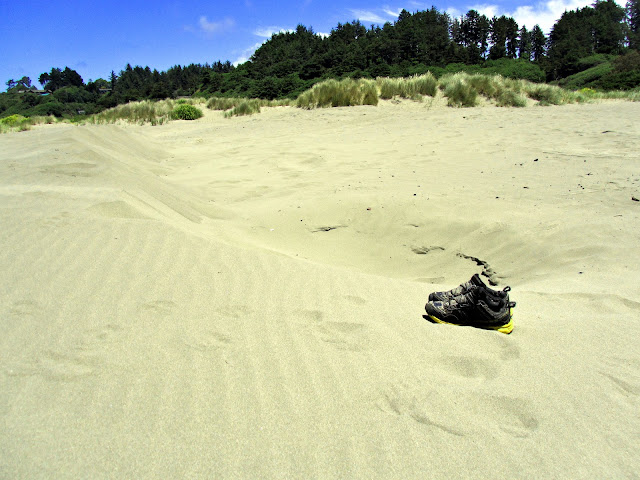 ...just walk off and forget their shoes?

Quite easily if you're a kid.

I left them there thinking the kid, or his parents, would later come back to pick them up.  Then I thought of how many people before me did the very same thing, leaving them for their owner to return?  Thus there they sat 13 days later, as I walked away.

This brings to mind not long ago when I went to a Kohls department store to buy a new dress belt.  In trying on several prospects I had removed my old friend that had been faithfully holding my pants up for far too many years for me to recall.  The next morning when I went to put on my britches, my old friend was missing.  My heart sank.  I drove back to Kohls and was there when they opened the doors.  Off to the men's department with slim hopes I speed-walked and miraculously my moldy old worn out military web belt was still hanging there draped over all of the shiny new leather dress belts right where I had left it, 24 hours earlier.  I grabbed my baby and marched out of the store, my head spinning with my good fortune.  What were the chances?  How could no one, especially store personnel, not notice this mangy looking belt hanging there at eye level?  Now, whenever away from home, I never ever set anything down but instead hang it off of me somehow.

My life has come to that.

I always wonder why people lose shoes, mostly you see jus one. But at your photo they are placed together, strange...I think the people in the store hadn't even noticed your old belt.

I had to smile at your last comment, John! Yes, it has come to this...we are, however, not getting forgetful because we are getting older! I am firmly convinced that I simply have too much knowledge running around up there and some things just naturally get pushed out! Unfortunately, the things that get pushed out are frequently related to where I have put things...that's my story anyway!

Reminds me of a similar incident a couple of years ago John.
I'd set my video camera up at the monument overlooking Wigtown and left it running.
I headed off down to the Isle of Whithorn and Port William taking photographs. I saw something I thought I'd like to video, but after searching the car there was no sign of my camcorder.
After realizing where I'd left it, almost three hours had elapsed.
I hotfooted it back to Wigtown, where it was still sitting as I'd left it with just the battery run down.
The chances of no one walking up to that monument for three hours must have been a trillion to one. (Unless they thought it was a candid camera trick)

I had hoped you had taken a photo of the mangy dude hanging among the youngsters.

Hi John..Today you showed up ; }!!
I am always amazed in this day and age..my mother would have made us find our jacket shoes or what ever..and to begin with we knew we would get in big trouble if we did!
Sure glad your britches will be held up by old faithful,you sure was lucky.. thanks to slacker employment!!
Grace

My dad just left his wallet at the check out at the local grocery store Friday... called me about to have a fit, so I had to call corp cuz they don't post local numbers for each store & the guy called our store & said they found his wallet & would be waiting for him to come get it... That was a relief! WoW! It could have been such a mess!!! =0

Those old military web belts were the best. I wonder if I can still pick one up at the Base military clothing sales store??? Cool shot of the shoes in the sand.

There are those moments when you just want to kick your shoes off I guess.

Yep, it amazes me when I have seen that happen at the beach! I bet that kid told his parents he couldn't remember where he left his shoes!