All of the beach photos for the past two weeks were taken at Clam Beach just north of Eureka, CA.  It is a small county operated camp area (really a parking lot) just off of Hwy 101, cheap, no frills and with pit toilets.  I can always count on it for a stop over for the night.  This fellow pulled in an hour after we were there.  He was by himself in a small clean bright red Honda Civic Hatchback with fancy wheels.  He just kind of hung around his cement picnic table, standing there, looking off into the distance, much like he was waiting for someone else arrive.  He was always drinking something - water, a soda, an energy drink, but never a beer or liquor.  After a couple hours of this, he walked off behind us over to another area with a hatchet in his hand.  Nothing else, just that hatchet.  I thought that strange.  There is no firewood to be had.  Utterly no reason to carry a hatchet with you.  Awhile later I noticed he had returned and continued his lookout, always with that smile on his face, like he's having a simply glorious time.  He then began to methodically do something on the table.  I got out my binoculars. 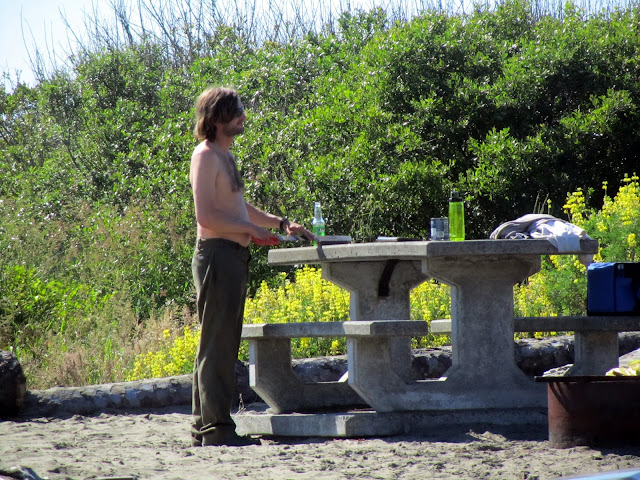 If you are unsure as to what he is doing, he is sharpening a machete on a whetstone.  Back and forth.  Back and forth, stopping only to test the sharpness of the edge with his thumb always with that devilish grin on his face. 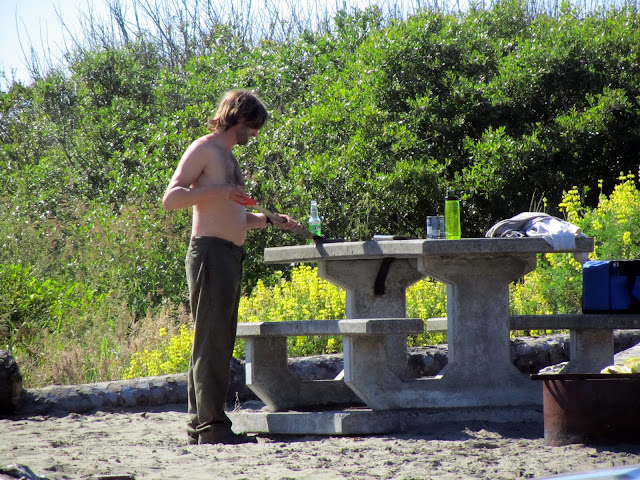 After awhile he left for the pit toilet and I just had to check things out more closely.  He was from Minnesota and had a couple of fishing poles draped over the passenger seat.  Otherwise, nothing else in his car looked unusual.  Not once other than taking his hachet for a walk and visiting the foul pit toilets did he leave his area.  He slept the night in his car on the driver's side.  No one ever showed up to meet him and he left early the next morning.

I had it in mind to write up a funny story about him and all that he did, but in the dark of the recent tragic event in Colorado it just isn't appropriate.  Thus I just present the facts here.  Strange, a bit odd, maybe even creepy to some, but most likely simply harmless and probably a nice guy, but I wasn't about to go strike up a conversation with him.  You just never know these days.

Another lone wolf. I think you did the right thing, with the machete you never know.

I agree, John! You just never know - and we have sure had some strange loners in our world these past few years. Good idea to keep a watch on someone like that - I think I would have been totally freaked out by the machete sharpening!

It's probably all perfectly innocent, though after a lifetime of watching films, it certainly doesn't look like it. Man sharpening machette in lonely car park!! Oh dear me. I hope you kept Sinbad in!

Yes, best observed from a distance.

You are right, you never know. Real shame about Colorado - my heart goes out to all those affected by it.

I would have run off, that's for sure!

That guy knew how to have a peaceful time without being bothered by anyone!

There are some interesting people to meet in that part of California.

I don't think it normal behavior for someone to be sharpening a machete in a public place. I don't think it normal to be sharpening a machete in private either I guess. but with a devilish grin on his face? Naw, there's something going on with this one. It would have been interesting to strike up a conversation with the guy, to see what he had to say. But I wouldn't have done it myself! Curious. Did you write down his plate number? I read too many thrillers...

I think he was on his way to a wilderness area where he was planning to do some bush whacking. Too bad my husband wasn't there. He'd have struck up a conversation with him to find out what was going on. Me? I'd be hiding. :))

YOu are a great story teller. The way you told us what was happening around you was so interesting. His behavior was a bit bizarre...I worry about Buddy when he is out in the woods for fear he will come up upon someone up to no good. He does not have a fear in the world. Just plugs on up and down the mountains. He heads back out tomorrow. I am really in awe of the 90 year old woman hiking. Bud said she was waiting there for her grandson to visit her before she starts thru the wilderness area. I would no more do that at 73 than the man in the moon. genie

Ha, great story. My husband can see someone pass us in a car and suddenly tell us his entire history--like he knows it! It's all supposition, but it entertains us. Your story entertained me too. :)