As the story goes, Pete Kibble lived in the area and due to some sort of railroad accident got his foot lopped clean off.  Now Pete is a guy I think I would have liked.  Unlike most people, Pete gave his foot a proper burial complete with headstone (or footstone) with the thought in mind that someday when the rest of him died, he’d be buried there, reunited with his foot, figuratively speaking.  It was 1917 and as time passed Pete along with many people of that period thought they could do better for themselves out west so there he headed – or hopped.  Pete never returned to Missouri and we have only his foot as a reminder of a man whose careful planning went afoot.


Just to the right of my left foot you can just see the tombstone a foot away. 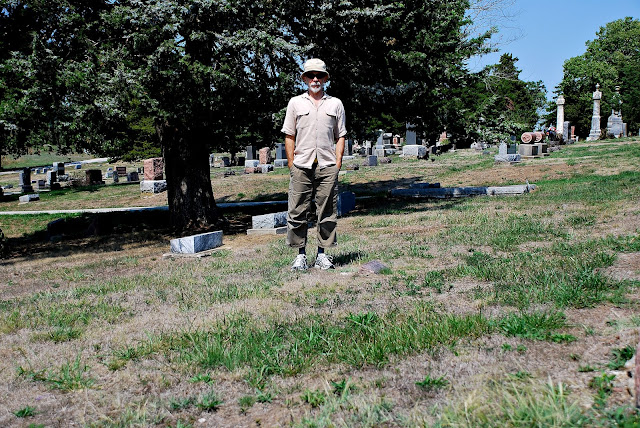 Now I didn’t have much to go on in locating this site and was happy just finding the cemetery itself.  Once there all I knew was “southwest of the flagpole”.  So like Tuco (Eli Wallach) in The Good, Bad and Ugly at the end of the movie, you can picture me going up and down all the rows of gravestones looking for one in particular, only I wasn’t running like Tuco was.  Now imagine me suddenly exclaiming “There it is!”.  I was really surprised I found it.  I stood there just smiling at my good fortune, picked up a bouquet of fake roses lying off in the grass nearby and placed them at the grave site of Pete Kibble’s foot. 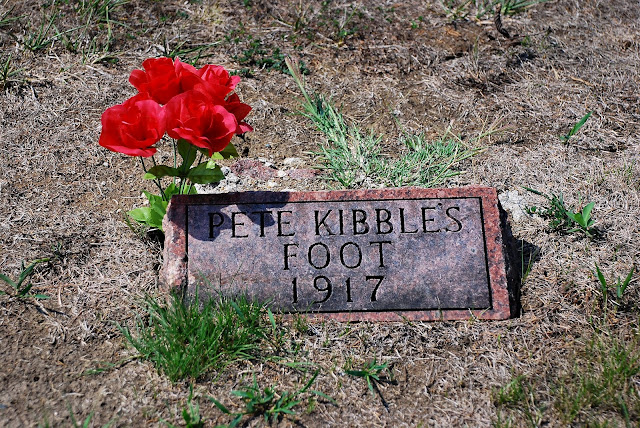 Really, this trip is more fun than a scavenger hunt.

This is amazing…a grave for a foot. Makes one wonder how many other graves hold limbs or pieces and parts. Boy you really did have a plan to find a lot of obscure places!

you make me laugh!

That is too funny, well maybe not to Pete.

I always have fun with your adventures!
Have a good weekend John! ;-)

You constantly amaze me at the fun things you manage to find...I am still smiling at Pete Kibble's Foot...

Amazing! Well worth the journey!

Too funny... never heard of having a "head"stone for a body part!

Been There Done That! Just saw it this week.