﻿
After seeing today’s points of interest it was time to start looking for a place to stay.  I was well into going the wrong way that I had intended before I realized my error.  Yet now heading towards Springfield, Missouri I was presented with more options for somewhere to stay for the night, so I’d make the best of my mistake.  There were no nearby State Parks and being a Saturday, they could be filled with weekenders anyway.  A private RV park would be my best option.  None I was approaching had glorious reviews then suddenly in Rogersville I saw Silver Bell RV Park and wheeled the Little House on the Highway in.  I found myself in a mobile home park.  Just as I was looking for a way to exit, there off to the side I saw the traveler area.

I went up the steps to the office. “Ring Doorbell”.  I did.  No response.  I did again.  I cannot hear a bell ring and there’s still no answer.  I walk around to each side of the building…nothing.  I stand there weighing my options.  I’m tired.  I want my cup of tea and I need a shower (there was none last night you recall) and the humidity isn’t allowing me to go long without.  Then a little car pulls up in back and this huge man rolls out.  I ask if he is the manager and he asks if I rang the bell…wonders where his wife is…maybe she’s in the shower…sorry about it all, and ended it with “I’ll meet you at the door” as he fumbles with his keys trying to enter from the back.  I walk in to their home/office and the reeking stench hits me like a bag of dirty laundry.  Greasy food, cigarette smoke, accumulated dirt and filth smells from a double-wide trailer where the windows are never opened contribute to it all.  Lloyd takes my $22 and pretty much lets me pick any spot I want in the flat, easy to pull in, wide open paved and grassy area.  This part is nice even though there is no shade but the temperatures are pleasant finally so no worries.

After I have my tea I tell Sinbad I’ll be right back and leave to take my shower.  This requires a short hike through the mobile home park.  I round the turn and view a building smaller than any of the trailers and RV’s in the park.  This must be the laundromat I think as I walk in.  It is that plus two bathrooms marked MEN, WOMEN.  And they are just that, one bathroom each with a toilet, a sink and a shower.  You lock the door to take a shower and anyone who wants to use the toilet is SOL.

It is a fiberglass stall with exposed water pipes and the vinyl shower curtain that is constantly attracted to your body.  But the water flow is good and temperatures nice and I proceed.  Midway through I notice where the water pipes come in through the cinder block wall.  A 4-inch wide section of cinder block is knocked out so that two small little ½ inch pipes can come through.  Anyone doing their laundry on the other side can look through easily.  “Mommy, there’s a man taking a shower.”  No, this did not happen to me but that was my first thought.  My second thought was “Is the woman’s like this?”  Then I follow the pipes and see they go next door through an even wider section of knocked out cinder block.  Can’t be; there must be a storage area in between I think.  While drying off and getting dressed I decide to check out the women’s.  It is the same set-up and although I wouldn’t be able to see a woman in the shower from the men’s side, I could see her sitting on the toilet.  Not the evening’s entertainment I had in mind.  I check out their shower.  It is vile!  It isn’t a fiberglass stall but a disgusting dark gray cement enclosure.  There is a nasty foul looking thick black mat on the floor with matching black mold growing up the walls.  The floor looks slippery and slimy, no doubt the reason for the thick mat as to cushion your fall.  It is the worst shower I have ever seen and I’ve seen a lot.  If I were a woman, I’d use the men’s without question, even if little kids can peak through.  Then again you ladies reading this, you’d just go without a bath that day.  I am just glad my wife wasn’t with me on this one.  I debated on going back and taking a picture of it for the blog but I don’t want to lose any followers.


Indications you may not have chosen wisely your place to stay for the night.
When this is your fellow "camper" across the way. 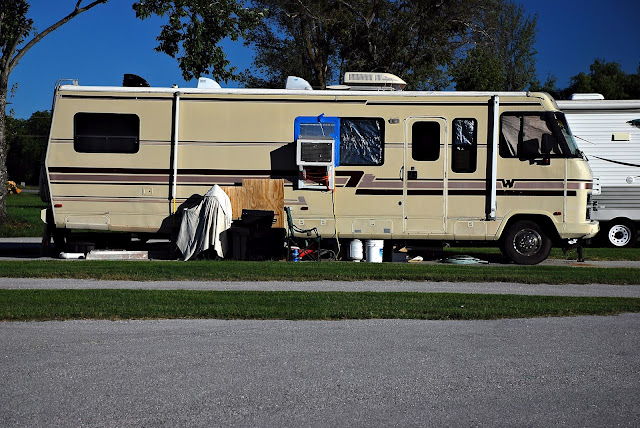 Or your neighbors next to you are members of the Sons of Texas motorcycle gang.  The six-foot tall rail thin Texas biker chick with the ever-present Marlboro hanging from her lips was fetching in the "bad girl" sort of way.
Heard on Radio: Sept. 7 would have been Buddy Holly’s 76th birthday.  Yesterday, Sept. 8 would have been Patsy Cline’s 80th birthday.  Strange that their birth dates are right next to each other and both would die in plane crashes.

I am wondering if you had "shower shoes" with you?
Maybe next time you might want to "check things out" before paying your money?

Too funny. Better luck next time.

It's all a conspiracy to keep the women's shower gross so that they can use the one with the peephole! This was a great post. Only one toilet, and you're SOL - hahaha literally!

thanks for the 'flavor' of the place!

...an 'eye-opener' for sure. I'd have dipped out on the shower and just run a tap outside for a quick sloushe'. Obviously these places don't need an approval-check-rate for motorists on the go-by.

Remind me some day to tell about our camping venture at the Gold Mine Campground in NC...we could swap some pretty nasty stories! I shuddered at your descriptions...

We've been camping a fair bit of late and shower and general toilet facilities can be variable. Seems you've found the bottom end of the market this time. May you're next stop have a palace for a toilet block.

you are correct... I'd have skipped the shower. :)