We entered Arkansas and in short time was coming across some really great photo opportunities of old dilapidated wood shacks and shanties.  Yet all I could do was catch a fleeting glimpse as the narrow twisty Ozark mountain road offered no shoulder to pull off onto.  It was very exasperating to have to let so many great pictures go uncaptured.  The first point of interest was up a tortuous grade and really wasn’t worth the effort.  Once off the mountain and onto the flatlands again the next two points I failed to find - one a small city park and the other a cemetery.  How hard could that be?  My luck seemed to be running low this day.

I even asked the woman in the service station directions to the park.  Once I got going though I realized I had paid little attention to what she told me for I was captivated with her southern drawl.  This happened again when I pulled off the side of the road to what once was a motel but now are permanent residences.  I wasn’t sure if I was on the right road to a campground.  Outside one of the “rooms” sat this woman with 7 little girls running around.  She was rather large, wearing dirty shabby clothes and missing more teeth than she had but she was so polite and kind - she must have said “sir” at least 3 times in addressing me.  The little girls, all barefoot wearing a hodge-podge assortment of clothes, were so excited that the Little House on the Highway stopped to talk with them.  A couple of them were jumping up and down squealing with delight.  I loved the moment.  Then when checking in at the state park campground the young girl had the strongest southern speak of them all.  I had to tell her with all respect, I could listen to you talk all day.  I love it.  My next Goofy-Things-to-See tour has to be through the south. 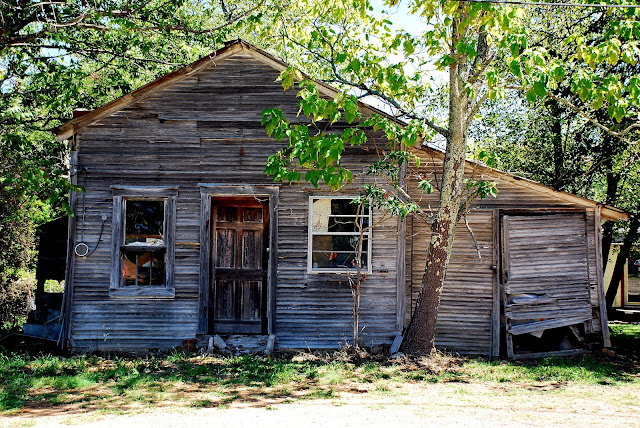 This place doesn’t compare to some I missed out on but I’ll take what I can get even if it is upscale in style. Seen in Ozone, Arkansas which was no more than a fly speck on my map and lived up to that in real life.

Oh gee, I am jealous now. This is my grass roots. I love the old house on your blog this morning.

All I can say is, "go yonder" and don't miss a thing.
Do they have airports there?

i love that you were so distracted listening to them speak that you didn't hear what they were saying. :)

There are some parts of England - notably Northumberland - where people from the next county have trouble even understanding what is said. That's a fine picturesque shack - as long as you don't have to live in it.

The "No Turn out, No Photo" problem plagues all our roads! So many missed photo ops and no way to go back and get them--loved the shack picture!

Charming story! I wish I could have been there.

Bet it was once a cute home.

I am loving every minute of your journey...well, except for the shower thing yesterday! Great descriptions and our wonderful talking points make me feel like I was there with you!

Nice to read about the language and your description of the way they looked. They must be very poor people but are not hostile to talk with you. Yout riding home must have been a miracle for them.

LOL! I take all of that for granted. Fun to see someone from the outside come into my world. We once took a trip to Ft. Lauderdale FL. We went into a quick mart and the attendant told us, "You must be from the South." How much father south can you get than south Florida! Yeah, and he wanted to hear us talk. LOL! For the record, Paula Deen is a fake Southerner; she puts too much twang into her "south". I always want to punch her when I hear he speak. :D

Really enjoying this tour. I've read from the top down! Wish we all had time to do this! Lucky you.

Makes me wonder what is happening next, what with moldy showers, holes near the pipes, deep southern accents, worn down houses . . . I hope it won't be a bit of Deliverance next . . .