The world's largest Sandhill Crane - made of steel. 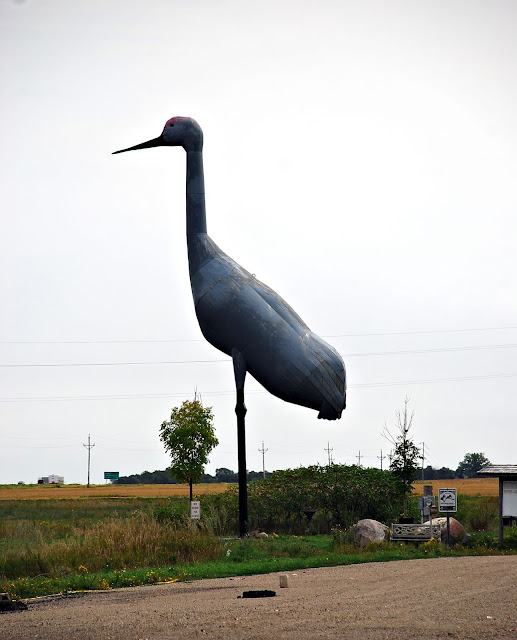 This is what I came here for and was surprised to find that I couldn't get any closer than 100 yards to it.  Police caution ribbon kept me back, along with a fellow missing a few teeth sitting in his car.  He was on guard to keep people away from the "crime scene".  Here's the story.

The Sandhill Crane stands behind the Lone Steer Restaurant and Motel.  On August 12, not quite 3 weeks ago, at around 9am a man set fire to the restaurant.  He is now in jail.  I asked the guard if the arsonist was from around here.
"No, he is from Texas."
"Texas!" I exclaimed. "Why would he come all the way up from Texas to burn up a motel and restaurant?" I wondered out loud.
"He was working on a road crew and staying at the motel.  He went across to the service station and bought some fuel then set the place on fire."

"He must have been pretty unhappy about his room or food to do this.  How old is this guy?" I asked.
"50."
I looked around then asked if this little town had a fire department.
"Yeah, a volunteer fire department."
"Well, I wouldn't think the response time would be too great.  Couldn't they have saved at least part of it?"  This is when the story really got weird.
He told me they just stood around and laughed watching it burn.  Then he added that two other fire departments responded from neighboring towns and they too just stood by and joined in on the laughter.

I was at a loss for words and walked away to take more photos.  Just then someone else wheeled in and the guard informed him he couldn't go any further.  This fellow, looking all of like an insurance agent switched into attitude mode and words were exchanged.  The guard fired up his cellphone.  I figured he's calling the owner who had hired him to watch over the "scene".

Mr. Attitude took a few pictures, said he got what he wanted and then sped off.  Within a minute a mini-van rolled in, the owners I presumed, and conferenced with their hired guard.  The owners were of Middle Eastern origin.  Well now there's a clue. 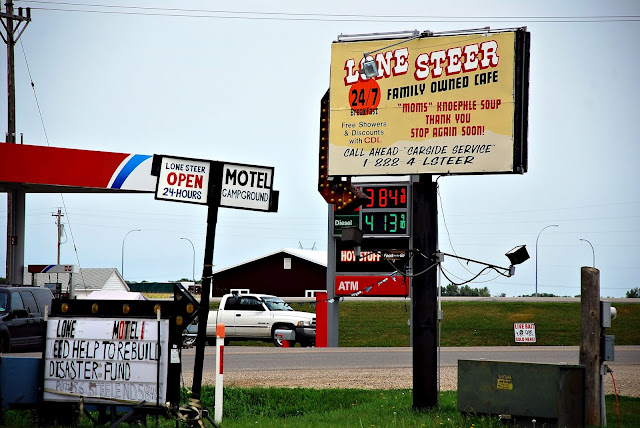 The flag making companies are doing a brisk business in this part of America.  I've not seen the stars and stripes flying in as great of numbers as I have since I entered Nebraska and the Dakotas.  I've seen lots of "Support Our Troops" slogans and a multitude of yellow ribbons tied around fence posts and mailboxes.  Not that there's anything wrong with that or to imply anything in particular, just reporting what I see.  And yes, I am sure there is a lot more to the story than what the toothless man in the beat-up old Honda was telling me.  Especially when he told me this made the world news and was reported on CNN.

Thanks to our roving reporter for bringing news of the wild and weird from around the country! I smiled, then laughed at your post today. I don't condone burning anyone's property - guess others didn't feel that way! Very strange goings-on around this country! You are having some marvelous adventures, aren't you!

Presumably the arsonist thinks that the family who own the motel, making beds and cooking meals for travellers, sneak out secretly at night, pop over to Afghanistan, plant a few roadside bombs then get back in time to serve breakfast in the morning. We have the same kind of idiots over here, something I was made painfully aware of a few years back. The father of one of the disabled children I look after appeared to pick his son up for a weekend at home. Usually he is a large, jolly man who comes in laughing and joking with everyone and making himself quite at home. But on this occasion he entered very sheepishly and asked if he could come in. It was so odd that I thought he might be feeling ill, offered him a seat and made him a cup of tea. He seemed extremely grateful and within minutes was back to his usual self. I realised afterwards that the man is of Egyptian origin and two days before the bus bombings had taken place in London. He was unsure of what kind of reception he would get.

Hmm... a very interesting story with a lot of possibilities.

i absolutely hate the overtones to this tale. i truly hope it is not the case, but sadly...

hatred is a terrible thing.

That's one big crane. Wow, gas is higher there than it is here.

This world is full of crazy people... But it's an interesting story. ;-)

You are the best story teller. This one is a one-of-a-kinder. You told it so well, and the photos added so much. Hope all is well. I really do need to start posting some photos from Bud's 3 weeks climbing up and down the mountains. genie