Where the Monster was Created 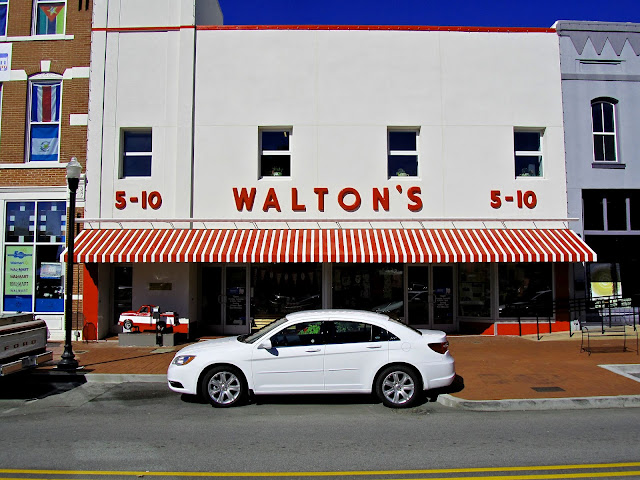 I had every intention of mocking and making fun of the birthplace of Walmart.  The little store in front had items in it just as you would find in a Ben Franklin 5 and 10 cent store back in the 40’s and 50’s.  Sam started as a management trainee for J.C. Penny Company in 1940.  After his stint in the Army he opened two Ben Franklin variety stores in Arkansas in 1945 and ‘47.  It was in 1950 he and his family moved to Bentonville and he opened his own Walton’s 5 & 10, a Ben Franklin franchise.  In 1962 he then opened his first Walmart in Rogers, Arkansas and I drove right by it not knowing too.  The museum in back filled with the history was very nicely done and I hate to say it, impressive.  I could have spent an hour or more in there, but I didn’t. I wasn’t interested. Impressed, but not interested.  I have more to show once home.  The lady gave me a 50 year (2012 is the 50th) souvenir book.  I’m hanging on to that.  I know in time it’ll be worth a lot on eBay!

I want to add that Bentonville was a really charming town.  The town plaza was very much like those in our winery towns back home in Sonoma County with all the little shops and boutiques.  The old town with period homes and Victorians on quiet shady tree-lined streets, well you get the idea.  I can see why the Walton’s moved here.

you do have to respect the incredible growth and the impact this man has had on the retail industry, if nothing else. :)

and i LOVED the ben franklin store in the 'city' near my home town. :)

I wish it could have stayed that way.

btw, the beach town I stay in every year still has a Ben Franklin. We love that place so much that our vacation is never complete unless we visit it.

I agree with Texwis, he did build one heck of a business.

The shopping experience would definitely be different without Sam Walton.

Looks like a real blast from the past - even that old red truck ride parked out in front!

Interesting piece of Walmart history that I never knewed! Small towns can have a lot of charm!
Peace :)

Just caught up on your last several blogposts. Am enjoying traveling along!

The Walmart name never made it over here but the are the whole owners of Asda who never seem to have managed the market domination here as they seem to have in America - we've got our own monsters. Good to see where the original was though.

I think Sandy is referring to Tesco.
As a kid I love the corner co-operative, yes bring back those days. Everything is much too convenient nowadays.