What brought me to Boise City was the prominent role it played in the book about the dust bowl I had just finished, The Worst Hard Time by Timothy Egan.  As it so happened in many of the towns we visited, there were other stories to be uncovered.  This is one of them. 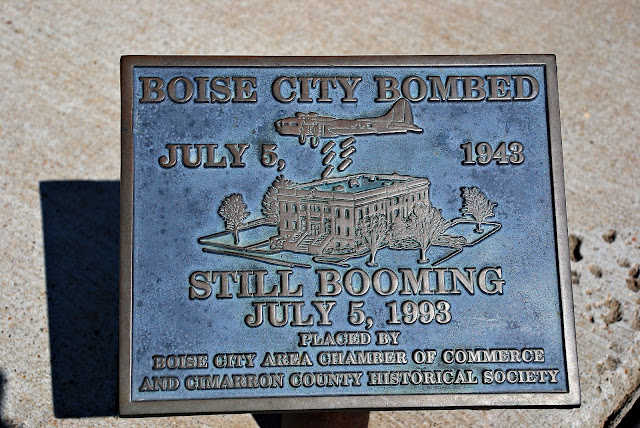 Boise City was the only city in the U.S. to be bombed during World War II, and it was done so by our own Air Force.  During a July 5, 1943 nighttime bombing practice run in their B-17 Bomber the crew mistook the lights of Boise City to be their target.  Fortunately they weren't very good at what they do.  The only thing destroyed was a garage which was doubly embarrassing since they were aiming at the courthouse.  One bomb did land in the town square but it was deserted at the time so no one got hurt.  The town made the best of the occurrence on the 50th anniversary by cementing in a fake bomb in a replica crater along with a commemorative bronze plaque.  The crew of the bomber was invited to attend the festivities but none showed up.
Probably still embarrassed, 50 years later. 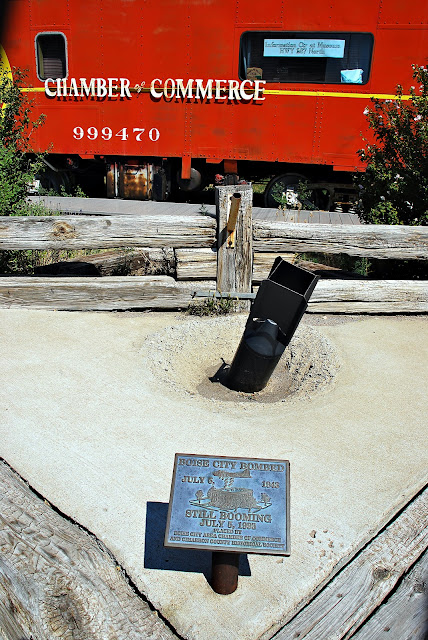 I found this particularly funny.

Incidentally, that is a railway caboose in the background that serves as the Chamber of Commerce for Boise City.

Have never heard of US bombing there own country, that must have been a shamefull mistake. I wouldn't had shown my face either there.

I never knew about this, but the commemorative bomb is pretty funny.

oh my goodness! didn't know this tidbit of history! yikes!

That is a funny memorial.

How embarrassing. I guess I wouldn't have shown up either.
It's fascinating to learn about the "hidden" things right around us.
Thanks for stopping by my blog today and leaving a comment.
Much appreciated.

What a great story!