At least that is what my information told me, that the Little House on the Prairie was just a few miles north of Caney, Kansas.  I drove and drove, stopped and asked, and drove some more.  It was more like 12 miles which so happens to be the same distance south of Independence, Kansas - 12 miles.  Could Caney be trying to work the cash cow that Laura Ingalls Wilder is?  I finally found it and was relieved to find something, judging by the setting, that I could actually believe in.  No one there and no signs of it being a tourist clip joint. 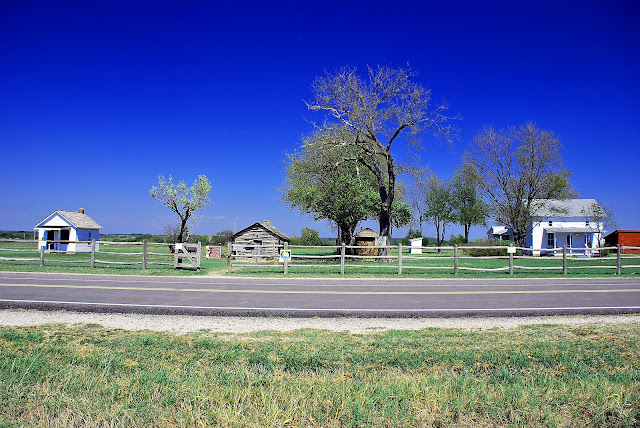 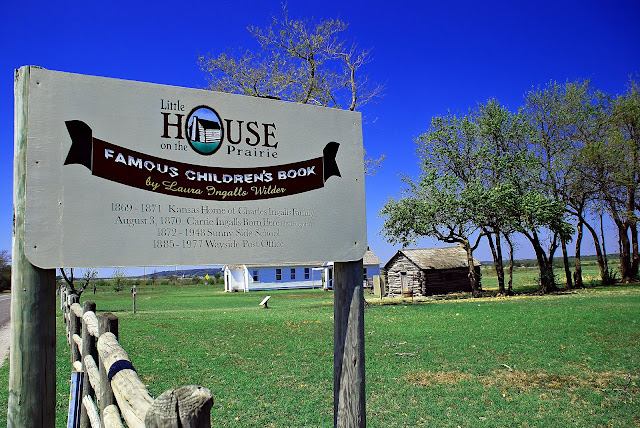 I admired the effort taken by the land owner at his attempt to faithfully recreate the log cabin as it was described by Laura in her writings. 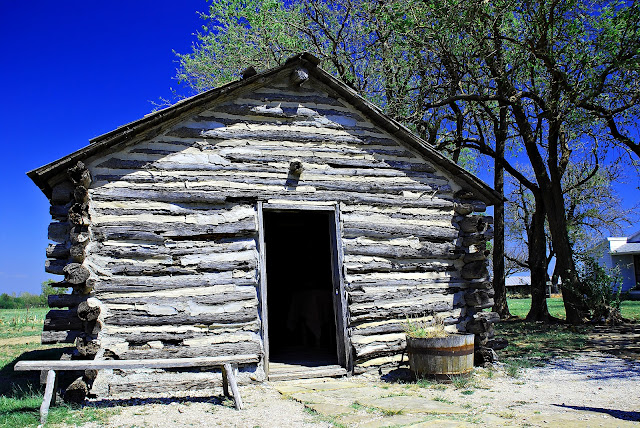 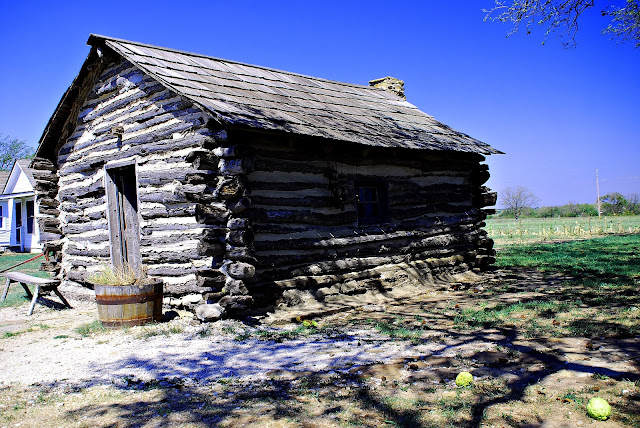 I felt inside was staged very well without going over the top. 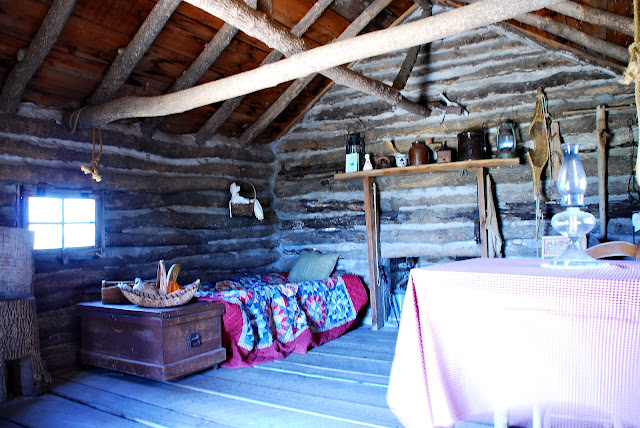 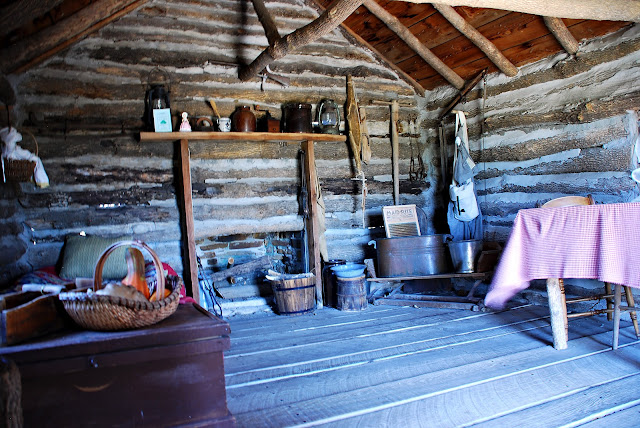 Now I admit it was my fault for not reading the signs that carefully.  I tend to get easily overwhelmed with all there is to take in when at something to see.  But I honestly thought the cabin was built, they lived in it for two years while Pa built a nicer home for his family, which still stood to this day, the house that is currently being used as the "visitor center". 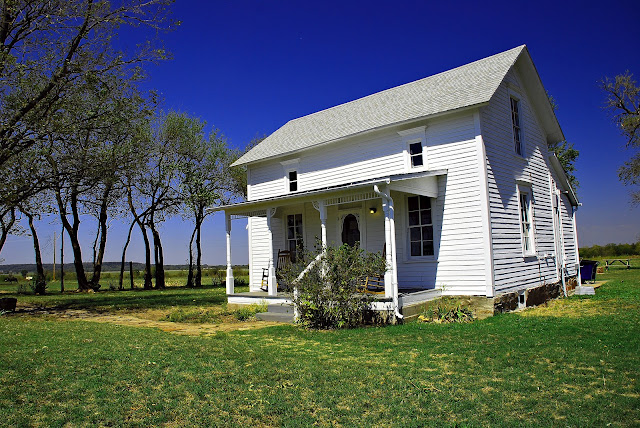 Inside was a small gift shop, nothing whatsoever like the other two abominations I was in before.  I talked with the woman inside asking all kinds of questions about the house which surely would leave no doubt in any one's mind - This guy thinks Laura's family lived in this house.  I asked about the two rooms in front, the one we stood in to the right was like a parlor, the left half a smaller room.  Behind a curtain leading to a back room was at one time the kitchen but is currently being used as an office, and upstairs - closed off - were two bedrooms.  There were no furnishings in any room except a rack and cupboard to display gift items, and the office equipment.  She said someday they hoped to open up the bedrooms for tourists to see.  I even asked if the wood flooring was original and she said it was.  I was greatly impressed but she never made an attempt to straighten me out by saying Now the Ingalls didn't live in here, you know. 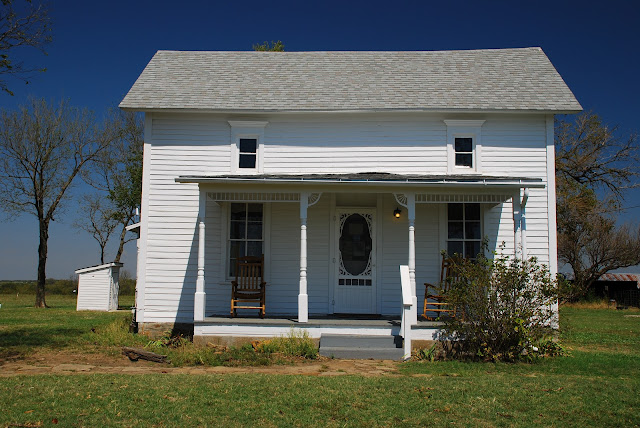 She said there were three previous owners of the property who had no idea of who originally homesteaded the property.  It was in 1969 that the current owner discovered that this was the Ingalls homestead and the birthplace of Currie Ingalls, only by the fact that a woman doing research on Currie determined this was the place.  She added that Laura and her husband Alonzo made a trip out to the area to try to find the farm but nothing looked familiar to Laura, which is understandable given her age at the time, 2-3 years old.  This too led me to believe she was searching for this farm house, not a long since gone log cabin.

So despite the fact I left there thinking I had been in the actual house on the prairie, I was pleased that I had finally found a Laura Ingalls homesite worth visiting.  And I knew that little Laura romped around in this backyard through the prairie grasses and that Pa had hand dug the well off to the right. 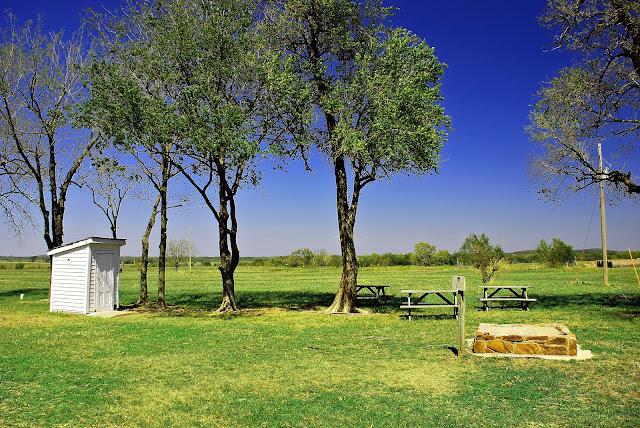 Or at least that is what I was told.
I left 5 of the 6 dollars saved from Mansfield in their donation jar,
and I am done with Laura Ingalls Wilder.

I think nothing has left of Laura Ingalls Wilder's homestead. When I see your pictures of abandoned houses, barns and RV's in the US everything must has gone to dust a long time ago. But your trip to find out her homeplaces was a funny story to read.She must have lived in many houses!

Some things are left better to the imagination, but I admire your fortitude in trying to find this homestead. ;)

she has become a vexation to you. :)

I never read the books, never watched the program, and never really wanted to see all this excitement. (But thanks for taking me along just the same, it has been intersting.)

Hi John...Myth or legend, if you are happy to have found the place you can now move on : }
I do love the cabin with all it's fixings and the adorable little house..thanks for the share!!
Grace

Nice history there. The skies are lovely.
Peace :)

Well... Laura is better in the imagination...I suppose! But i do love the photos of the cabin, yes I do! Hugs
BShell

Good to see the tourist dollar has been distributed to your satisfaction rather then levered out of your hands at the first opportunity.
Little House on the Prairie features quite strongly in the telly culture of British kids of a certain age - (them and the Waltons (of which both have about a million episodes)). So it's good to see some of the potential locations.