What brought us to Greensburg was the World's Largest Hand Dug Well - Big Well.  It was built in 1887, is 109 feet deep and 32 feet in diameter.  You can walk down into it via a spiral staircase. 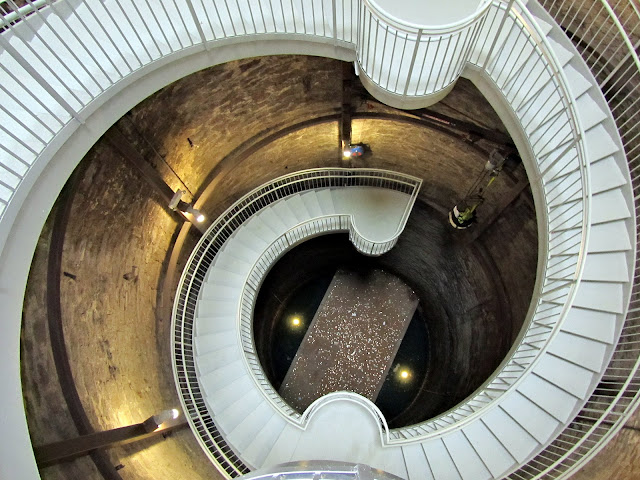 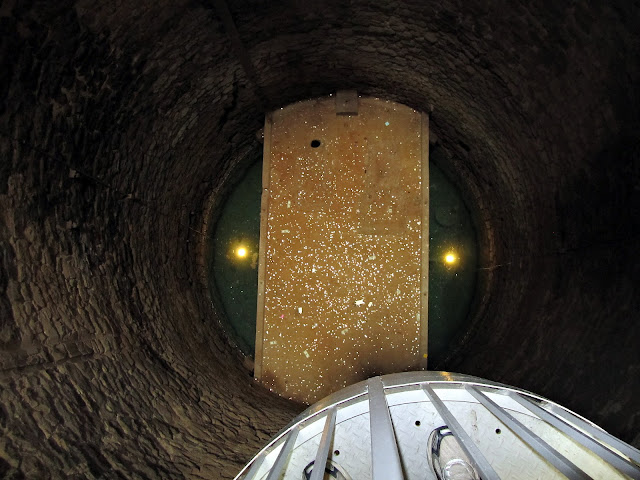 What I didn't realize until in the visitor center was that this is THE Greensburg, Kansas; the town that was literally blown off the face of the earth on May 4, 2007 by a 1.7 mile wide (2.7 kilometers) EF5 tornado with winds in excess of 205mph (330kph).  That is wider than the town itself and they don't rate tornados any higher.  This fascinated me more than the Big Well.

This is the view from the observation platform at the top of the center.  Every building you see is new since 2007.  You can see a lot of vacant lots too. 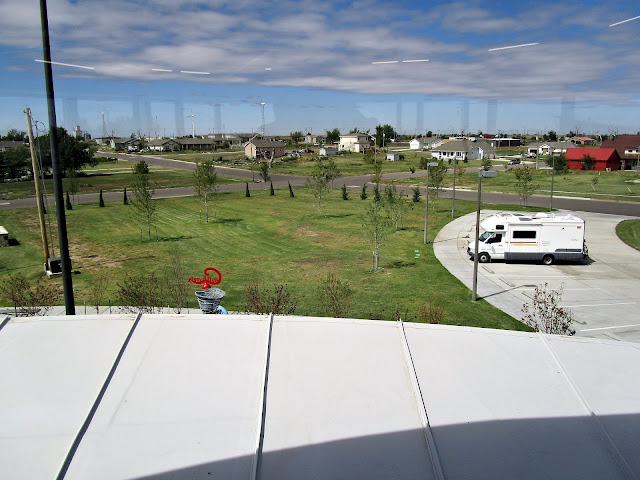 The grain storage in the distance is part of the 5% of the town that was not totally blown away.
I talked in length to the lady at the counter who I would say was in her late 60's.  She was a survivor of the event and told me of her personal experience.  She said that half of the people stayed and rebuilt their homes but the odd thing was, and she didn't understand it herself, that the majority chose to do so in another place in town other than where their current lot stood. 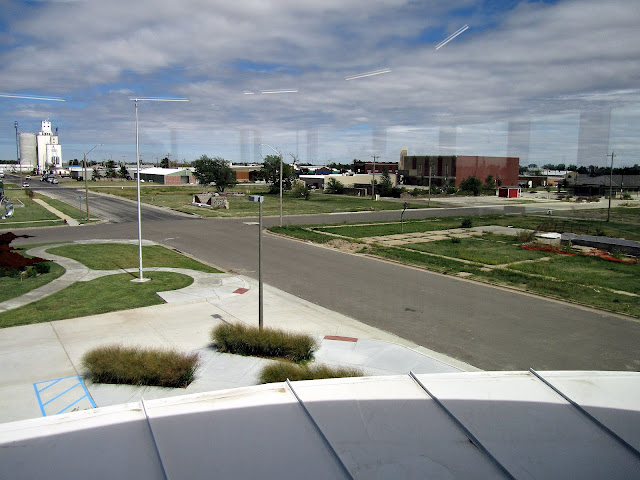 The residents knew at least 30 minutes advance from watching television that a huge storm cell was heading their direction that evening.  Her daughter called and suggested that she come over to her house as they had a basement.  Mom lived in a simple duplex and thought the storm wouldn't come to Greensburg.  Ten minutes later the tornado sirens began to wail and she got a call from her grandson.  "Grandma, get you butt over here NOW!"  She got in her car, drove the 5 blocks to her daughter's house and just barely got into the basement when the tornado slammed into Greensburg.  It was 9:45pm.  In 12 minutes it was all over and she, along with nearly everyone in town lost everything they owned.  11 people ages between 46 to 84 died.  Most of those were "old timers" who like the lady I was talking with believed that it would never come to Greensburg.  Her uncle was one of those 11 and they never found anything of his home or workshop.  Not a single tool. 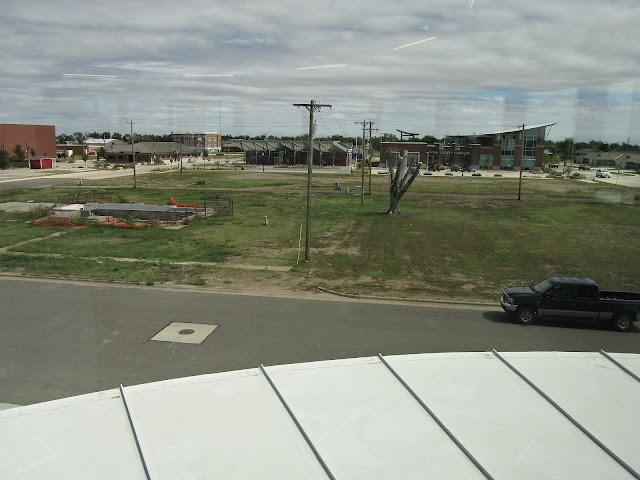 While she was talking with me the siren went off, noon I guess, but it scared me like no other time.  The adrenalin shot through my veins. I jumped and ducked at the same time and seriously asked her "What's that? Are we okay?"  She calmly just smiled and told me what it was, but I don't recall what she said.  I've always wanted to see a tornado from a safe distance one day, but after this visit to Greensburg, I am fine if I never ever see one - I don't care how far I am safely away.

This is the only siren that was found.  It sounded the warning till the very end, much like Gunga Din. 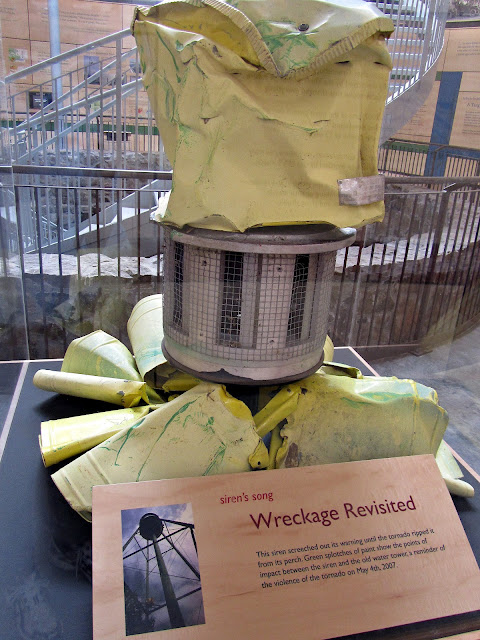 This is the only thing that survived from the library and every card was intact in place.
That is weird. 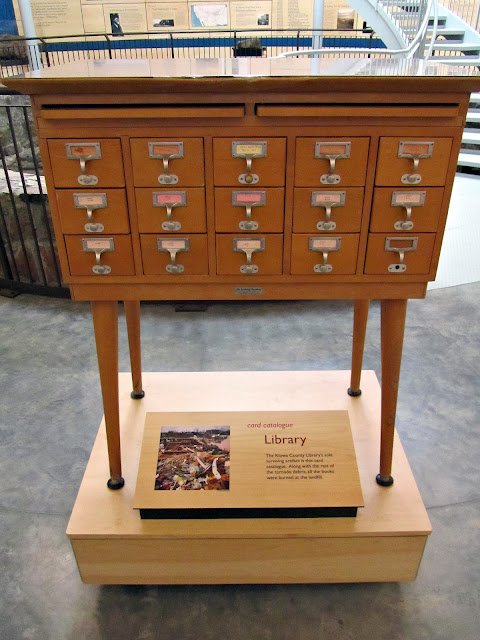 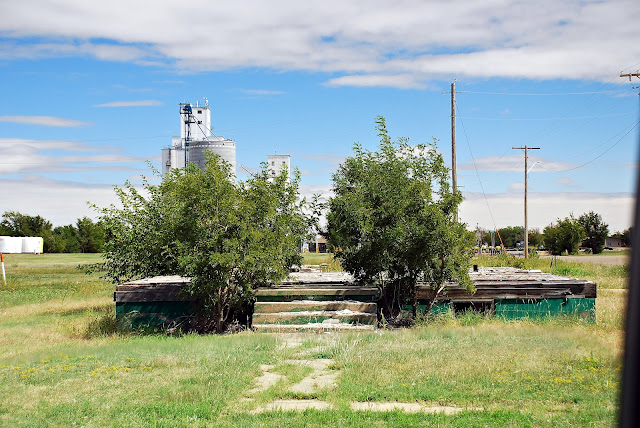 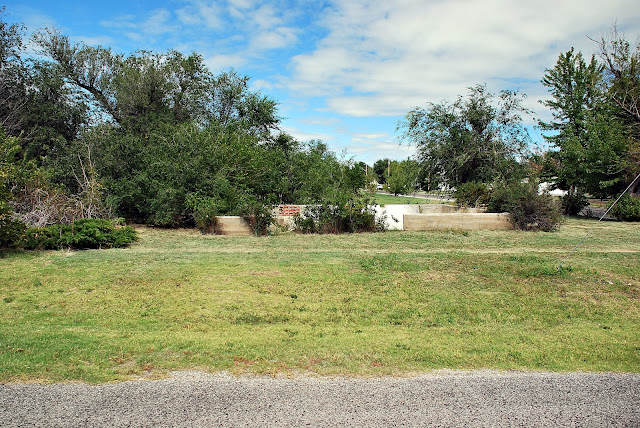 The writing on the left appears to read ameri -- core.  In the center is the address.  To the right of the door it looks like auntie when I zoom in on it.  To the right Please do chicken coop.
The lots all around and across the street were vacant. 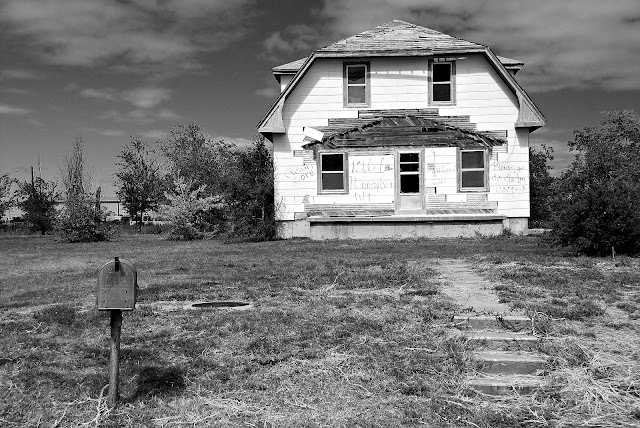 I am not trying to be funny when I say it made me feel uncomfortable writing up this post.  All those feelings I was experiencing while there, while talking with the lady, all returned as I read my notes.
People think we're crazy to live in earthquake country.
Give me an earthquake any day over a tornado or hurricane.
Our next trip will take us through the southern states.  Don't think for one moment I am not doing the research when hurricane season is.

I have seen movies and documenteries about hurricanes and I think it is one of the most scary nature disasters to be in. We only have some heavy storms so now and then but that scares me too. The sound and the unpredictable ways it goes. But it fascinates me how people cope with those scary expierences, like bushfires, earthquakes, floods, etc. Nature is stronger then we but we keep living in those areas. We live below the sealevel, why, I don't know, because we were born here?

I take it John, that you didn't walk down into the well; the photo is extra special. Interesting post and it would be quite hard to get over facing the adversities of such a natural disaster.

That is some story! We had similar things happen here with bush fires. In some places there seemed to be no reason behind which house burned and which were not.

Neither the hurricane of fire storm is a natural event I'd care to witness.

I might have freaked out too when that siren blew. What timing. It always amazes me when I see things like that library card catalog and one house untouched when another is leveled.

Very interesting today, John. I think that would have been a sobering thing to see - I live on the east coast where we have hurricanes...but we have also had some tornadoes close by in the last few years, and even 2 earthquakes. I am beginning to think no place is totally safe from natural disasters!

I totally understand what you are saying about your fears resurfacing as you were writing up the post. The hair on the back of my neck is standing up now, and the tornado that went through my home town was in 1979. It was just a little thing, and no one was killed, but I lived with the damage for several days. The images I will never forget - all the fences had tufts of pink insulation at the joins. A swing set in the living room of one of the damaged buildings. That's when I learned what reinforced concrete was, as the rebar was left after the concrete blew away. And all the hydro trucks from a couple hundred miles away, wandering around, trying to find where they were supposed to be fixing stuff.
Tornadoes are scary things...

i guess if you rebuilt on the same lot, you'd have that feeling of loss, of 'once was', of that devastation forever. by rebuilding across town, it is like a fresh start without memories there before. i can understand that need to 'untie'.

Interesting post. I can't believe the size of that well.

What an amazing post to read John I remember the news story and it's hard to believe it was in 2007.
Many thanks for sharing the story and of course your images.

That's quite an amazing spiral staircase. Makes me dizzy looking down that far.
So sad that that town was devastated by one cataclysmic event. At least with hurricanes, one has a little more warning.

This story was an amazing one. I have heard of nasty tornadoes and we get 'em here in Texas as well. But, the one you have described tops anything I have ever known.

The photos tell the story very well as well.