Through the Windshield from Behind the Wheel

Somewhere in South Dakota.
This was one of the first of these I saw poking along down the highway.  They don't grow hay like this in California so it was a novelty to me.  Then came the unnerving challenge of passing it while driving a small house.  After a couple of weeks of these it became no big deal but I never got away from the thought if one of those big Shredded Wheat biscuits ever came loose. 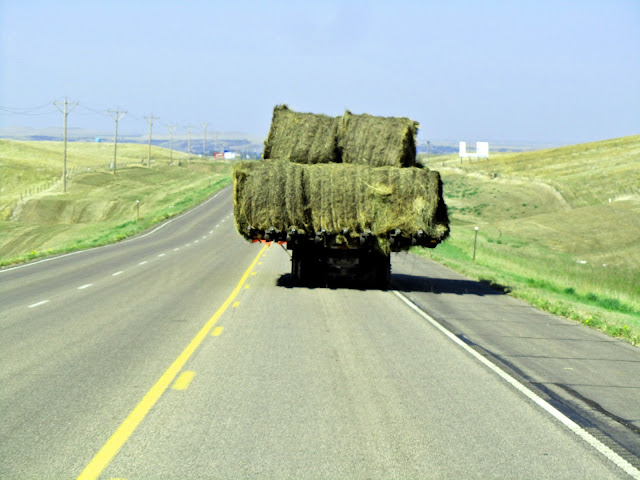 Salt Flats, Utah
This is an 87 foot tall art piece created in the early 1980's by European artist Karl Momen.  It stands along Interstate 80 in the salt plains of northern Utah.  There is nothing else around for miles.  I mean lots of miles.  There is nowhere to pull off to take a photo.  The traveler must do so while zipping along at 70 plus miles per hour or risk being run over by a big semi-truck if you attempt to slow down.  There is a breakdown lane for "Emergency Parking Only".  Some people have "emergencies" and pull over for a quick photo or two but heaven help you if the Utah Highway Patrol just happens by at that moment.  I've been by it several times over the years but was surprised this time to see it surrounded by barbed-wire topped chain link fencing.  Must be a Homeland Security thing protecting it from a possible terrorist act.  That is the westbound portion of I-80 you see in front.  I was way over on the eastbound half and as you can see by my photo, it is no easy task snapping a picture while at speed. 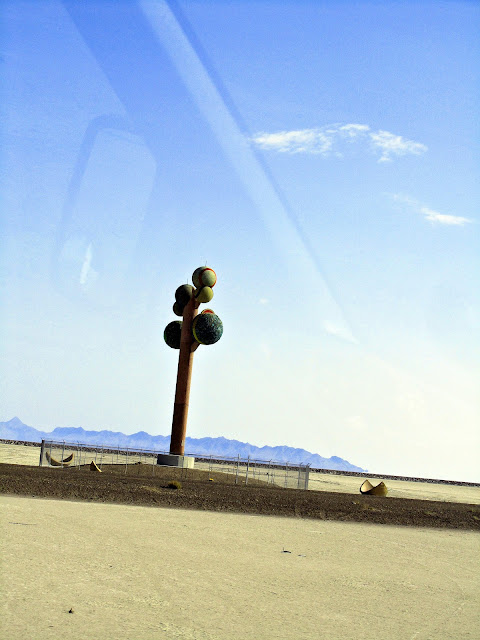 Near Jamestown Missouri,
reputed to be the most westerly point of any Amish community.  Okay, I respect anyone's religious beliefs but I just have to say, these people are absolutely crazy to drive their buggies down the road with so many idiots out there texting while driving.  Granted, they have no other route to take to get from home to town and back again, but there is a limit as to how far one should go with their beliefs before personal safety becomes more important.  I poke along on back roads myself, sometimes being a nuisance for those travelling the speed limit but even still at my pace, I came up on these buggies really quick when coming over a rise.  Just how serious of an offense is it to own a car when you're Amish?  Notice the traffic caution sign. 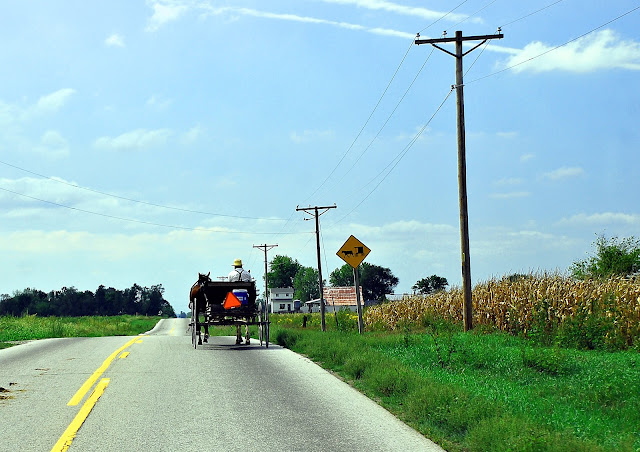 Anthony, Kansas.
Several times we came across really looong truck and trailer combinations hauling these tremendous blades, part of three blades for wind turbines.  You just do not realize how huge they are until they are at ground level.  This right turn took two attempts before the driver could complete the maneuver.  In another town police cars were stationed waiting to block traffic.  Several miles beyond I came upon the trucks heading towards town with their looong blades.  I observed trucks carrying gigantic oval containers that required the same type escort service.  I wondered what they were but never remembered to ask.  It just now dawned on me as I was putting this post together what they must have been - the generator body the props are attached to!  I was thinking storage tanks of some kind.  Whew, now I can sleep tonight! 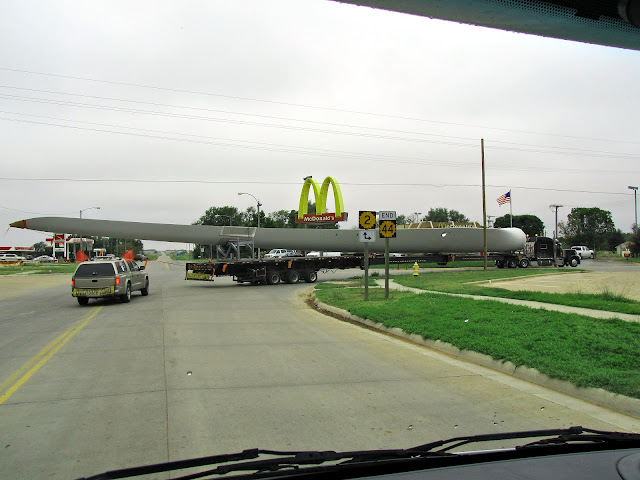 Mobridge, South Dakota.
This is the only drive-in movie theatre screen I saw in 7039 miles of driving.  Amazingly it is still in operation.  Known as the Pheasant Drive-in it operates from May through September screening double features during week nights and sometimes triple features on weekends.  The audio is through your radio as well as the traditional hang on the window speakers.  Admission is $5.  The snack bar favorite, the chopped bar-b-que beef sandwich.  Kids, if you've never been to a drive-in movie, you owe it to yourself at least one time in your life. 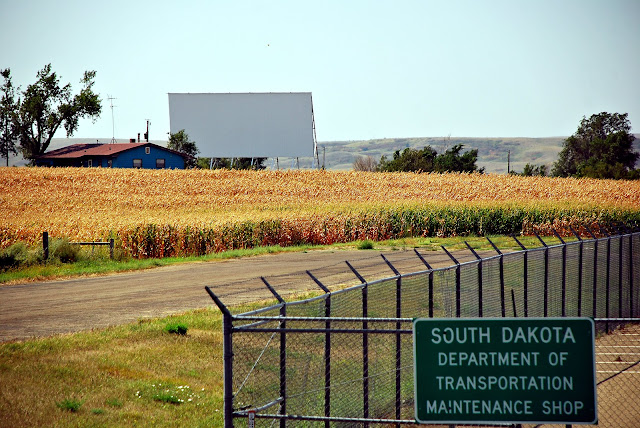 I remember back in the mid-sixties when the motorcycle Hell's Angels type of movies were very popular.  I took my girl friend to the drive-in to see the movie.  She wanted to hug and kiss - all that lovey dovey stuff.  I wanted to watch the movie!  And then there was the time when young and married with our baby daughter in her car bed in the back seat.  The movie industry was young with the new rating system and whatever movie it was it had a 'no one under 18' rating.  Believe me, it was mild compared to the PG-13 movies of today.  Anyway, they wouldn't let us in for my wife was under 18.  Good grief!  We're married, we have a child, she's gone through the joy and pain to be a mother.  I think we tried again another night.  Maybe I stuck my wife in the trunk and had our daughter up front with me.

those turbine blades sure are big. What a chore them to actually get them up where they belong; I'd like to see that process, and how they maintain them after that. The art piece along the highway, I wondered if the artist was somewhat miffed that it hadn't made it to some more up-front and in the public eye space? As you say, you can't pull over. Oh well I guess a price-tag was achieved and after that, who cares? Yes, the drive-ins, I remember that some would pull up outside, let the extra mates hop in the boot (you call it trunk), and then gain entry.

Nice post, interesting to see what obstacles you find on the road. Those Amish, I don't think they can go on like this for ever, you can't turn your back to future and close your eyes for the developements in society.

It's amazing what you come across while travelling John... thanks for taking the time to share yours.

that wind turbine blade is PHENOMENAL! thank you for sharing that! if the amish gave up their horse and buggy ways and also adopted electricity, they'd be mennonites. :) the hay bales are common here. yes, sometimes the trailer loads are trecherous and now and again one jumps the load and rolls off - scary!! that sculpture is weird.

thanks for sharing your road with us. :)

Hi there - that hay looks very green! But what do I know. I've seen a few of the turbine blades on the move and they really are huge!

I think the way to deal with texting and horse and buggies, would be to stop people from texting!

wow I'm loving that first photo. that scene is so common around here and I don't think I've ever considered that dangerous but I'm not driving a small house either. SW Wisconsin is home to some very large Amish communities and occasionally there are car/buggy collisions for not very often. The English and the Amish have learned to share the road. I've had a few close calls but I'm a slow driver and one quickly learns when/where the risk is increased. There have been days when I've seen more buggies traveling the road than cars. I really like the shot of the farmer from the rear. that windmill blade is unbelievable. I've only ever seen them attached and turning. Lucky you to see one in transit. Drive-in theaters are a dying breed but there are still several operating in my state - that's a big deal! love your date story. happy weekend to you and orange fur-ball.

Funny story about your wife. I've never been to a drive-in, although we used to pass one all the time on our way to and from the beach. I was always hoping we'd get stuck in a traffic jam so I could see what they were playing. One night I finally got my wish. I was about 8 or so. Unfortunately the movie was 'The Exorcist.' Pretty much scarred me for life.

Yes, that looks like what we will be getting!