Walnut Grove was the first place of residence for Laura Ingalls Wilder of Little House on the Prairie fame after the family moved from Wisconsin.  Although I never read any of her books and probably watched on a few of the television episodes, I am still intrigued with her story and looked forward to visiting the Laura Ingalls Wilder Museum in Walnut Grove. 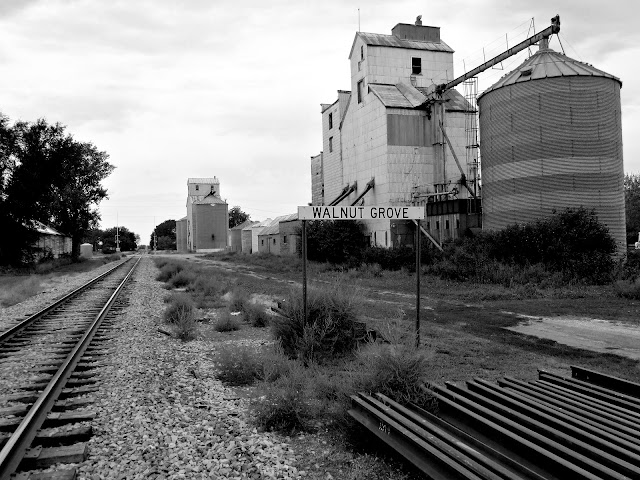 I walked into the gift store and was immediately struck by the amount of stuff available for purchase.  Besides reprints of her Little House on the Prairie books which looked more like Dick and Jane readers from the covers, there was anything and everything they could think of that could be remotely related to Laura Ingalls there for sale.  There were dolls, doll clothing, people clothing (bonnets, aprons, dresses, t-shirts), afghans, blankets, quilts, crafts, cookbooks, food items, books about the Ingalls family, books about the TV show, books about the TV shows stars, videos and audios, postcards, photos, posters, Little House on the Prairie refrigerator magnets, stickers and decals, even Little House on the Prairie beef jerky.  It went on and on.  I paid my $6 admission fee, received a small sticker to place on my shirt so as to prove I didn't hop the fence outside, a map to follow and proceeded on the tour on my own.

The first room, "Laura's Room", contained items that belonged to the Ingalls family where the biggest item of notoriety was Laura's quilt - a quilt she had has an adult and had given to her daughter Rose.  Not something she owned here in Walnut Grove.  There were write-ups about the family, a book and a few letters that belonged to the family, but all the rest had little or nothing to do about Laura herself.  I walked through the doorway into the next room and it was all memorabilia from the TV series with one of the episodes running on a small television in the corner.  The entire series was available for purchase on DVD.  I didn't linger here long.

The rest of the tour outside consisted of a "Chapel" constructed by the high school shop class in 1983, a garden of "Prairie Plantings - grasses that covered the plains in Laura's time", "Grandma's House" with furnishings from the time period but was built in 1890; eleven years after the Ingalls left and as the brochure itself states "...and has no connection to Laura".  And this went on with a "Little Red School House" built in 1986 again by the high school FHA this time, an early 20th century outhouse "NOT for use - step inside for a great photo opportunity"  [I am not making this stuff up. This is direct from the museum guide pamphlet], an "Early Settler's Home" moved in from somewhere else, and "Heritage Lane" containing objects from Walnut Grove's heritage.


Heritage Lane was about the only thing I felt worthwhile as it had among other items a covered wagon filled with what would be all the worldly possessions of a typical immigrant family and gave a good idea as to how limited they were with space.  Imagine you're moving across the country, a trip that would take months to accomplish and this is all you could take with you. 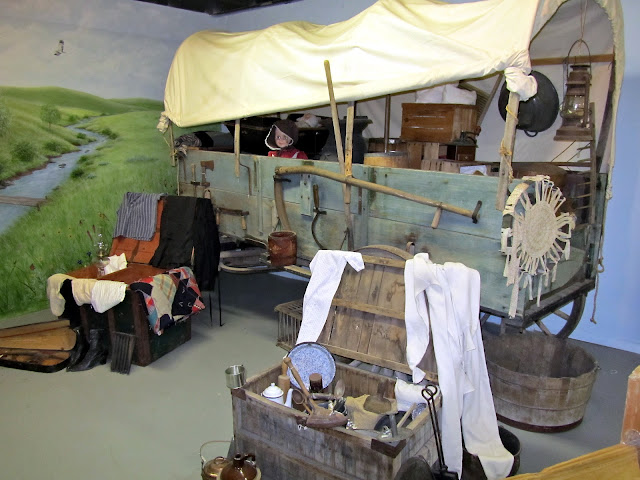 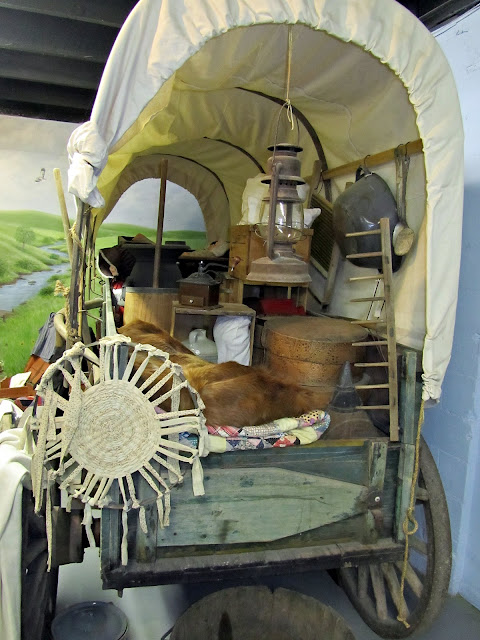 The mural on the back wall displayed an artist's renditioned of what the Ingall's dugout may have looked like on the banks of Plum Creek.  Notice to the left, the Ingall's had electricity! 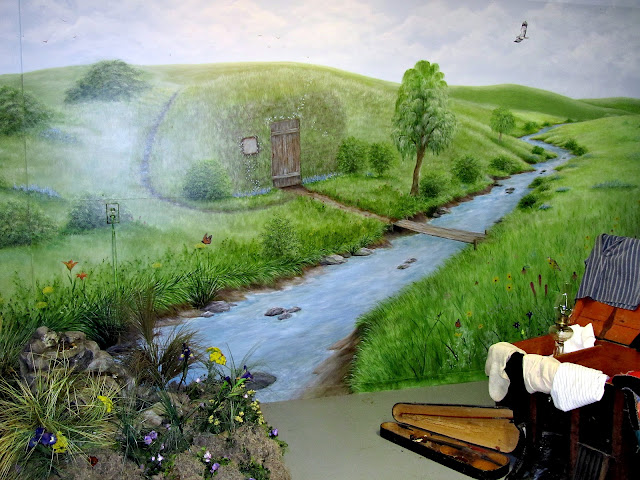 My research at home revealed that a couple miles north of Walnut Grove one could so see the actual site of the dugout Laura and her family lived in along the banks of Plum Creek.  This was my main purpose for coming to Walnut Grove.  Somewhat disenchanted by the whole museum experience, I got into the Little House on the Highway (see, I've always had respect for LIW) and drove the few miles north.  The signs led me up a farmer's gravel driveway, around back where I was greeted with this. 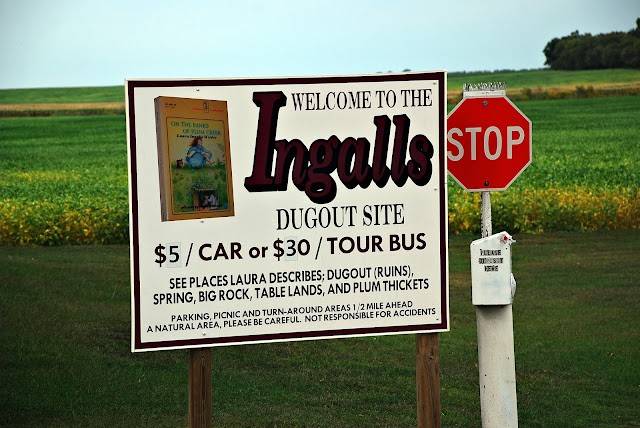 By now I have had it.  The museum was a complete sham, and now this.  While at the museum I saw this photo of the dugout site and took a picture of it.  Good thing that I did. 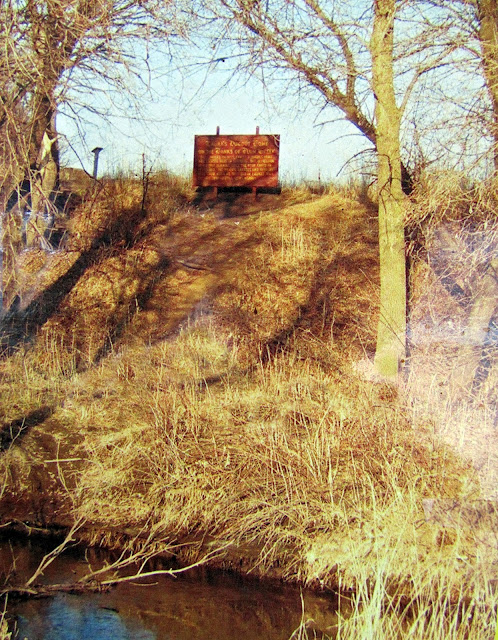 Here I was expected to pay $5 to view a low spot in the side of a creek bank, something that wasn't even known of until in 1947 when the illustrator for Laura's books informed the land owners that their new farm had once been homesteaded by Ingalls and that "unusual depression" may have been their dugout site.  I turned around and left.


And this came to be a common theme on the Laura Ingalls trail.  I was to visit a couple more places along our travels and it seemed that if Laura spent any time in any place, that town would seize the opportunity to capitalize upon the Little House on the Prairie fame.

Oh my, what a shame. My daughter was besotted with the books and read them many times. The tv-serie we had to watch too. It is a real deception to make a museum with nothing original and to ask so much money for nothing. I wouldn't have visited the "dugout" either.

In addition to the interesting journey you made, you have saved a lot of people the wasted time and effort to go visit those places. What a ripoff! I guess I can understand the pride that the community might feel, but to capitalize on it that way seems so wrong!

interesting John ... I am being flippant when I ask what is the item hanging with fabric strips in the fourth last photograph? It kind of reminds me of a dream-catcher!

Industrial landscapes seem to work so well in black and white - I really like that first image.

I loved the Little House books and still do... but I'd save my five bucks as well. I'd rather re-read the books.

i am certain the town of walnut grove had no idea they should hang onto relics from that era until it was too late. only with the popularity of the series did the fascination really begin for the next few generations...

even if the trip was not a success - which has led the betriftt seen - I think it's kind of interesting. I know the TV series "Little House" also from the German television. I was a child very pleased with this family! Somehow, very exciting!
Many thanks to you, that you put me on this little trip down memory lane.
Your photos are great!

It's almost an insult to the pioneers, including LIW, that a museum like this could be running. It really seems like a money grab. Still, it is enlightening to realize how little they could have carried with them in those covered wagons!!

Wow what a rip off is right.

I know someone who did the journey to Ann of Green Gables and was fully disapointed as so far they traveled to be in dismay.
Small and pricy.

The book reading was better and the doll sold in more closer to home shops. For sure one pays for the tourust attraction.

I admire your photos though. Thank you.