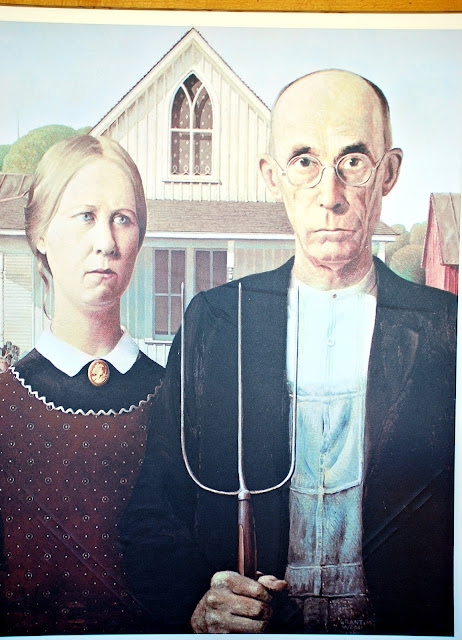 I came to learn that this painting is the second most recognizable painting after the Mona Lisa.

When I discovered in my research for the Great Plains Tour that the actual house used in the painting still existed (to be honest, I didn't know there was an actual house) I just had to go see it. 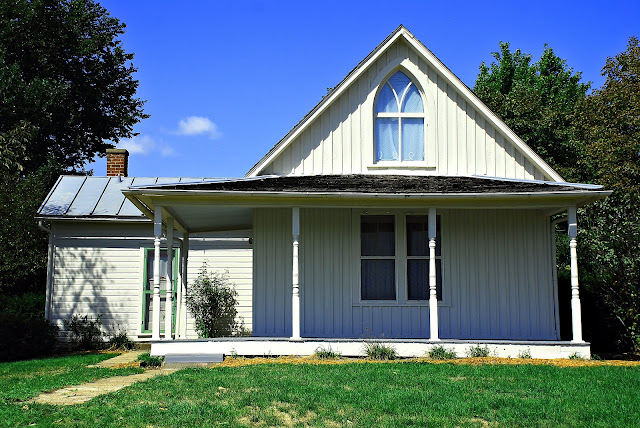 It is a private residence and people currently live in it, so they request you to stay back.

Here is the complete setting with house and museum. 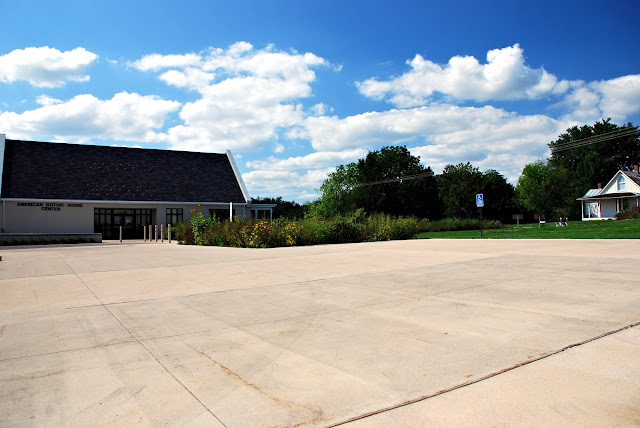 Two signs that pretty much tell all you want to know 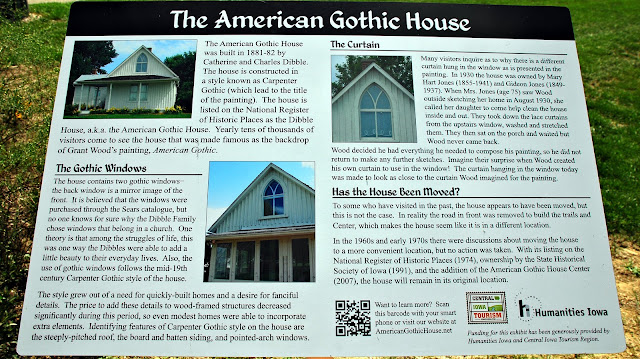 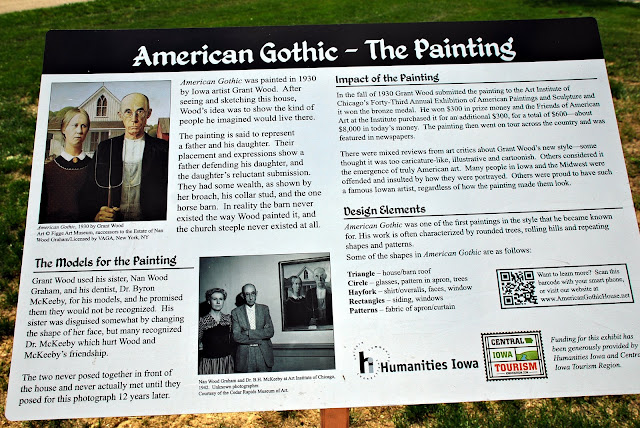 I think you can read it - I could on my screen.  The part in the second sign about the models is interesting.  The sign doesn't really go into it but Dr. McKeeby was thoroughly peeved over this and he still looks so 12 years later.
Here they are. The only photo from inside the house, of the upper story and the curtain. 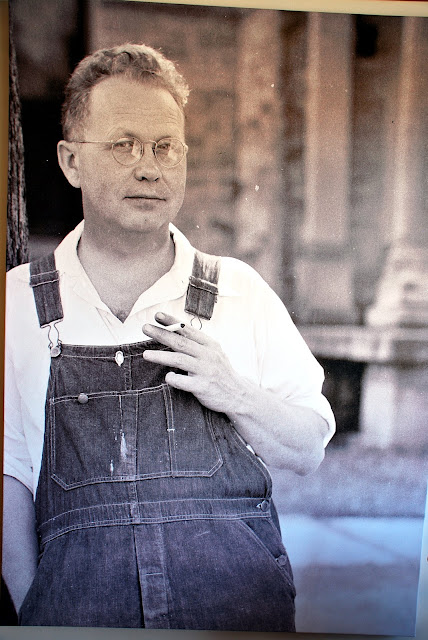 The museum had displays of various ways the theme of the painting had been used throughout time. 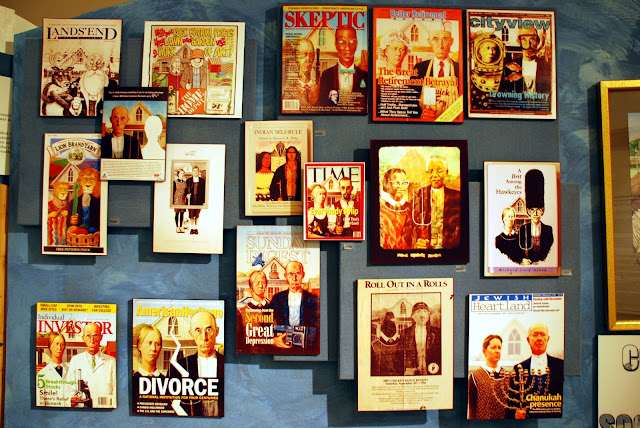 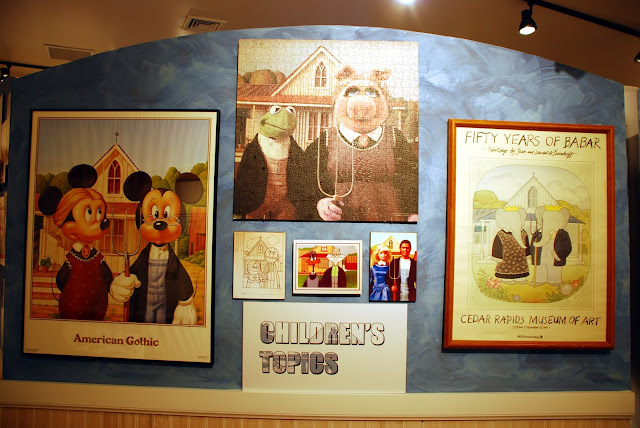 Plus they had several costumes available so that you and the missus could dress up and pose in front of the house.  The museum caretaker was more than happy to come outside and snap your shutter for you.  I could only imagine the stories she could tell of all the people she's photographed.  Yeah I know, camera jiggle. 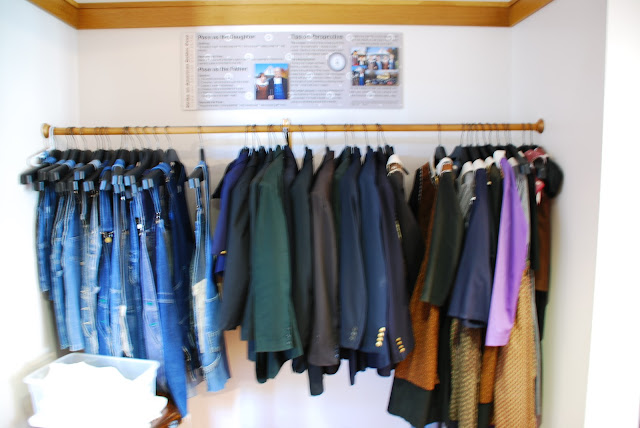 They even had pitchforks to accommodate all sizes.  Notice the short child size.  Wouldn't that make for a cute picture of your little boy and girl together?  Just as long one didn't go after the other with the pitchfork. 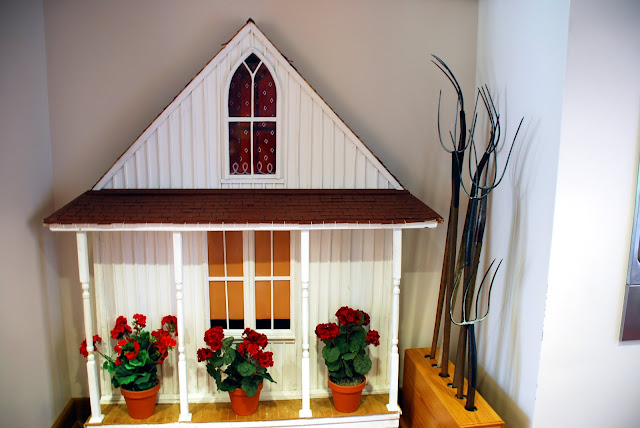 I thought the painting (one I've never seen before) was very well done. The facial expressions so realistic. Interesting post John.

Love this post. It is amazing the man still looks the same after 12 years! The magazin covers are very funny, you can use the two people for everything, even divorce articles.

I have wondered about this painting. Somehow I knew it was supposed to be a daughter and her father, not a wife and husband, but I didn't know much else. Your Americana trip this year was fantastic. Thanks for sharing your finds, John!

i have never thought of that in terms of father and daughter. always hard-working, hard-living husband and wife. thanks for the education today, john.

Great topic! I might be going to Iowa next week...I'll have to see if this is on my way!

Very cool. I like the Miss Piggy version best.

I'm not the least bit surprised that it is the 2d most recognizable photo. It seems like hardly a week goes by that you don't see it in some version or another. I'm absolutely amazed that your first commenter says she's never seen it before. Sooooooo, when are you going to post the photo of you????

P.S. Like some of the others, I'd never noticed that it was father and daughter before.

I never knew it was a real house either. Very cool story.

Not only the most recognized American painting but probably the most satirized. I had a teacher who collected the riffs on the composition. They were endless. Had no idea the church/farmhouse was real and still existed.