Being that our San Francisco Giants recently won the World Series of baseball perhaps it is appropriate to have a baseball themed mural for Monday Mural. 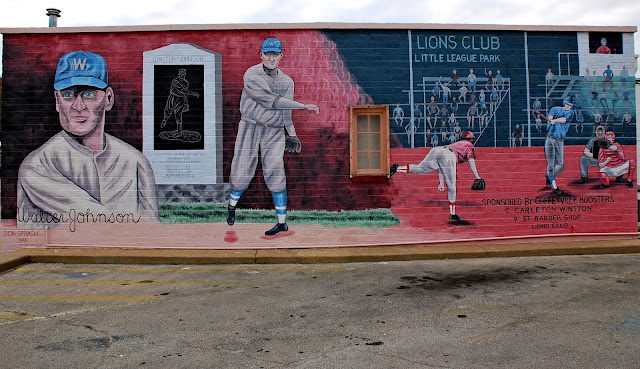 So who was Walter Johnson?  I didn't know and looked him up on Wikipedia:
Walter Perry Johnson (November 6, 1887 – December 10, 1946), nicknamed "Barney" and "The Big Train", was a Major League Baseball right-handed pitcher. He played his entire 21-year baseball career for the Washington Senators (1907–1927). He would later serve as manager of the Senators from 1929 through 1932 and for the Cleveland Indians from 1933 through 1935.
One of the most celebrated and dominating players in baseball history, Johnson established several pitching records, some of which remain unbroken. He remains by far the all-time career leader in shutouts with 110,second in wins with 417, and fourth in complete games with 531. He once held the career record in strikeouts with 3,508 and was the only player in the 3,000 strikeout club for over 50 years until Bob Gibson recorded his 3,000th strikeout in 1974. Johnson led the league in strikeouts a Major League record 12 times – one more than current strikeout leader Nolan Ryan – including a record eight consecutive seasons.


I gave up on baseball long ago for a long list of reasons, most of which applies to every other major sport of today.  But back in the time of Walter Johnson and on through the 50's and 60's, yes I would be a fan of the game, where players played for the love of the game rather than the love of money and fame.
Coffeyville had every right to be proud of their baseball hero.

This is a very elaborate mural, and thanks for your research, I would never have known.

a nice tribute in form of mural

nice mural- it looks like a much calmer sport than one might ordinarily expect.
I am from Toronto -- I gave up on baseball, too.

Someone thinks enough of Walter Johnson to keep his memory alive in a neat looking mural.

A nice way to remember someone and in the same time make a dull wall interesting. Also keep artists at work. That kind of remembrance does not exist in the netherlands. Perhaps it is time to change that.

It is a very beautiful mural and so typical american. Yes, money changes the world everywhere, also in sports.

wow, what a fantastic mural. it's very well done, and I like the little window in the middle of it. I agree with you about all the money in sports - and politics, and everything. those were the good old days, when people were actually looking up and out into their world rather than down into the palm of their hand. happy week to you and Sinbad.

The players had to play because they loved the game since they didn't get paid much but the owners were certainly doing well at the time with the cheap labour costs. It has probably rebounded too much the other way but the owners are the ones offering the ridiculous contracts of today.

Great way to segue to the Giants win :-). Nice mural, especially love that it was sponsored by the local Lions Club and Barber Shop, nice to still see community support for things like this.

I really like the nostalgia of this mural, celebrating a hometown hero and a bygone era. I recognized his name but couldn't tell you anything about Johnson, so appreciate the information. This mural has been up for over 20 years and still looks fresh. More town pride I suspect. Thanks for contributing to Monday Mural.

this is a nice tribute