On Route 66 at the Continental Divide 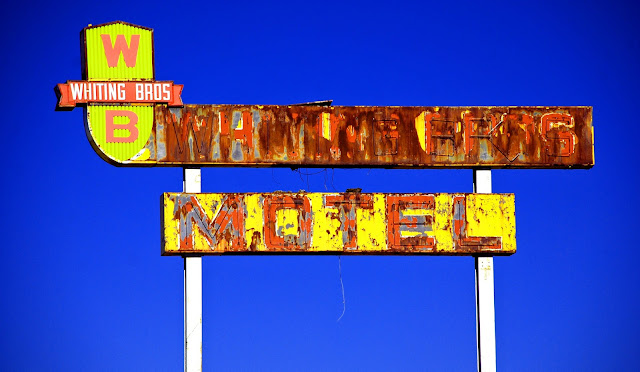 This beauty stood right where the waters decide if they will flow east to the Mississippi River
or west to the Pacific Ocean.

The first Whiting Brothers gas station was built in 1926 along Route 66 in Arizona.  It proved to be a very profitable venture and the brothers built more stations throughout the southwest adding souvenir shops, cafes and motor inns.  Like many other businesses on the Mother Road though, the Whiting Brothers ended in 1990's.  Except for one station in New Mexico which is still operational, pretty much only the fading yellow and orange sign remains marking the spot where a Whiting Bros. Station once stood.


I came across this image of their road map on the Internet.
Would love to have one.

talk about a great rust job.

That is great to see the sign on the map. Route 66 is magical I think.

I remember when you used to see these all over. Great sign.

Hi John...yesterdays post cracked me up...must have been some good old redneck boys!! The fake deer is a winner : )!!
Great history...to bad the sign will rust away!!
Grace

Rusting signs are some of my favorites.